When I found out I would be one of the first people to watch Avengers: Infinity War, my world stopped. Honestly, I was afraid I was going to pass out. What a huge honor it would be to see this movie surrounded by the filmmakers and the cast at the World Premiere! Infinity War is likely going to be the biggest movie of the year – after all, it is 10 years in the making. I thought I was ready, but there is honestly no being ready for a movie like this. You can read my spoiler free review for all those details, but getting to the theater was half of all the awesome to be seen that night!

The lights, the people, the BUZZ – things were electric on the Avengers: Infinity War red (purple) carpet. Not to toot my own horn, but I have previously been to three Marvel red carpet premieres, but this, this was whole new beast. I could literally feel the excitement. Every one there could not wait to watch this movie – myself included. For the first time ever, this premiere was being held at three theaters in Hollywood – all connected by the giant red (purple) carpet. This giant carpet was split into rooms and rooms of Marvel memorabilia – tons of costumes and props. All of them equally amazing. And I wanted to take the time to inspect them up close.

I thought maybe I could take on Thanos.

Guardians of the Galaxy Space Pod

It is no secret that this was going to be a huge movie, so I am sure there were endless numbers of ticket requests from celebrities. The cool thing was, they were just like the rest of us Marvel fans! I saw many taking photos with the memorabilia that was on display. That doesn’t surprise me because the stuff we saw was so cool, even basic fans would be excited to see them in person! Luckily, I did get a couple photos with some celebrities on the carpet.

I spotted Henry Simmons from Agents of S.H.I.E.L.D. on the Infinity War Carpet!

The night we arrived in LA we were surprised with an addition to the itinerary – for the first time ever press was invited to the after party! Normally, this is not an option with Marvel movies, so I was really excited about it. To mingle with the cast after the movie was something I cannot even describe efficiently. Hearing them talk about how they felt about scenes in the movie and the final product, it was amazing. There really is no other way to say it. Talking to Kevin Feige, the President of Marvel Studios, about my reaction and even my theories about Avengers 4 – who else can say they’ve had a moment like that. I also briefly talked with Michael Rooker, Henry Simmons, and Taika Waititi. I just had to ask Taika about the What We Do In The Shadows TV Show. He said things are moving along nicely!

I ran into Henry Simmons again at the after party and he wished me a happy birthday!

Micheal Rooker and I chatted about Yondu and tattoos at the after party.

Ross Marquand from The Walking Dead told me that my Guardians of the Galaxy tattoo was amazing, and that pretty much made my night! 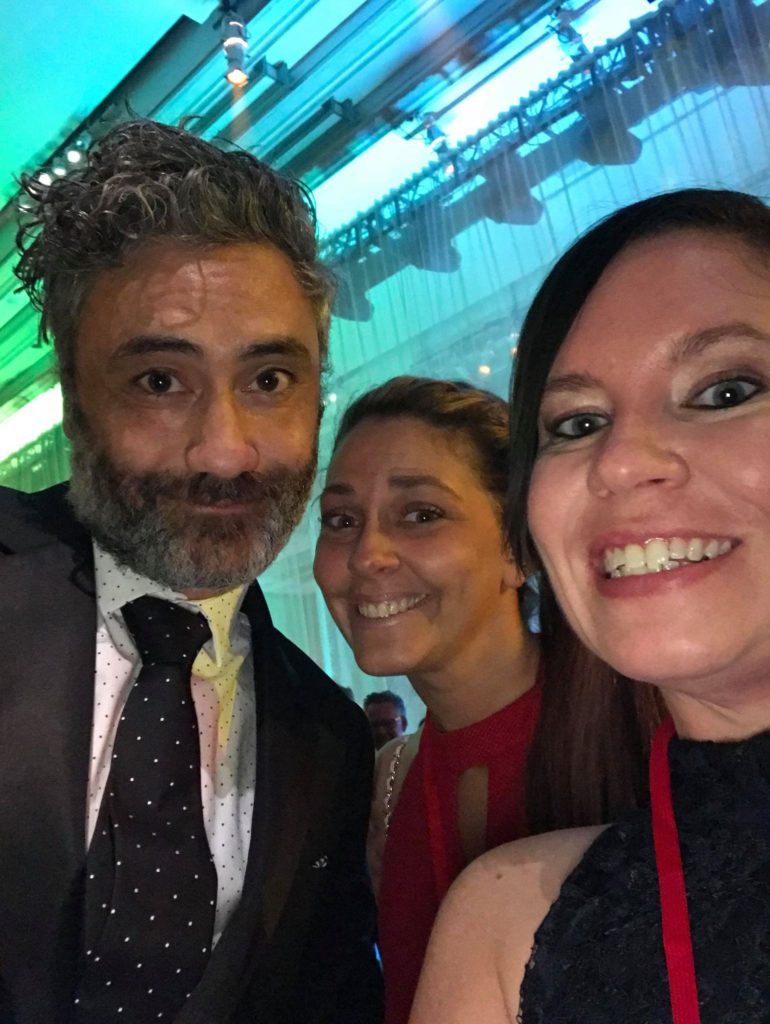 I was excited to ask Taika Waititi about the What We Do In The Shadows TV Show – he said it is coming along!

We rang in my birthday at midnight at the Avengers: Infinity War after party.

Iron Man, Thor, the Hulk and the rest of the Avengers unite to battle their most powerful enemy yet, Thanos. On a mission to collect all six Infinity Stones, Thanos plans to use the artifacts to inflict his twisted will on reality. The fate of the planet and existence itself has never been more uncertain as everything the Avengers have fought for has led up to this moment.

What It Was Like To Attend the Ralph Breaks The Internet World Premiere!

[…] have a full review coming up soon so stay tuned. I have only been to one after party before, for Avengers: Infinity War, so I was excited to find out we were invited to attend this one as well. My friend Amanda from […]

Chris Pratt Confesses to Stealing Something from the Guardians Set

Behind The Scenes: My Day On The Set of Captain Marvel

[…] I was in town for the Avengers: Infinity War World Premiere, I also got to do something amazing. The afternoon before the premiere we were brought to the set […]

[…] I went to the Avengers premiere, you could not shut me up. At one point when Scarlet Witch was trapped alone [in the trench]. And […]

[…] amazing experience and I do normally have fun while I am there. In the past I have done things like walk red carpets, interview amazingly talented celebrities, and see movies weeks before they hit theaters. Helen […]