Clouds is a heartbreaking movie based on the true story of Zach Sobiech and his battle with cancer. Have tissues handy when you watch this one. 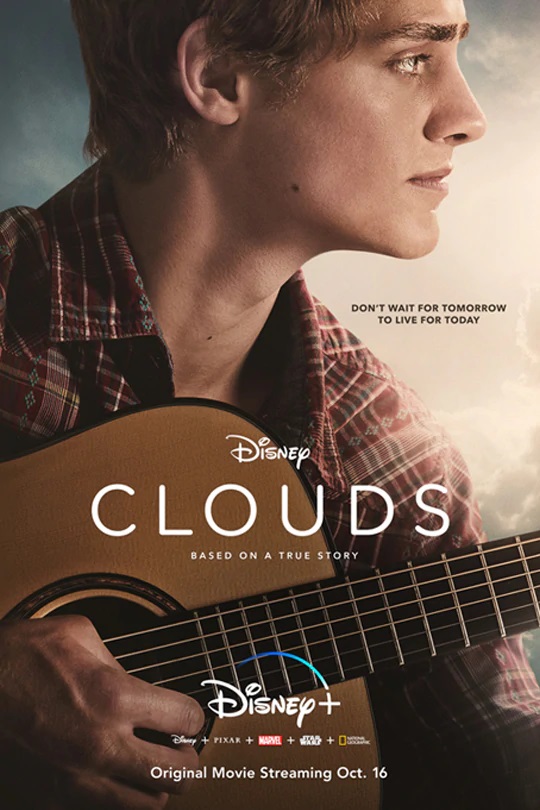 It seems like there have been an abundance of movies based on a true story that make me cry like a baby lately, and lets just go ahead and add Clouds to the list. This movie is based on Zach Sobiech’s battle with cancer and the song that he left behind for all to enjoy, “Clouds“. He also did so much more than that including starting a fund for childhood cancer.

I did not know Zach’s story before watching this movie, which is coming to Disney+ on October 16th, but of course I went down a rabbit hole of reading about him after. What an inspiration he was. To be so young, and to go through what he did, and still have such a positive outlook on life. One of my favorite quotes from Zach in Clouds is “You don’t have to find out you are dying, to start living.” See, I told you he was inspirational.

Fin Argus plays the lead role of Zach and I have to say, he did a great job. He really made me care about this character, and his life. I am sure playing someone who was a real person is a little daunting. You have to feel like you don’t have as much creative freedom as you normally do as an actor. Makes me wonder if he spent time with the Sobiech family to perfect his role.

Sabrina Carpenter play Sammy, Zach’s best friend, and I just adored seeing her shine in this role. She is one of my favorite actresses, who I have had the pleasure of interviewing. And yes we get to hear her sing a lot in this film, and I am so glad that we do.

I will say that Neve Campbell in this role made me feel old. Really old. She did do a great job as Zach’s mother though. As a mom myself I could feel her frustration, her grief, and her sadness. Her performance in this movie really stood out to me, even though she is clearly just a supporting actress. I probably connected with her because I am a mother myself.

The pacing of Clouds isn’t great. The story gets bogged down about halfway through, but it doesn’t take too long to pick back up again. Knowing what was going to happen did not help, it was almost like let’s just rip off the Band-Aid and get it over with. Which could be more of a me issue than a movie issue.

The film does clock in at just about two hours, and I think it could have dropped twenty to thirty minutes off and still gotten its point across. However, it didn’t ruin the movie for me. Plus being able to watch this at home means you can take a quick snack break or get up go to the bathroom if you need to.

Clouds is coming to Disney+ and this movie is one that will really hit you in the feels. The fact that it is based on a true story makes it that much sadder, but also that much more inspirational. If Zach can live life to its fullest, can’t anyone?

Inspired by an incredible true story, “Clouds” is a poignant and beautiful look at the heartbreaking duality of life and a testament to what can happen when you start to live as if each day might be your last. Zach Sobiech (Fin Argus) is a fun-loving high school student with raw musical talent living with osteosarcoma, a rare bone cancer.

At the start of his senior year, he is ready to take on the world, however when he receives the news that the disease has spread, he and his best friend and songwriting partner, Sammy (Sabrina Carpenter), decide to spend Zach’s limited time following their dreams. With the help of Zach’s mentor and teacher, Mr. Weaver (Lil Rel Howery), Zach and Sammy are given the chance of a lifetime and are offered a record deal.

Along with the support of the love of his life, Amy (Madison Iseman) and his parents, Rob and Laura (Tom Everett Scott and Neve Campbell); Zach embarks on an unforgettable journey about friendship, love and the power of music. The movie is based on the memoir “Clouds: A Memoir” by Zach’s mother, Laura Sobiech.