This post is in no way sponsored. All opinions expressed are 100% my own.

You might not know this but the first time I watched Agents of S.H.I.E.L.D. was when season one premiered. I struggled through the first episode and could not get over that Coulson was alive. Yes, I love the man, but how was he alive? He died in The Avengers. It happens all the time in the comics, but this was something I was unsure of in the MCU. Well, years later I ended up binge watching seasons one through four of Agents of S.H.I.E.L.D. – and boy had I been missing out!

I am so glad I decided to watch Agents of S.H.I.E.L.D. for several reasons. Honestly, once I got past the first half of the first season it was easy sailing. As with many shows they are building up their characters and some parts can be slow or uninteresting. And as for Coulson’s death and re-birth. Yea, I was here for it. They explained it really well and I not want all the dusted Avengers to take a trip to Tahiti (you will understand that soon if you haven’t watched it).

Warning: There are spoilers for the first 5 seasons of Agents of S.H.I.E.L.D. ahead.

Ties to the MCU

Believe it or not, Agents of S.H.I.E.L.D. ties in really well to the MCU. There are references to Thanos in Season 5 and I am DYING to see how they handle the snap heard around the world. I am willing to bet they pushed the release date to May so that people had time to see Avengers: Endgame first. Marvel is not playing around. 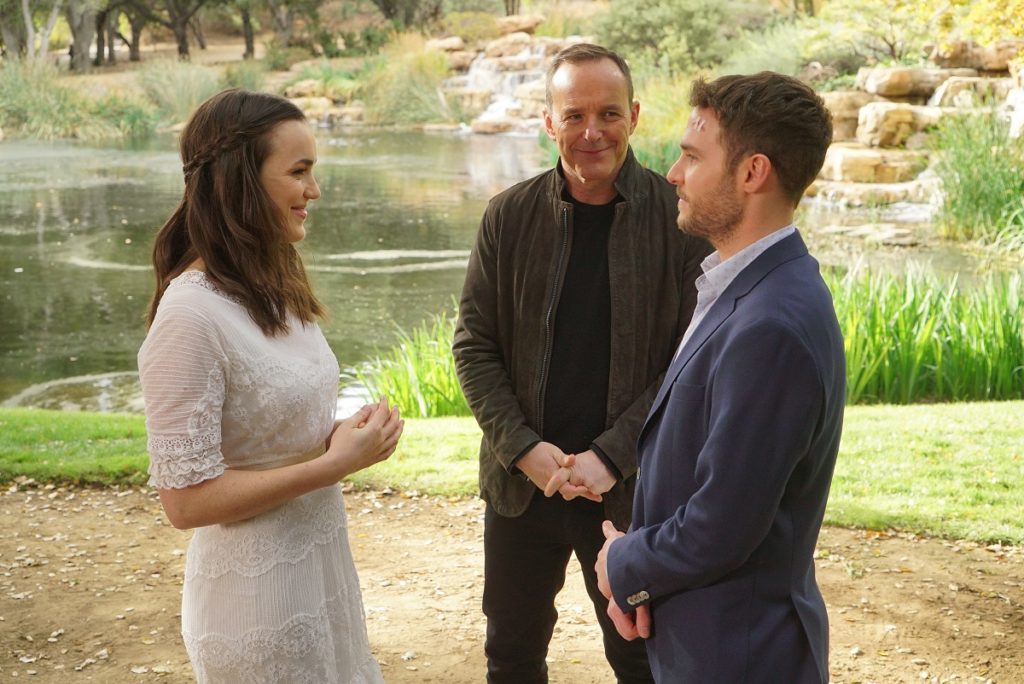 I am obsessed with this couple. They are insanely adorable and I love them together. I adore Fitz (the actor was in Overlord and was phenomenal by the way) and just want to see him happy. These two are like star crossed lovers, and it takes forever for things to work out between them. When they tied the knot last season, I cried. Like a lot.

I spotted Henry Simmons from Agents of S.H.I.E.L.D. on the Infinity War Carpet!

I am hyped that Mack is now the head of S.H.I.E.L.D., but at the same time totally bummed that Coulson is gone. Is he dead for real this time? Who knows. Ugh. Can never count anything as final in the Marvel Universe. I was lucky enough to meet the actor who plays Mack, Henry Simmons, on the Infinity War red carpet and he was super nice. It makes me love his character even more, and I cannot wait to see what is in store with him for season 6.

One of my favorite parts about last season was getting to know the Kree more. While I do prefer the Skrulls to the Kree, we have seen more Kree in the Marvel Universe. There is a LOT on them in Agents of S.H.I.E.L.D. so if you wish to get to know them more, that is the show to binge. Honestly, some of their parts dragged a bit last season, but overall I loved it. You probably know about Captain Marvel‘s run in with the Kree in the MCU by now, so they are a big part of the universe.

There are so many other reasons to watch this show. I fell in love with Daisy Johnson, we get a TON of Inhumans references that fans of the comics will love, we even experience so awesome time travel stuff. If you are not watching this show, you are truly missing out. Take the time to binge it now. Trust me.