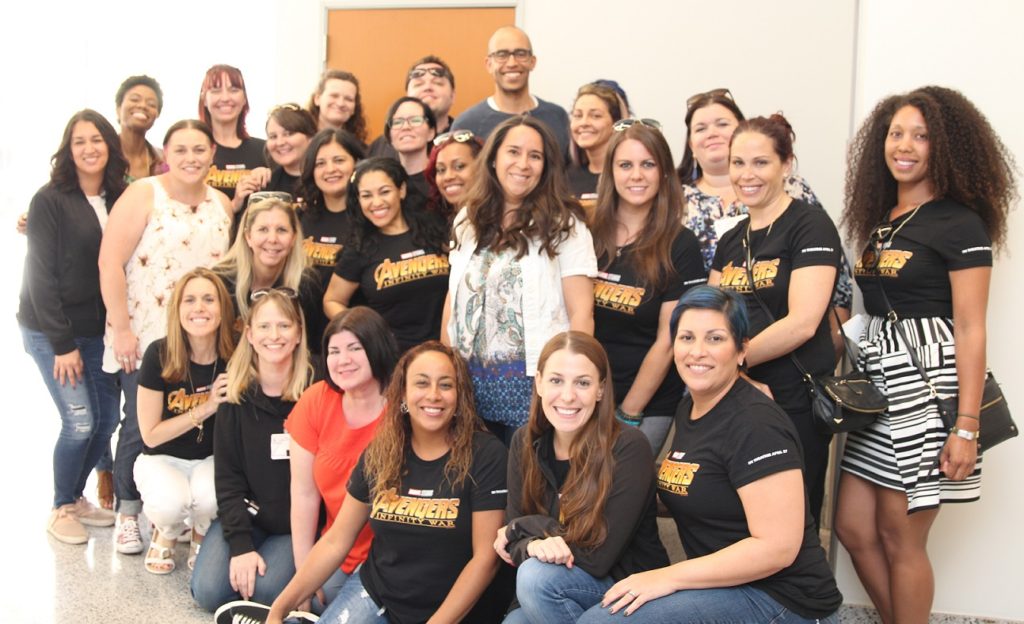 Black Panther is one of the best Marvel movies out there. It broke all kinds of records and I expect to see it clean up when award season hits. As a comic book reader who was never a huge fan of T’Challa in the books, I was blown away by how much I fell in love with the character and his story. When in California for the Avengers: Infinity War Premiere, I was able to sit down with Executive Producer Nate Moore to discuss the Black Panther blu-ray release. We got a sneak peak of the bonus features and learned a lot about the home release process. Pick up Black Panther in stores today! 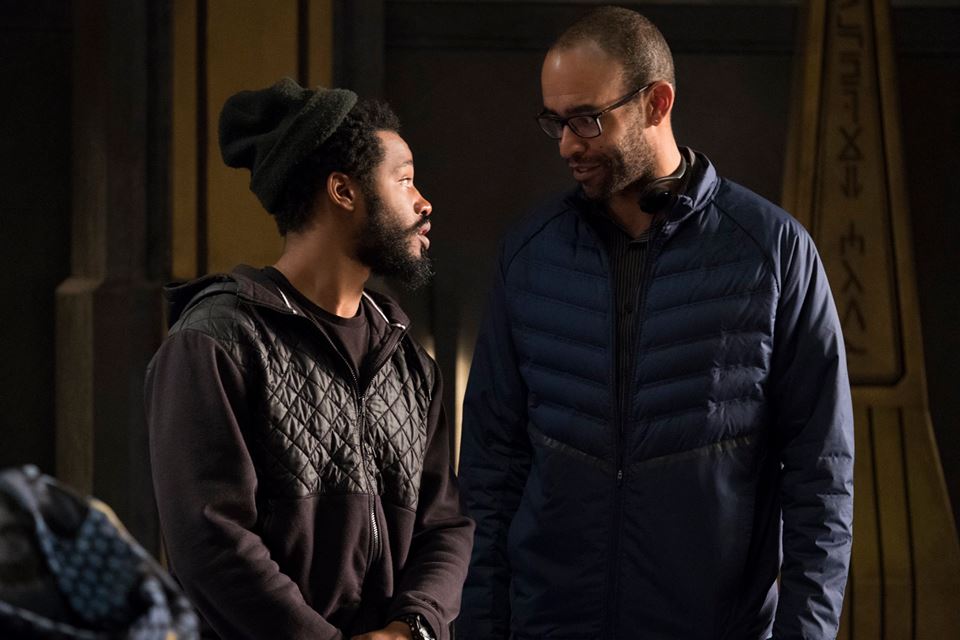 When filming a movie, there are a lot of pieces that go in to it. So many stories to tell and behind the scenes footage being filmed as well. Since bonus features have become a big part of in home releases, we asked Nate how filmmakers decide which stories they want to tell in these features.

“We have a brainstorming session where people get to pitch ideas of what they think is interesting and also what footage we have that we can show. The typical ones like deleted scenes and gag reels, we know we’re going to do so we are collecting that footage all through production and post-production. Then, once we get a sense of what people are responding to out in the world, we can craft our features based on that. This movie just happened to have a lot of really in-depth stuff because the building of Wakanda was so complicated. Unlike other films like Captain America, which I loved and worked on, but that world is a bit more familiar to audiences. So, there’s less to tell. We had a lot of stories to tell from this one.“ 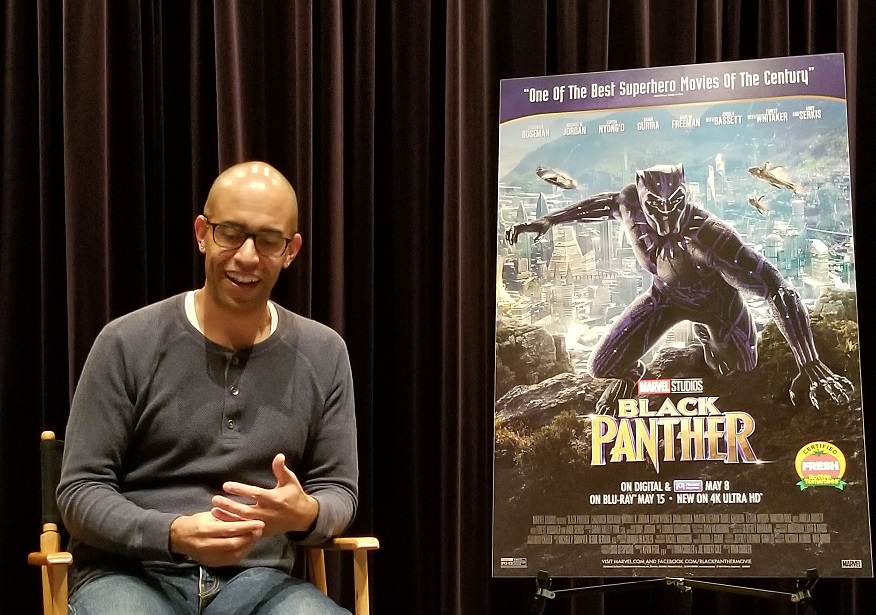 The first bonus features that I always watch are the deleted scenes. I am not really sure why, but they are usually my favorite feature to check out. Perhaps because I really like to see pieces of the story that could have been? We asked Nate Moore about the deleted scenes featured on this blu-ray, and which one he really thought about putting in the film.

“There’s a great scene in the deleted scenes between Okoye and W’Kabi. It’s after Killmonger has taken the throne and it’s their differing points of view as to what side to take. It’s a fantastic scene. Danai and Daniel Kaluuya do a fantastic job in it. We kept it in every cut of the movie through testing because we thought it was so important for people to understand the relationship. And because it seemed so good, frankly. When we pulled it, we found that audiences understood just as well but the pace issue we had for that part of the movie when away. People got really frustrated in waiting for T’Challa to come back. So, the shorter we made that area, the better it played. Even though we loved the scene. Ryan Coogler and I were the last ones fighting to keep it in – ultimately, we couldn’t make a good argument.“

After watching this scene, I agree that it is amazing. I see why it could have been so important, but also understand how it would have slowed things down in the film. I am just glad that I was able to watch it thanks to the bonus features!

Nate Moore told us that one of the features on this blu-ray release, which was being done for the very first time, is a roundtable discussion with the comic book writers and the movie writers. I got probably way too excited about this and was counting the seconds before I could watch it. It totally lived up to my expectations, by the way.

“We did an interesting thing which we’ve never done before – and we might try again – where we did a roundtable with some of the actual writers of the comic. The people who created the character, Don McGregor who did a run in Jungle Action, Christopher Priest who did sort of a seminal run in the ‘90s, and then Ta-Nehisi Coates is doing the run now – with Ryan and Joe Robert Cole who cowrote the movie. To hear what they thought worked and didn’t and things that they found challenging about the character when they were writing, it was sort of interesting to see how through different eras the character was handled and different challenges they faced because of audience expectation and market expectation.“

Nate let us know that he thinks this is something they will continue to do with their in home Marvel releases – and that has this comic book geek SUPER excited! I mean, to see a meeting of the minds like this – wow. Fingers crossed for something like this for Infinity War and Guardians of the Galaxy Volume 3! 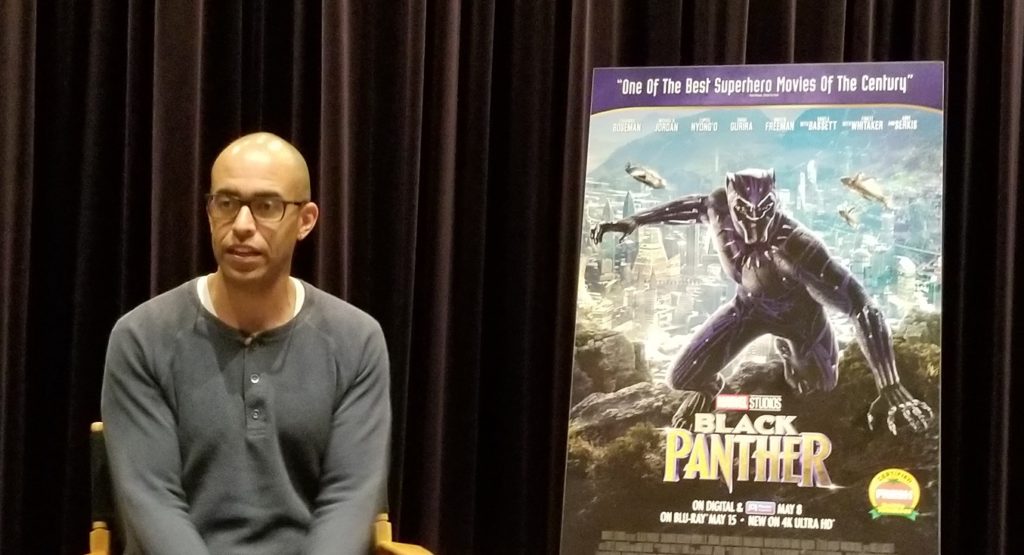 Something most Marvel movies are known for are their Easter Eggs. These hidden details that are a nod to the comic books or other movies, are sought out by all types of fans. Just check YouTube and you will see thousands and videos devoted to pointing out Easter Eggs. We asked Nate about the Easter Eggs in Black Panther, because there didn’t seem to be many. It turns out that was totally intentional.

“When we were building this story, one thing that Kevin [Feige] said very early on was I think there’s enough in this property that we don’t have to have a lot of different intersections because we think it stands alone. That’s also why you don’t see Tony Stark or Steve Rogers – which I think we could have made a case for some of those characters to naturally intersect. But there was so much storytelling and so much detail that we actually were able to keep a lot of that stuff out. And I think it helps the movie just feel like it’s own experience.“

The casting for this film was perfection. I think everyone that has seen it can agree on that. We asked Nate what he thought about how the casting process went – especially for newcomers to the MCU like Michael B. Jordan.

“It was really a combination of three things. We inherited some cast. Chadwick was obviously in Civil War. Andy Serkis had been in Avengers: Age of Ultron. Martin Freeman had been in Civil War. When we hired Ryan, one of the first things he said was I would love to find a role for Michael B Jordan because they had done Fruitvale and Creed together. So, he became Killmonger. Ryan suggested Lupita which was an easy sell. Ryan suggested Danai, which was an easy sell. We collectively went to Angela Bassett thinking there’s no way she’s going to do this movie because man, she’s so fantastic. And she was game. Daniel Kaluuya was a Ryan Coogler idea. Two people we found together – Letitia Wright as Shuri and Winston Duke as M’Baku. We did a pretty wide-ranging casting search for them. M’Baku was great because none of us had really ever encountered Winston before and his size and his presence was just so dynamic – even on tapes in a room reading against nobody, he was fantastic.“ 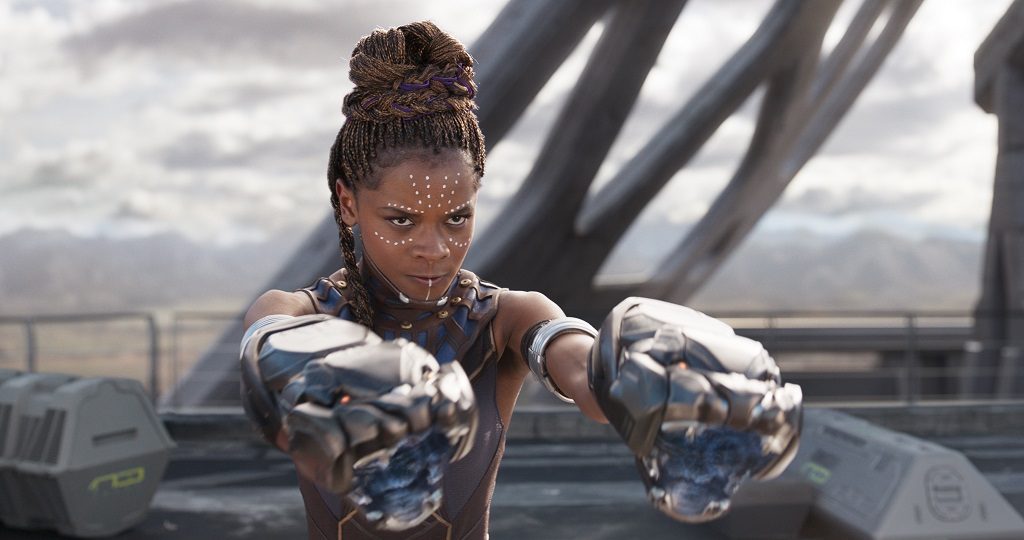 The Casting of Shuri

Nate then continued on about the casting of Shuri in particular. I really found in interesting that she was cast based on her chemistry with Chadwick. I feel like we can really see that come across in the film and that is was a great call on Marvel Studios’ part.

“We ended up doing two rounds with other actresses reading with Chad and it was really about [Letitia’s] chemistry with Chadwick. It was true on that day and it’s still true – Letitia was one of the few people who could actually get Chad to laugh naturally because Chad is a very reserved person. In the audition, it was like oh, that’s his sister. And even on set, she’s one of the few people that he actually relaxes around.“

Of course, I had to bring up the fact that Shuri becomes Black Panther at some point in the comic books. I asked Nate if there are any plans for her to pick up the mantle in the MCU. His response? “It’s definitely a fun possibility. We love that run in the books and she’s such a great character and really popped out of this movie. I think the sky’s the limit. It’s just sort of what is the right time for that story?” Well fingers crossed that we do, because she I love that run in the comics too! 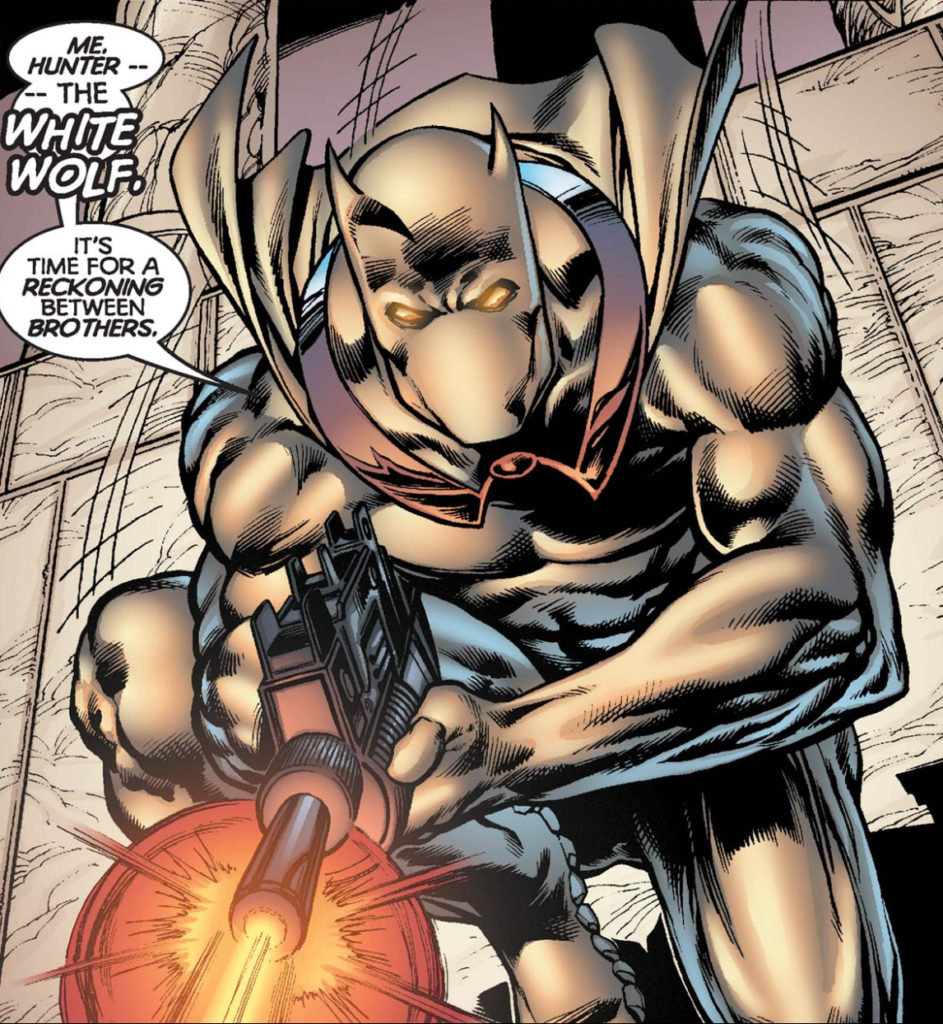 By now we all know about that amazing post credit scene. We asked Nate how it came about, and he explained for us.

“So, the Bucky [scene was]the final scene we shot in additional photography because we realized what was going to happen in Avengers. And we were like oh, we have a great opportunity. We wanted to tell the story of he was frozen – what happened? Is he still programmed? Is he not? Who helped him? Who does he have a relationship with? That was a fun scene because we realized also Bucky very rarely gets to talk to women in our movies for whatever reason. He is always with Cap or shooting people. So, that scene was a lot of fun to shoot and again, Letitia is it so great. So, Sebastian had a good time.“

As we were walking out of the interview, I asked Nate Moore about the “White Wolf” reference in this scene. He told me that yes, of course, it was a nod to the comics – and it certainly could mean more in the future. Something that I found interesting, was that he told me Kevin Feige was against using that reference at first, stating that not many people would get it. Well, this comic book fan was REALLY excited to hear those words – and I think most comic book readers were too!

Black Panther is the highly celebrated story of T’Challa, a young African prince who takes on the mantle of King and Super Hero. It has thrilled and inspired generations of moviegoers around the globe. Now, fans can bring home the phenomenon, packed with light-hearted fun, pulse-pounding action and a powerful message, and watch it over and over again.

I got a special delivery from Wakanda this week! The Black Panther blu-ray doesn't hit stores until May 15th, but I have it in my hands now! You can, however, watch it in digital now. I promise you that every single bonus feature is worth watching, especially the roundtable with the comic book writers (this comic collector soaked in every word!). Stay tuned to MamasGeeky.com because I have an exclusive interview with Executive Producer Nate Moore coming next week for the release! . . . . . . #BlackPanther #Marvel #Wakanda #WakandaForever #BlackPantherBluray #InfinityWarEvent #MarvelComics #ComicBooks #MarvelComicBooks #MarvelStudios #MCU #Avengers #MamasGeeky

Not only did I receive a copy of Black Panther on blu-ray early so that I could check out the bonus features, I got to watch three of those features in California. They were all amazing, I promise you that. I am a huge fan of bonus features – I think they really help to tell the complete story, plus, add in some fun. We saw Crowning of a New King, The Warriors Within, and The Hidden Kingdom Revealed. However, there are tons of other bonus features, and each of them are equally amazing.

Enter to win a copy of Black Panther on blu-ray using the Gleam form below. Be sure to check out my other giveaways while you are here and GOOD LUCK!