This experience was all thanks to Marvel Studios and Disney, but the opinions are 100% my own.

While in LA for the Thor: Ragnarok premiere, we were lucky enough to interview some of the cast and filmmakers. The day of our interviews we were surprised with an addition to that list, Kevin Feige. I was over the moon excited because he is the President of Marvel Studios and a brilliant man! I previously interviewed Kevin a few months ago at the Guardians of the Galaxy Volume 2 press event along with James Gunn. That still remains one of my most favorite interviews ever so I was eager to talk with him again.

THAT Line From Spider-Man: Homecoming

Let’s get this over with. While it wasn’t the first question we asked, it is the first one I want to talk about. If you saw Spider-Man: Homecoming than you know there was a line about bloggers in it. Tony Stark says “Behind this door are a bunch of journalists. Real ones – not bloggers.“. This caused a bit of an uproar in the blogging community – especially since we work really hard to promote their movies. If I am being totally honest, I got over it real quick. Don’t get me wrong, it upset me. But I felt like I had connected a bit with Kevin and I knew that he would not put that line in the movie maliciously. I wanted to give him a chance to set the record straight so I asked him if he had any comment on it.

Kevin’s response really made me happy that I asked. “That was an ad lib – a comedic ad lib – from Mr. Downey. One of the many things he just says. Moments before that, he says something about a human dog hybrid and puppies and who knows what he’s talking about – it’s just funny. When we shot it, it just sort of went past me. We cut it together and only in the early screenings I went, oh I’m gonna hear about this. It was just him being funny.” It makes me feel better knowing that he realized it might not go over well – even though it was intended as comedy. After the interview, he even asked me if I was offended. I truly think Kevin loves and appreciates us bloggers, and did not mean any harm by approving that line.

An Exciting Time For Marvel

When Kevin first walked in the room, we asked him how it feels having Guardians of the Galaxy Vol. 2 and Thor: Ragnarok coming out in the same year. He said that it was pretty awesome, and he loves “that littler Peter Parker in high school is in the middle of all that.” As a total Marvel Fan Girl, this has been a dream year for me as well – and there are so many amazing things to come with Black Panther, Avengers: Infinity War, Ant-Man and The Wasp, etc. Kevin then elaborated saying “It’s pretty cool and it indicates what I’ve always wanted people to understand – that just because something’s based on a comic doesn’t mean they’re all the same. [It] doesn’t mean they all inhabit the same exact tonal world.” 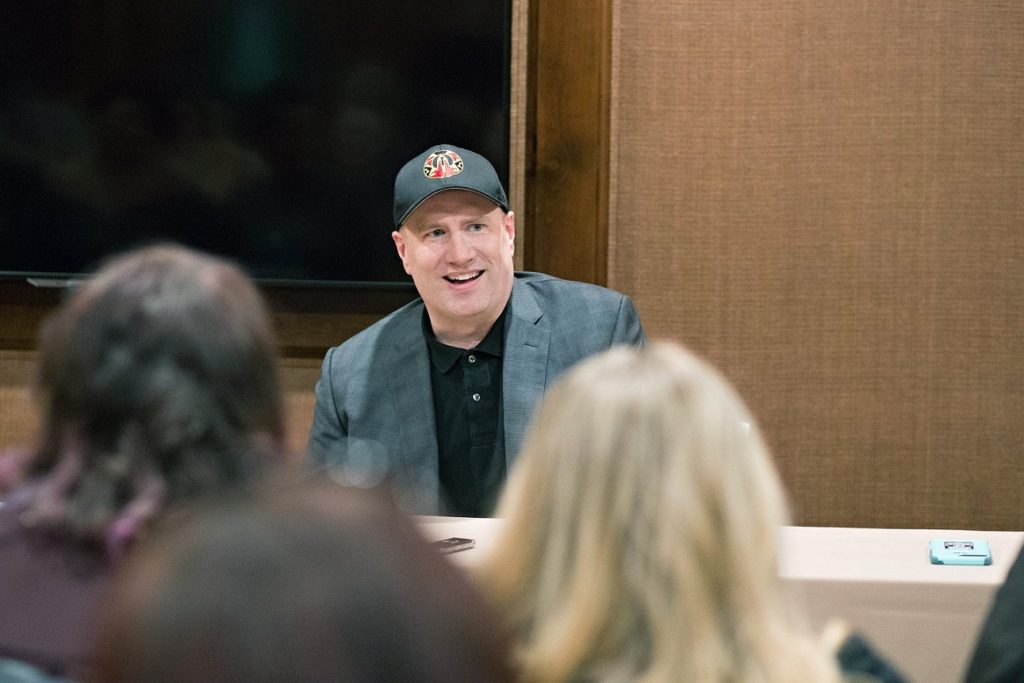 The release of Avengers: Infinity War is coming up quick (someone pinch me!), and so we asked Kevin a little bit about that. “Infinity War is a pretty major meeting of the minds – Thor, in particular, with the Guardians. We’ve already shot some very fun scenes between them. The cosmic adventurers spend a lot of time together in that movie.” Eeek! When I heard that I started doing a dance on the inside. You guys all know how I feel about the Guardians, and I cannot wait to see them meet up with Thor! We, of course, asked about the Infinity War trailer and got told “Someday.” Sigh, at least we know it has to come out before May.

A Different Look For Thor

The look and feel of this Thor is much different than the first two. I love them all, but this one is hands down my favorite. We asked Kevin why there was such a difference in this one. “That was our idea perfected and improved by Taika [Waititi]. We wanted to, as we always do in our movies, go to a new place, to an unexpected place. Look at what we did with Shane Black’s Iron Man 3 [and]the third Captain American film. We always look at a third film, Infinity War in the case of Avengers coming up, as an opportunity to take the fans to a totally unexpected [and]fun place.”

He also added that Chris Hemsworth “used to say, Captain America has got Iron Man in his movie, who am I getting? The fun thing about Thor is he’s got amazing characters in his own comics – Hela and Valkyrie. Thinking about who else we could bring in from the universe, very quickly we realized Hulk would be that guy. Seeing Thor and Hulk battle it out together is great. Seeing Banner and Thor being fish out of water is even better. Suddenly, you have this great dynamic between them – so we decided well, I guess. When we last saw [Hulk he was] on a quinjet heading up into the atmosphere. He kept going and he got caught in a worm hole and he ended up on Sakaar.”

Since Kevin is the President of Marvel Studios, he can’t pick favorites. But we asked him to anyways. His response, “I really don’t have a favorite. We’ve been so lucky that with each release, another one rises to the top. I read comments that now Thor is going to become people’s favorite Avenger after this movie. I love the I’m Mary Poppins shirt and what we did for Yondu and what James [Gunn] did for Yondu. Yondu on the arm over there (Yup, he looked over at me and pointed to my tattoo. Of course I had to include this quote!). The truth is, no, I don’t have a favorite.”

Myself with Kevin Feige at the Thor: Ragnarok LA premiere

He then added, “As we approach our ten year anniversary, it’s impossible not to look back on Iron Man one and what [Jon] Favreau did, and what Downey did, and continues to do, that really is the foundation for everything we’ve done. So that experience of Iron Man one was our first, so, in many ways, its the one I look back at quite fondly. But I don’t have favorites.”

Finding Balance in the MCU

With so many amazing Marvel movies coming out, I can’t help but wonder how Kevin Feige keeps them all going. Well, he is not only a brilliant man – he hires them! He let us know hoe he balances it all by giving props to his Directors and team. “You hire Taika Waititi, you hire James Gunn, you hire John & Anthony Russo. I’ve got a incredible team at Marvel Studios and each film has a single embedded Executive Producer on it. Brad Winterbaum on [Thor: Ragnarok]. [He] has lived with Taika for the past two and a half years. Moved his family to Australia for months and months. They’re on it the whole time, so I’m always a text or a phone call away of knowing exactly what’s happening anywhere at any given time. So it’s a great privilege to have this team in place. Most of us have been together for almost the entire ten years at the studio, which is very unusual in Hollywood. It’s great.” 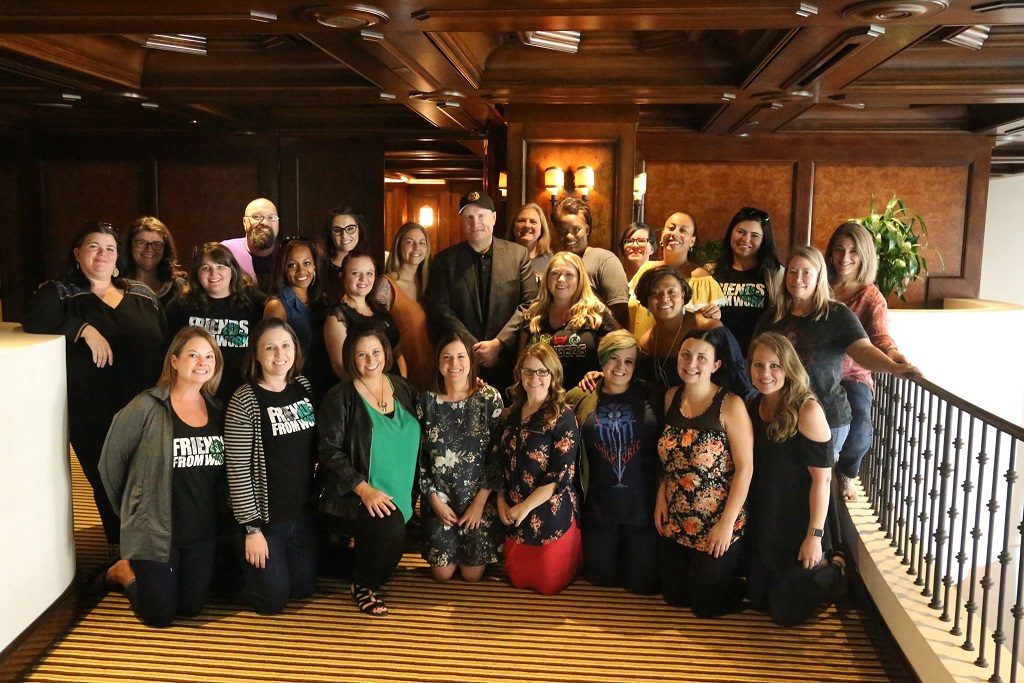 Many of the Avengers have their own movies, but we don’t have one for Mark Ruffalo as Hulk. We asked Kevin if we would see one in the future – perhaps with the other Hulks such as Red Hulk and She-Hulk. Kevin responded, “We love them all. We think it would be fun to bring them to the screen. How we do that, I’m not sure. In terms of stand-alone Hulk movies, there are various contracts with studios that have to be worked out. I’m just so happy that we have the ability to include Hulk in these ensembles and what we already have planned. [Like the arc we start in Ragnarok] – an enhanced push and pull between Hulk and Bruce Banner for their body continues in the next Avengers film.”

In Marvel Studios’ THOR: RAGNAROK, Thor is imprisoned on the other side of the universe without his mighty hammer and finds himself in a race against time to get back to Asgard to stop Ragnarok – the destruction of his homeworld and the end of Asgardian civilization – at the hands of an all-powerful new threat, the ruthless Hela. But first he must survive a deadly gladiatorial contest that pits him against his former ally and fellow Avenger – the Incredible Hulk!