WARNING: THIS ARTICLE IS FILLED WITH ANT-MAN AND THE WASP SPOILERS! If you have not seen it and do not want any spoilers, please come back after you have seen the movie. Now that Ant-Man and The Wasp has been out for a week, let’s discuss it. This movie was brilliant, if you ask me. Filled with humor, exactly what I would want in an Ant-Man movie. But honestly, the girls take center stage in this one and kick some serious butt. And then, well, read on to see how Marvel built me back up after Infinity War with much needed humor, only to rip out a tiny piece of my soul during the mid-credit scene.

If Paul Rudd and Michael Pena can’t make you laugh, then something is wrong with you. This movie was hilarious from start to (almost) finish. Luis steals the show – that truth serum part! – I crack up just thinking about it. Stan Lee, of course, had a great cameo as always. Michael Douglas had some great dry humor and I just loved him going after Scott in this one. I mean, he was really upset with him over his actions in Civil War, as he should be, and it showed.

The Quantum Realm Was Beautiful

One of my favorite parts of Ant-Man and The Wasp was how beautiful the Quantum Realm was. Hank even says it himself when he is down there. The imagery was out of this world and I loved looking around the screen during those scenes. The colors and shapes and little creatures – just fantastic.

OK, OK, I know she WAS the villain in this film, but didn’t you feel sorry for her? At least just a little bit? I loved her backstory and it really made me feel bad for her. Something that Marvel tends to do with their villains. They are really never cut and dry are they? I tend to relate to them or feel bad for them, at least a little bit. Even Thanos.

I adored all the father/daughter themes that you see in Ant-Man and The Wasp. Right from the beginning too with Scott and Cassie when we see them working together to “steal” the trophy. I admit, both times watching this movie I got chills and teared up at this part. All I could picture was my husband and my daughters doing this. I also really loved hos Hank and Hope’s relationship has progressed. They seem much closer, and Evangeline Lilly herself even said she was looking forward to working closer with Michael Douglas in this one.

Of course we also have Ava and Bill – he was obviously a father figure to her, taking care of her after she lost her real father (who was Egghead, well Elihas Starr, by the way – just a nod to the comics or something to know for the future?). At one point, Ava wanted to take Cassie and potentially hurt her to get to Scott. Bill talked her down from this, which I totally loved. Something a father really would do. In the end, he forgave her for all the bad she had done, and told her he would not leave her. Awwww….

And then Marvel “picked my scab”. My wounds from Avengers: Infinity War were beginning to heal through all the laughs and fun I was having during this movie. Cue mid-credit scene. My thoughts were as follows: Scott is going back in the Quantum Realm to help Ghost. I am so glad they are friends now. How nice. Oh that was fast, he collected everything he needed. Wait why aren’t they responding. Are they joking. Wait, did one of them disappear from the snap. Wait WHAT THE ACTUAL F*CK, all three did!?!? Now Scott is stuck in the Quantum Realm? Who will save him? Why was I so invested in Janet getting back and now she is gone. What a waste. WHAT IS GOING ON! WHY MARVEL WHY!

"It seemed to work for us tonally, and allows us to do our very stand alone movie but then have it fit into the larger Marvel happenings." – @MrPeytonReed on #AntManAndTheWasp mid-credit scene

Sitting in the theater watching the movie for the second time, things were a little different. As soon as the movie ended I looked around and, like me, everyone was having a good time. Chatting and laughing. I couldn’t help but think these poor souls don’t know they are about to be destroyed. In my head I just heard “Poor Unfortunate Souls” over and over. My heart was pounding knowing I was going to have to watch that again. I tried very hard to not give anything away to my husband or friends that were sitting with me. When it happened, I immediately got yelled at. ALL THREE?!?! They said… ugh. Yes, all three. 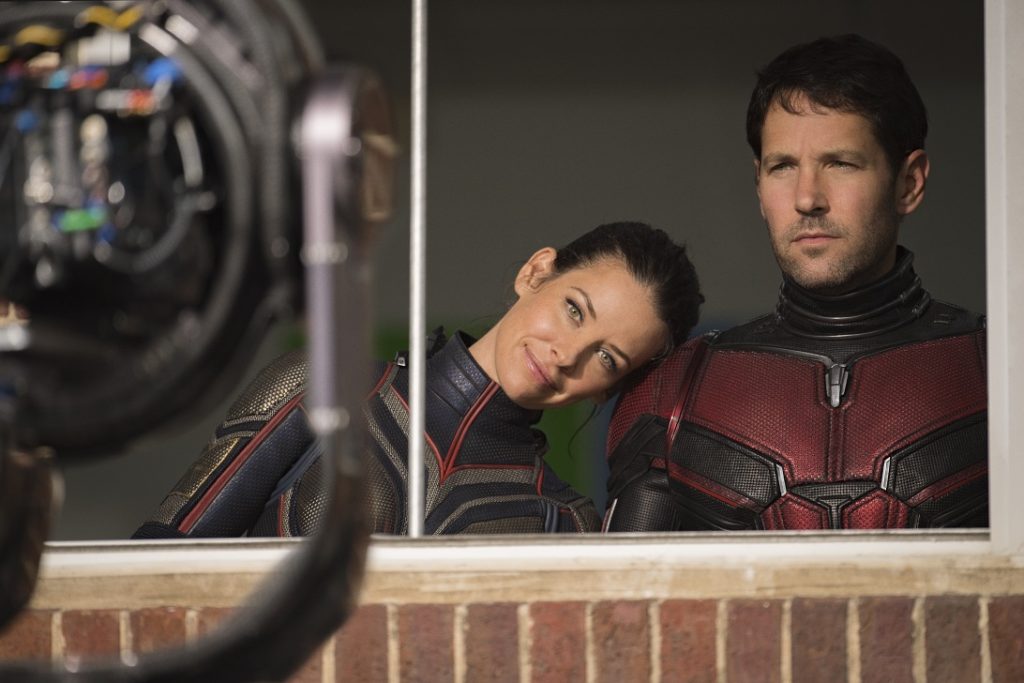 ABOUT ANT-MAN AND THE WASP

Scott Lang is grappling with the consequences of his choices as both a superhero and a father. Approached by Hope van Dyne and Dr. Hank Pym, Lang must once again don the Ant-Man suit and fight alongside the Wasp. The urgent mission soon leads to secret revelations from the past as the dynamic duo finds itself in an epic battle against a powerful new enemy.

Ant-Man and The Wasp is in theaters now!