Just like Anna, Elsa, Kristoff, and Sven, our family loves to game too! Here are some tips to throw the BEST Family Game Night!

My family saw Frozen 2 opening weekend and we absolutely loved it! All of us have been waiting for the home release and it is finally here. In order to celebrate we knew we needed to do something special. Just sitting down and watching the movie wasn’t going to cut it — so we took it to the next level.

A movie and game night was the perfect way to honor one of our favorite movies. After all, we know from the film that the sisters love a good game night! So why not take after them? Luckily there are tons of Frozen 2 themed games — and the home release of the movie has some fun bonus features we were eager to take advantage of!

What You Need For A Frozen 2 Movie & Game Night

One of my favorite scenes in Frozen 2 is when Anna, Elsa, Kristoff, and Olaf are playing games together. My family loves a good game night, just like them. And now you can throw your very own Frozen 2 game night as well!

Did you know that so many of your favorite games are now Frozen 2 themed? Just check these out!

Don’t forget the Frozen 2 themed plates and napkins and of course, the popcorn!

Sing-Along With Your Favorite Frozen 2 Characters

Of course you can really dial up the fun with a copy of the Frozen 2 Blu-ray (an absolute must) and a Frozen 2 karaoke machine! Belt out all your favorite tunes — which is made a whole lot easier with the sing-along version of the movie. It is one of the bonus features on the Blu-ray and digital and something you don’t want to miss out on.

Take turns singing along with your favorite Frozen 2 characters (you know I will be singing Into the Woods with Kristoff over and over…). My daughters were so excited to get their very own karaoke machine so they could sing along. In fact, they have been doing it all day today!

Did you miss my Frozen 2 review? 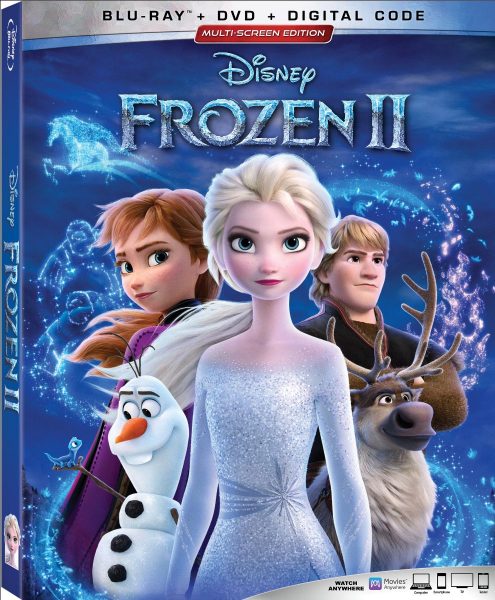 Who doesn’t love bonus features? I know that I do! My favorite thing about a home release is checking out behind the scenes footage, deleted scenes, and bloopers. The Frozen 2 Blu-ray Combo Pack bonus features are a ton of fun — and something your whole family can enjoy during their game night!

Check out these Frozen 2 quotes that really stuck with me.

Why was Elsa born with magical powers? What truths about the past await Elsa as she ventures into the unknown to the enchanted forests and dark seas beyond Arendelle? The answers are calling her but also threatening her kingdom.

Together with Anna, Kristoff, Olaf and Sven, she’ll face a dangerous but remarkable journey. In “Frozen,” Elsa feared her powers were too much for the world. In “Frozen 2,” she must hope they are enough.

I loved Kristoff and Sven song. Too funny

Frozen has such wonderful characters. My favorite is Elsa! I'm excited to see the new characters in Frozen 2!

I would love to win this for my daughter!! She loves Frozen and it has definitely grown on me. It came out the year she was born!

So excited to watch it again. Saw it in theaters and definitely worth it.

The voice cast in this movie is so incredible! The animation looks beautiful too!