Journey To Space has been so popular at IMAX theaters and science centers all over the country that Shout Factory has decided to release it on Blu-ray. Narrated by Sir Patrick Stewart (Star Trek), Journey to Space offers spectacular space footage and gorgeous views of Earth. This dazzling film shows the magnificent contributions made by daring space pioneers, and illustrates how exciting and ambitious NASA’s next era promises to be, including space travel to Mars and capturing asteroids. My oldest daughter is really in to space and my husband and I were really excited to share this film with her. She immediately took to it – and keep in mind, she is just (almost) 5 years old. We have watched it several times already and she has now decided that she wants to be an astronaut when she grows up.

My husband is an engineer and works in the nuclear field so STEM is really important to him. We are constantly bringing math in to every day situations – and we even do science experiments with our daughters on a weekly basis. Our family activities usually consist of creating volcanoes and building robots – totally normal, right? Here are some really fun experiments that you can do with your little ones (my girls loved them all!): 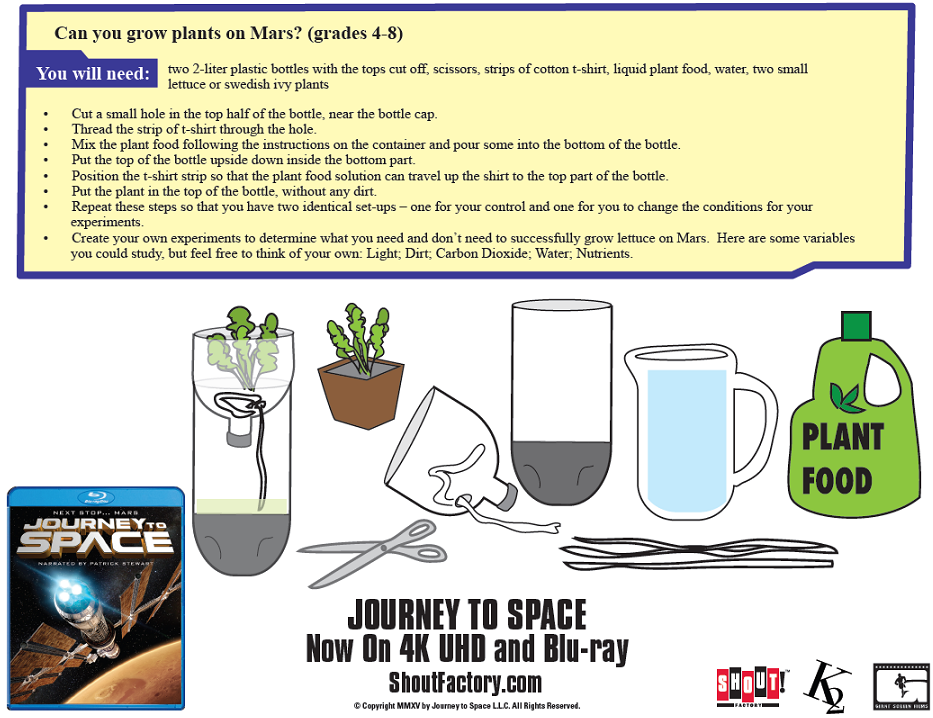 Synopsis
Brilliantly narrated by film and television legend Sir Patrick Stewart, Journey To Space gives a sweeping overview of humanity’s accomplishments in space, as well as our ongoing activities and future plans. Journey To Space puts into historical context the magnificent contributions made by the Space Shuttle program and its intrepid space pioneers. It uses the most spectacular space footage – including unique views of Earth and operations in space – such as deploying and repairing the Hubble Space Telescope. It then goes on to show how the shuttle launched and assembled the International Space Station (ISS). Together, these programs have taught us how to live, build and conduct scientific experiments in space. The ISS will continue operating in space until 2024, and the film shows how it is building a foundation for the next giant leaps into space, concluding with a fascinating, realistic scenario of how astronauts will actually get to Mars, live there for long durations, and then return home after a two-and-a-half-year mission. Purchase here.

Enter to win a copy of Journey to Space on Blu-ray using the Gleam form below. There will be THREE (3) lucky winners! While you are here, be sure to check out my other giveaways and GOOD LUCK!