On The Rocks is painfully slow with no payoff in the end. Viewers will find it hard to connect to, or even care about, the characters.

On The Rocks is a movie that really disappointed me. I was excited to watch it, especially with an all star cast like it has. With two fantastic comedians as the lead roles, I expected to laugh more. Heck, I expected to laugh. Honestly, I did not laugh once while watching On The Rocks. What I did do was check my watch. A lot. This movie is slower than slow. For something that is only an hour and a half long, I was completely surprised that it felt like triple the length.

Since the description of On The Rocks call sit a comedy, I was hoping for some humor. It isn’t even like the jokes fell flat for me, because I cannot even pick out the parts that were supposed to make viewers laugh. If there were jokes, they weren’t obvious at all.

On The Rocks is about a woman, played by Rashida Jones, who thinks that her husband might be cheating on her with a coworker. She explains her problem to her father, played by Bill Murray, who suggests they team up and follow her husband to get to the truth.

While they are out and about around town together, her father does a lot of explaining about how it is hard for men to stay with one woman. This involves discussing women’s breasts and haunches and honestly, it felt kind of gross. If my dad ever tried to say some of those things to me I would be super uncomfortable. Honestly, I was uncomfortable watching Bill Murray do it! 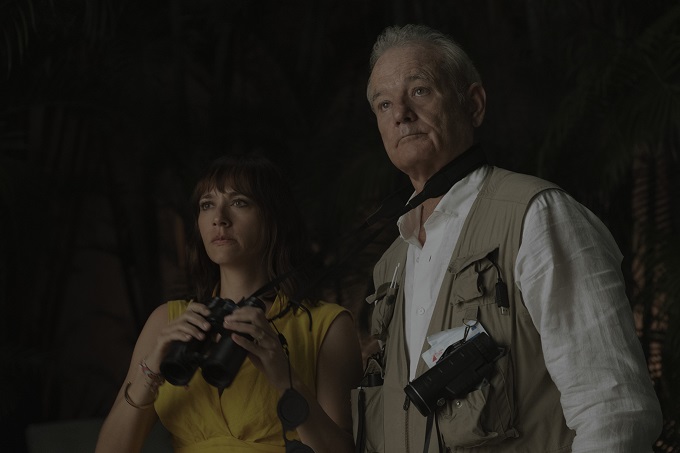 Why It Didn’t Work For Me

Besides the fact that the comedy in On The Rocks was non-existent, there are several other reasons why this one is a big skip for me. Sure, the cast is fantastic, but it was so hard to connect to them. Rashida’s character, Laura, is potentially losing her husband and honestly, I just didn’t care. I did not feel connected to her, or her relationship, at all. The movie never set up them having having a deep love for me, so why should I care? When it started they were already pretty much going through a slump.

I also didn’t care about Marlon Wayans’ character, Dean. Was he cheating on his wife? Who knows. And who cares. It didn’t seem to me like he was making any sort of effort and that didn’t bother me. I mentioned this a little bit earlier but Bill Murray’s character, Felix, is supposed to be a play boy and I get that. But he came off almost a little too much like a pervert to me. The things he said to his daughter were a bit too much. Maybe they have a relationship like that but still, I didn’t believe it.

Usually I adore Jenny Slate but her character was not only annoying, she seemed pointless. I never really understood why she was there besides to talk Laura’s ear off about the men she is dating at school pickup. With Laura and Felix driving around town tailing Dean, there was a lot of opportunity for fun and silly adventures. But all we got was slow and boring outings.

I really wanted to like On The Rocks. In fact, I was excited to watch it. Sofia Coppola’s style is slow and dry, I do get that, but this was just not at all what I was expecting. The synopsis makes it sound like it is going to be funny and there was not one bit of humor. And yes, I know that Bill Murray is known for dry humor — and I love his dry humor. But this wasn’t that.

The story overall is slow and boring, with no ability to connect to any of the characters. When we finally get an answer to the question that has been built up for over an hour, it is stuck in the last ten minutes of the movie and honestly, I didn’t care anymore.

On The Rocks had the potential to be a great movie with a great cast — instead it drags on and there is never a payoff worth wasting the ninety minutes of your life watching it. It feels like the entire cast was wasted, which is a bummer. Skip this one, trust me.

About On The Rocks

The story of a young mother who reconnects with her larger-than-life playboy father on an adventure through New York. In this comedy about aging, marriage, and the tenuous bond between parents and grown children, New York author and married mother-of-two Laura has become suspicious that her career-driven husband may be having an affair with a coworker, a speculation encouraged by her caddish, bon vivant father.

On The Rocks comes to AppleTV+ on October 23rd.