The live action Mulan is extremely different from the original animated film — and that is OK. It is a magical and powerful story, and it does the classic proud.

The re-imagined version of Mulan is just that — re-imagined. While it pulls things from the classic animated film, it focuses on the true legend of Mulan, and I am thankful for that. This movie is not only visually stunning and pure magic, it is absolutely inspiring. I have two young daughters and Mulan helped them discover that girls can be warriors too. Mulan 2020 is an inspiring tale — told in an amazing new way.

I love a good action movie and Mulan brought the action more than I expected. Sure, there is violence which should be expected as it is a war film, but wow the battles were beautiful. Don’t worry, it isn’t too much for young kids. There is no blood or gore — just amazing battle scenes. The choreography is simply incredible, like a perfectly timed dance.

In this version, Mulan’s chi is strong, and that helps her on the battle field. She has gone her whole life being told to hide her chi away because she is a girl, but boys are allowed to embrace their chi. Once she unleashes it, she is unstoppable. Sometimes I felt like she was right out of the Matrix with her moves. The cinematography was fantastic, and I loved the twists and turns of the screen as she climbed walls and flipped through the air. Not to mention the backgrounds of every single scene were just gorgeous. There is no other way to describe them. Purely stunning. 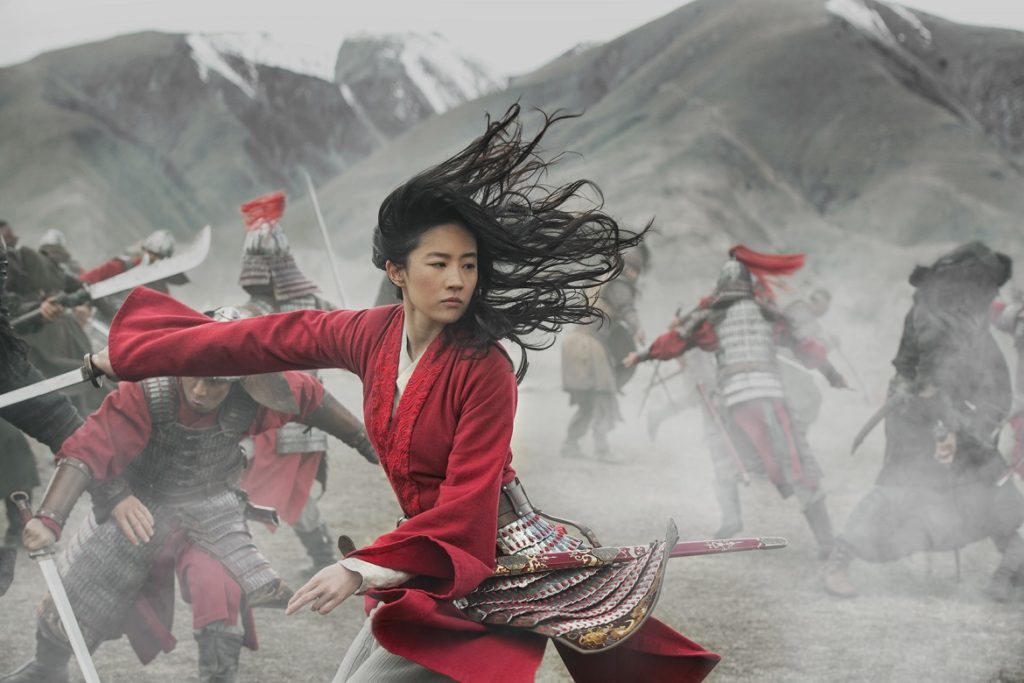 Mulan shows girls everywhere that they can be warriors too. Yes, that was the message of the animated version, but it just feels more powerful in this live action one. To me anyways. There IS such a thing as a princess warrior — and Mulan is it. She is strong, powerful, and would do anything for her family. Yifei Liu made Mulan her own, and didn’t just copy Ming-Na Wen’s version, which I appreciated. It allows the two to be separated, as they should be.

It is inspiring in so many ways, and is something all young girls should watch. Several moments gave me actual chills. As in, I had goosebumps. They were just THAT powerful. It has taught my daughter to never allow a man, or society, to tell you to hide what makes you special.

Differences From The Animated Version

There are quite a few differences in the live action Mulan and the animated classic, which is perfectly OK. Welcomed even. One of the reasons I wasn’t such a big fan of The Lion King live action movie is because it was so similar to the original film and felt like we didn’t need it. The live action Mulan is a movie we didn’t know we needed. This story needed to be told.

As you probably know Mulan has no songs. There is also no Mushu (and as much as I love him in the classic, I didn’t even think about him once while watching this version). We do get a Phoenix, that doesn’t talk, who shows up at the most perfect times. One of which brought tears to my eyes.

We also get a brand new character, Xianniang, who you see as the shape-shifting witch in the trailers. While I don’t want to give away any spoilers, I will say that I absolutely loved her (I do love a good villain) and her story arch gave me everything I wanted from her character. And yes, I know you guys have been waiting for this, she made me cry.

There is also no love story in Mulan, not really anyways. Mulan focuses on — Mulan — just as it should. That is part of what makes this movie so great. Don’t get me wrong, I love a good love story, and there are hints of one there. But it is not a major focus, which I appreciated.

Mulan is inspiring, stunning, magical, and most definitely NOT the original animated classic. Is it better? Well, that is hard to say. Different is the best word to describe them. Both are amazing in their own ways, and both will, most likely, make you cry.

They will also make you laugh, so don’t worry about that. There IS humor in this version of Mulan. Cricket and Yao provide a lot of comic relief, that are some of my favorite scenes in the film. Sure, we are missing Mushu, but you know what? We don’t need him. I wouldn’t exactly say he is replaced by a phoenix, but Mulan has a phoenix as a guardian and it shows up at the perfect moments.

There are melodies of the music that we all love from the animated classic played during key scenes that are sure to stir up some emotions inside you. It is all the song we need. You just cannot compare the two. They need to each be appreciated for what they are.

The live action re-imagining of Mulan is also all about girl power. Not just Mulan, Xianniang too. Girls are told to hide their chi away, and if they embrace it, they are a witch. There is no place for a powerful woman in this world — until Mulan proves herself, that is. I love this message and the fact that my young daughters understood it, and realized they can embrace their “chi” and what makes them strong. Dedication to family is a big part of this movie as well, so yea, cue the tears again.

Overall, Mulan is a must see movie for fans of the original. And for those that haven’t seen it. And for those who didn’t like it. This version is almost completely different, in the best ways possible. Sure the roots are still there, but it is it’s own movie. So no matter how you feel about the original, this version deserves to be watched.

Brave. Loyal. True. Mulan is all of these things, and more.

Wow. Just wow. Disney's Mulan is not only visually stunning, it is absolutely magical. I laughed, I cried, and I loved every second of it. I cannot wait to take my girls to see it. Talk about girl power. WOW. #Mulan

P.S. Without giving anything away — there was a cameo moment that made my heart sing
(and the whole theater cheer).

Check out these unforgettable Mulan quotes!

Acclaimed filmmaker Niki Caro brings the epic tale of China’s legendary warrior to life in Disney’s “Mulan,” in which a fearless young woman risks everything out of love for her family and her country to become one of the greatest warriors China has ever known.

When the Emperor of China issues a decree that one man per family must serve in the Imperial Army to defend the country from Northern invaders, Hua Mulan, the eldest daughter of an honored warrior, steps in to take the place of her ailing father.

Masquerading as a man, Hua Jun, she is tested every step of the way and must harness her inner-strength and embrace her true potential. It is an epic journey that will transform her into an honored warrior and earn her the respect of a grateful nation…and a proud father.

[…] another perspective on the movie, check out my friend Tessa’s review!  She was at the actual premiere back in March […]