The first three episodes of Raised By Wolves have hit HBO Max, and have me very intrigued for the rest of the season. 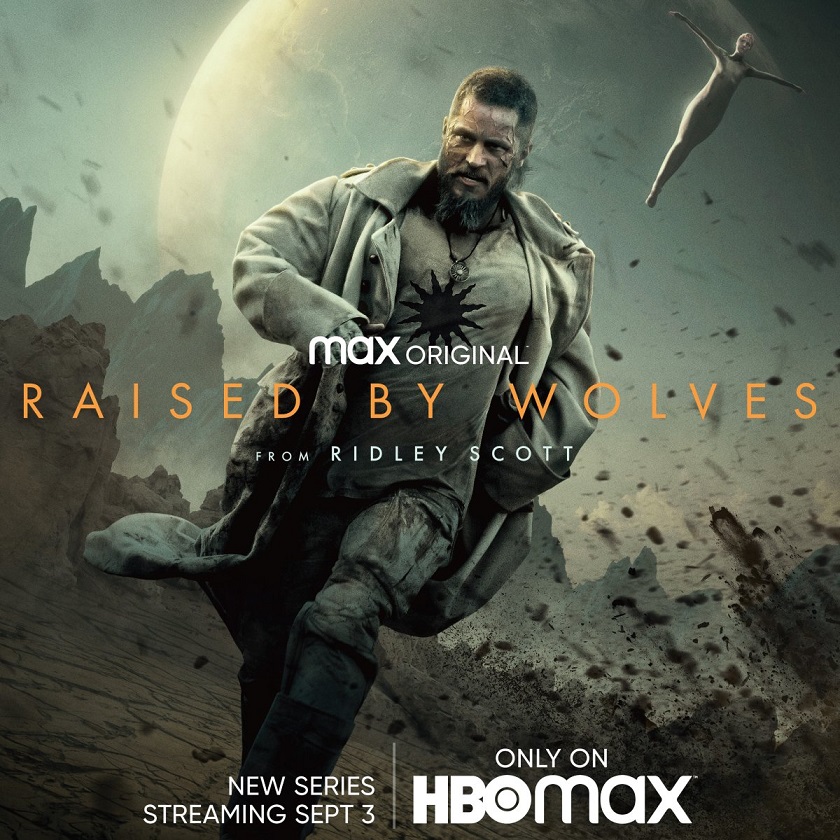 While not every Sci-Fi show hits the mark for me, a lot of them do. It is one of my favorite genres and when you mix in future and post-apocalyptic type plots, I am totally here for it. That is why the trailer for Raised By Wolves intrigued me so much. As I write this review, I need to let you know this is only for the first episode. I have not watched any further at this time, and it is based on my initial reactions for Raised By Wolves season one, episode one.

Warning: Minor Spoilers Ahead for
Raised By Wolves Season One, Episode One.

The premise of Raised By Wolves is that there has been a war and Earth is destroyed. The war was over religion — seems pretty realistic, doesn’t it? The androids Mother and Father were sent by Atheists to another planet to birth and raise human children. They are told not to raise them to believe in religion because, well, that was their original downfall.

Mother and Father raise these kids but unfortunately, there are accidents and sicknesses and only one survives. The main story seems to take place when this child is twelve years old. Mother and Father are both starting to malfunction — Mother more so. She is becoming dangerous, and is afraid that the one remaining child is going to start believing in God and religion.

Father realizes that Mother is becoming more violent and attempts to contact humans. Even though they do not have the same beliefs, he feels that the human child will be in better hands with Mother who is going off the deep end. And he isn’t wrong.

What happens next brings too major of spoilers for me to tell you, but let’s just say it is clear there is going to be a lot of focus on the Mother the rest of the season. The first episode moves along at a decent pace to bring viewers up to speed with the world it takes place in. Add that to the blood and gore, and you have yourself an intriguing premiere.

If you have followed me for a while, you know that I love blood and gore when used well, and boy does Raised By Wolves do this. There is one moment in this episode that stand out in particular. Mother uses a scream to literally explode some human bodies. And it is pretty darn amazing. There is blood floating in the air and she gets covered by it. I love that scene, which we do see in the trailer. But seeing the full version of it was pretty amazing.

When this episode ended I really, really wanted to hit play on the second episode, but I had commitments that stopped me from doing so. Having thought about it for most of the day, I decided to write this review of the first episode, before getting into a more detailed one about the rest of the season in the future.

If Raised By Wolves continues with the excitement, I just might love this series. Admittedly, I am pretty hooked just off the first episode, and have been avoiding reviews. A show like this can easily fall apart as it tries to introduce more characters and plot points, and I truly hope that does not happen. I also have my fingers crossed that the pacing doesn’t slow down. I guess I will find out soon enough.

About Raised By Wolves

After Earth is torn apart by religious differences and the human race teeters on the edge of extinction, an atheistic android architect sends two of his creations, Mother and Father, to start a peaceful, godless colony on the planet Kepler-22b.

Raised by Wolves follows Mother and Father as they attempt to raise human children in this mysterious virgin land, a treacherous and difficult task that’s jeopardized by the arrival of the Mithraic, a deeply devout religious order of surviving humans.

As the androids make contact with this zealous and dangerous people, they struggle to control the beliefs of their fiercely self-determining children.

The first three episodes of Raised By Wolves are now streaming on HBO Max!