My list of Toy Story 4 emotional moments is in no particular order. I tried to arrange them by the order in which they happened in the film, not by how emotional they made me.

When Andy Gives Up Woody

Toward the beginning of the film, and somewhere in the middle(ish), Toy Story 4 breaks out the big guns. Showing Andy and Woody playing together – and the moment when Andy gives up Woody. They do this to kind of to catch you up, and help you remember how the last one ended (like we could ever forget). Yea, I couldn’t handle living through that again, and it is when the waterworks started.

We finally find out what happened to Bo! Part of me was super excited to know the full story. Just why did she leave? How did it happen? Was Woody there to say goodbye? The fact that Bo asked Woody to go with her, and he almost did – is what really got to me. Had Andy not come running out of the house looking for him, we might never have had a Toy Story 3, or 4.

It was that moment that I realized Woody had been regretting that decision for a while now. He knew his place was with Bo Peep. As Tom Hanks pointed out in our interview, Woody knew since the moment he met Bo that she was the toy for him.

Woody Being Left in the Closet

My heart broke for Woody when he realized he is not a favorite toy anymore. Bonnie leaves him in the closet – and he even gets his first dust bunny. Woody is so used to leading the room, leading the toys, but he doesn’t need to anymore. There is a new sheriff in town, as Bonnie chooses Jessie to take on that role.

I could see it in Woody’s eyes that he was heartbroken. And he missed Andy. And he just didn’t know what to do anymore without him. Was he truly Bonnie’s toy? Yes. But is that where he needed to be? Not really.

This is the part where my six year old had me sobbing harder than I ever thought I could. Gabby Gabby takes the time to explain to Woody where she is coming from. She wants his voice box because she never got a chance to be a toy, to be played with. Gabby Gabby was made defective from the factory – and never belonged to a child.

She didn’t want Woody’s voice box to be a villain – to be mean. She just wanted what he had already had with Andy. More than anything. My daughter started crying around this time – I mean REALLY crying – and I asked her why. She told me she really felt bad for Gabby Gabby. And so did I.

This is where you truly realize that Gabby Gabby is not a villain after all. She is just a doll, wanting a kid to love her. Never judge a book by its cover I suppose. Get to know someone, and where they are coming from, before you make up your mind about them. 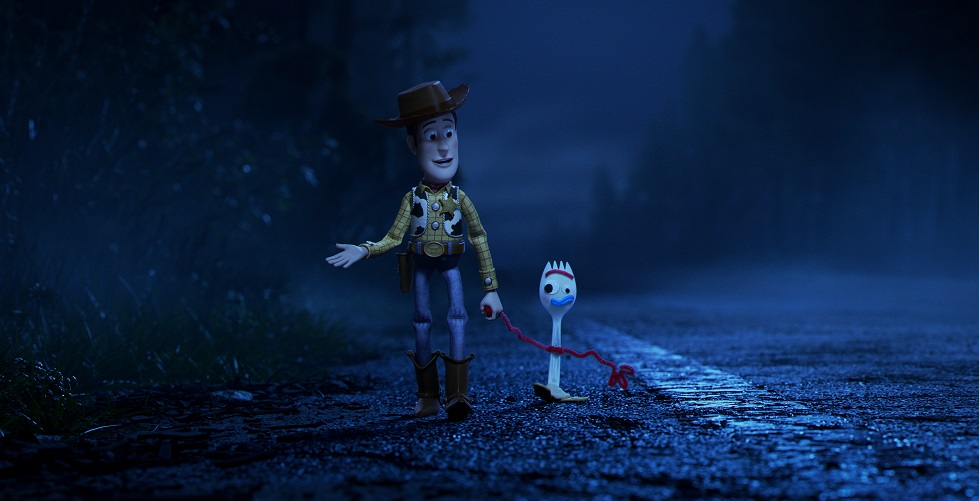 When Woody Gives Up His Voice Box

After Gabby Gabby explains why she is the way she is (and you realize she really isn’t a villain after all), Woody decides to give up his voice box. Bonnie rarely plays with him so he doesn’t use it much anyways. And he had the chance to be a favorite toy – he wanted to give Gabby Gabby that chance too.

This part shows the true character of Woody. Sheriff Woody to the rescue, just like always, as Bo Peep would say. This warmed my heart – and I was very thankful for my kids to see him sacrifice for someone else. I wouldn’t want them going around giving up their voice boxes or other body parts – but to understand sometimes someone else needs something more than you do – that is a great lesson.

After all that – years of trying to get to Harmony. Harmony tosses Gabby Gabby in a box. She is offered Gabby Gabby by her grandmother, and passes. That was hard to see. Just when I started to like Gabby Gabby – she gets tossed away.

It was obvious how much this hurt Gabby Gabby. In fact, she tells Woody he can have his voice box back. I was shocked that this is how things played out. I really thought Gabby Gabby and Harmony would be together and happy. But that was just not in the cards, and it was heartbreaking to watch.

I didn’t cry – but I did cheer for Duke Caboom when he made the big jump the carnival! We had already heard his story, of how he disappointed his child. That made me sad to think that Duke did not know just how amazing he was! But he couldn’t jump like in the commercial, and his brat of a kid didn’t want him anymore (yea, I said it!)

I was so proud of him (does that even make sense?). He made a HUGE jump – and he yelled out that it was for his (old) kid. Awwwww…. how sweet is that? Although that kid did not deserve it if you ask me!

If you don’t cry during this part, you have no soul. Period. The end.

Woody, Bo, Ducky and Bunny, and Gabby Gabby spot a crying lost little girl. The plan was to get Gabby Gabby to Bonnie, but when they stumbled upon this girl, Gabby Gabby knew it was her girl. Her kid. As the little girl picked her up, it gave her the confidence to go find someone to help her get back to her parents. ALL THE TEARS.

This moment made me think of my children, and how scared they would be if they got lost. See, everything happens for a reason, and it all works out in the end. Harmony didn’t want Gabby Gabby because this other child NEEDED her.

Buzz Telling Woody She Will Be OK

At the end of the movie, after all the racing around to get the toys back to Bonnie’s RV, Woody has a tough decision to make. Should he leave Bo, who he just found again, or leave Bonnie? I still think Bo Peep should have hopped in the RV with them, but she loved being a lost toy – free to roam the big wide world.

When Buzz and Woody just stare at each other for a moment, and Buzz says “she will be OK.”, I knew what he meant. And it BROKE me. He wasn’t saying that Bo would be OK without him – he was saying that Bonnie would. He was giving his best friend permission to leave the gang – to go be happy.

Woody will now be traveling with Bo, Giggles, and Ducky and Bunny as a “lost toy” (which Buzz points out that he is “not lost anymore”) — that is when I was a HOT MESS. I could not hold it together. Although this is truly the ending Woody deserved.

That Last Line Though…

Woody hands over his Sheriff badge to Jessie. He passed the baton, so to speak. Earlier when playing, Bonnie had taken it from Woody and given it to Jessie. Tears were streaming down my face and I thought it could not get any worse than this.

Then, as the RV pulls away, we hear Buzz say “To Infinity…” and Woody look at him, and ends it with “…and Beyond“. Yea, as I write this I am sobbing. For Woody to say that. Just WOW. It really rips your heart out. But it is pure MAGIC.

Tom Hanks (voice of Woody) even said in our interview that he was taken aback by this last line. And he faced the wall to record it – without anyone looking at him. Tim Allen (voice of Buzz Lightyear) said it was a hard moment for him as well. He has struggled with loss, and gain, in his life. He compared this to a daughter getting married. You are sad because they are leaving, but happy because they are gaining something.

What were your favorite emotional moments in Toy Story 4?

Watch my video countdown of my top 10 most emotional moments of Toy Story 4 below. I tried not to cry, I really did. And I almost made it! Almost…

Woody (voice of Tom Hanks) has always been confident about his place in the world, and that his priority is taking care of his kid, whether that’s Andy or Bonnie. So when Bonnie’s beloved new craft-project-turned-toy, Forky (voice of Tony Hale), declares himself as “trash” and not a toy, Woody takes it upon himself to show Forky why he should embrace being a toy.

But when Bonnie takes the whole gang on her family’s road trip excursion, Woody ends up on an unexpected detour that includes a reunion with his long-lost friend Bo Peep (voice of Annie Potts). After years of being on her own, Bo’s adventurous spirit and life on the road belie her delicate porcelain exterior.

As Woody and Bo realize they’re worlds apart when it comes to life as a toy, they soon come to find that’s the least of their worries.