We are a family that loves to play games. In fact, many nights and days are spent around the dining room table playing board games. Playing games as a family at least a few times a week is something that I grew up doing and feel is very important to continue with my daughters. The Smiths are also huge fans of the Despicable Me and Minions movies. My girls flip over the little yellow guys, and my husband and I enjoy the fact that this a franchise we laugh at while watching too. Hasbro has recently released some Despicable Me 3 themed games in celebration of the new movie which hits theaters later this month!

Two of our favorite games, Operation and Bop It, got a “Minions makeover” and it made for a super fun family game night! We were lucky enough to have Universal Pictures and Hasbro send us these games to check out – and let me say, they are a hit! We have played Operation many times, but this Minions version just seems to be so much more fun! The things we are having to pull out of this poor guy are hilarious – a banana, ice cream, cheese, the list goes on!

And don’t get me started on how addicted we are to Bop It! now. My husband immediately got the record of 86 the first time he touched it, and the girls and I are trying hard to catch up to him. My youngest has gotten 5 (which is pretty amazing for her) and my 5 year old has gotten 14. I am in the 50s somewhere but I am imporving with every time I play it.

Illumination, who brought audiences Despicable Me and the biggest animated hits of 2013 and 2015, Despicable Me 2 and Minions, continues the adventures of Gru, Lucy, their adorable daughters—Margo, Edith and Agnes—and the Minions in Despicable Me 3. Directed by Pierre Coffin and Kyle Balda, co-directed by Eric Guillon and written by Cinco Paul & Ken Daurio, the animated film is produced by Illumination’s Chris Meledandri and Janet Healy, and executive produced by Chris Renaud.

Joining Steve Carell and Kristen Wiig in Despicable Me 3 is Emmy, Tony and Grammy Award winner Trey Parker, co-creator of Comedy Central’s global phenomenon South Park and the Broadway smash The Book of Mormon. Parker voices the role of villain Balthazar Bratt, a former child star who’s grown up to become obsessed with the character he played in the ‘80s, and proves to be Gru’s most formidable nemesis to date. The film will be released in theaters on June 30, 2017.

BOP IT! DESPICABLE ME 3 EDITION GAME

Ages 8 + Retail Price: $14.99
Get ready to pull it, twist it, and bop it with the BOP IT! DESPICABLE ME 3 Edition Game! Just like the classic BOP IT! game, players must quickly perform the silly actions called out by Agnes in order to beat the game! Pull down on Minion Stuart’s legs, twist his eyeglass lens, and bop the top of his head in this fun and fast-paced memory game. The BOP IT! DESPICABLE ME 3 Edition Game features the voice of the adorable Agnes and sounds of Minion Stuart. Requires 2 ‘AAA’ batteries, demo batteries included. 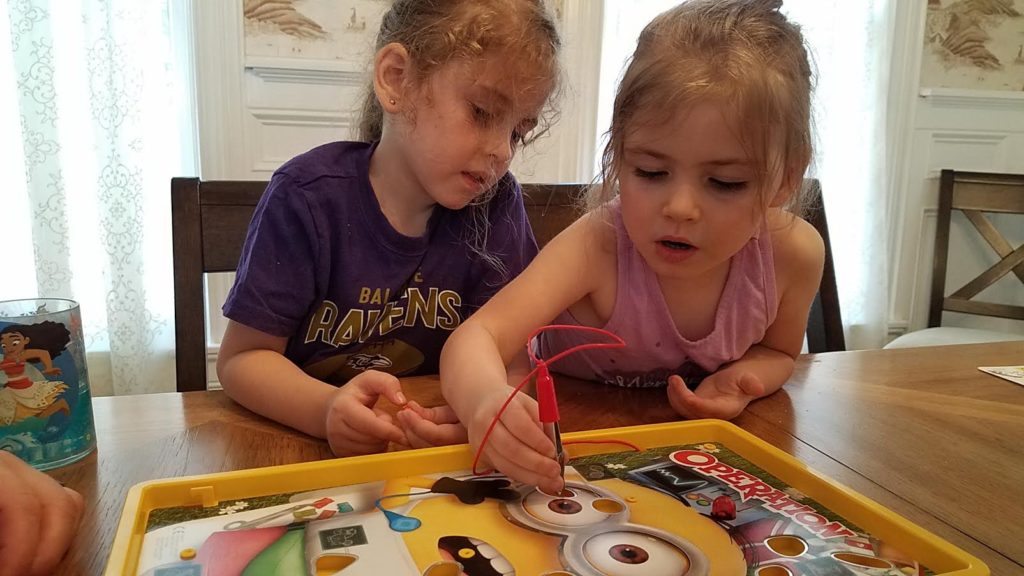 Ages 6+ Retail Price: $19.99
After a long vacation, Dave needs some help! In the OPERATION: DESPICABLE ME 3 Edition Game, help the MINIONS fix Dave’s wacky ailments by using tweezers to pick silly “Funatomy” pieces out of the game tray. Keep a steady hand and move cautiously, because the second you bump Dave, the buzzer will sound! The player who removes the most “Funatomy” pieces wins the game! The OPERATION: DESPICABLE ME 3 Edition Game includes a game board, tweezers, and “Funatomy” pieces. Two “AA” batteries required, not included.

Both games are available at most major toy retailers and on HasbroToyShop.com.

DESPICABLE ME 3 Hits Theaters on June 30!

Enter to win two (2) Despicable Me 3 themed Hasbro games: Bop It and Operation using the Gleam form below. Be sure to check out my other giveaways while you are here and GOOD LUCK!

Open to US mailing addresses only. Prizing and samples courtesy of Universal Pictures and Hasbro Games.