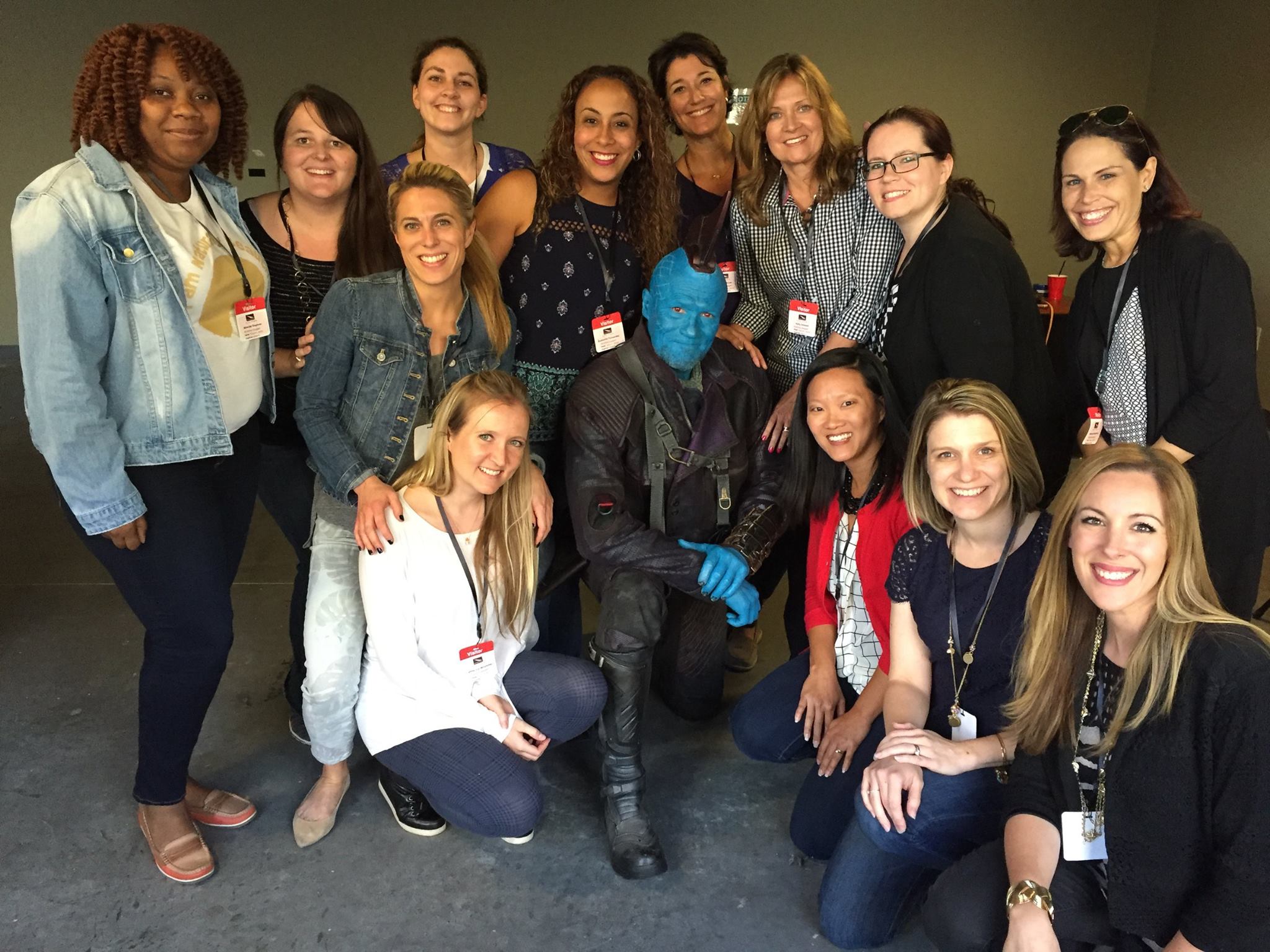 While on the set of Guardians of the Galaxy Volume 2, one of the actors I was able to interview was Michael Rooker, who reprises his role of Yondu in the sequel. Michael is one of my favorite actors – I absolutely loved him in The Walking Dead as Merle – and as Yondu in the first Guardians movie. To me, he always seemed like he is an off the wall and fun type of guy. And boy was I right! The first thing he did when he walked in the interview room was look all of us ladies right in the face. He said “let me look at you – y’all are purty“. Not many actors take the time to look at you – really look at you – when you are interviewing them. He even asked us several questions throughout the interview, like where we were from and how many kids we each have. It was like he truly wanted to know about us as individuals. I think we all appreciated this, I know I did.

He showed us all his eyes, which had contacts in since he was in full costume (amazing to see up close and personal, by the way). Then as soon as he sat down he told us he had a show and tell for us – his Yondu teeth! Being a Guardians of the Galaxy nerd, this was really cool for me to see. He showed us his upper teeth and his lower teeth and even put them in for us. His voice immediately changed because of the teeth – he had a slight lisp and you could tell he was talking with something in his mouth.

“That is some good looking man there. I know. I do the same thing when I [see] myself in the mirror with it. We got to learn how to talk with these. My voice is already a little bit throatal and so I just keep it back here (meaning talks with his voice in the back of his throat) – it’s better if I don’t have a regular conversation. But if I’m yelling at somebody then you can’t tell that I got anything in my mouth.”

He yelled for us, as Yondu loves to do, and wow! You really couldn’t tell he had his teeth in. Probably one of my favorite parts of the interview, because I am such a fan of Yondu, was when Micheal did his whistle for us! We asked if it was his real whistle or if they just added one in the movie and WOW – it was for sure his whistle. It was so loud! He let us know that it is harder to do with the teeth in and that they do end up enhancing it a bit for the film, but it is in fact his whistle.

The Yondu makeup was quite impressive to see in person. Michael was totally blue, right down to his hands, and so someone asked him how long it takes to become Yondu each day. “About two hours. Half of this is makeup and half of this is just me. I’m like a blue man from Kentucky. (We all laughed but he wasn’t making that up – there is a such thing, google it!) You know they have real blue people in Kentucky and they’re called the Blue People of Kentucky.”

By now, you all know about Yondu’s new fin – which is a nod to the comics and one of my favorite parts of Yondu. I was thrilled to see Michael walk in with it on and cannot wait to see how it is addressed in the film. “A lot of people like this fin – and it’s awesome. The fin’s not heavy – not at all. It’s hollow. I thought they were going to put lights and different things in it, but they decided not to. They just decided to keep it just natural and – well, it’s not natural. It’s a fin growing out of my head. So they didn’t put the lights in. If they’re going to do that kind of stuff, they’ll do it in post-production.”

I am interested to see if they do add in any lights. When asked how the fin will be incorporated in the story line, Michael let us know he couldn’t tell us much. “You saw my fin the last movie – it was a short little stubby thing. That worked for my ship. That’s what they told me anyways – your ship is low and with a regular big fin, you would be hitting the ceiling. I was like, oh, okay. So I fell for that. This time around, I have a little of both. I have the short fin and this fin here.”

Teaming Up With the Guardians

In this movie, Yondu has now teamed up with the Guardians of the Galaxy – or as he put it – they teamed up with him. “They’ve teamed up with me. Please. I’m the one that can whistle and take out a whole army, okay?” Of course, we had to ask him how he felt about script and the second film – is it true to his Yondu?

“It’s a great script. [James] Gunn wrote it and it’s a continuation of Yondu in the first script. He wrote that for me. He wrote more odd things that I get to do because he knows me and he knows I’m a wee bit odd, so he just plays on it and writes some silly things. It’s not all silly, but it’s fun. It’s a lot of fun. I have a good time doing it and he’s a good writer, a great director – and I was forced by to be in this movie. If you guys can call the hostage rescue team and get me out of here – if he hears that I’ve been saying this, he’s going to come and he’ll hurt me again. He’ll make me do another scene while he’s directing. It’s so painful. He is a great guy. Great director. We have a lot of fun.”

As you can probably tell, Michael had us laughing a lot. He brought up being a hostage a few times – and each time, he looked so serious! He really was such a fun interview.

A Softer Side to Yondu?

We were wondering if the audience will get to see a different side of Yondu in this film. Since towards the end of the first one, he kind of started to show he cared. “You do see some differences from the first one. You don’t get too in depth with the first one. We get to learn a bit more about Yondu and his relationship with Quill. You [get to]experience some more cool stuff with Yondu. Definitely. It’s not too hard [to get into character]because it was really written for me. I think the thing that attracts the audiences to this film is the characters are very human-like. We have our faults. We all think [we are]better than we really are.”

We tried really hard to get more information about the film from Micheal – and so someone asked him if Yondu’s crew rebels. “Who told you that? I’m here to entertain you. I’m not here to give you any kind of information. My crew is a very violent and aggressive crew. They’re always looking for a weakness. They’re always trying to challenge me in the background and trying to figure out ways to be the leader – like any kind of rebel, skull and cross bone group of crazy maniacs. There’s loyalty going on, but there’s also a lot of rivalry. There’s this rivalry and for me, it goes on all the time because of who Yondu is. He’s the leader of this whole ravager group.”

Why Take the Role?

Micheal continued to make us laugh when we asked him what attracted him to the role of Yondu. He told us that he did not have a choice, and that James Gunn was holding him against his will to complete the filming. When asked if he had had a choice, what would have attracted him to the role, he told us the pay day. The pay day’s nice. My pay day’s not the biggest pay day, but it’s a good pay day. It’s nice for my mortgage and people like me more when I have money.” I immediately thought of when he was on The Talking Dead and was asked if he preferred to play Merle or Yondu and he said the pay day for Yondu was better.

The last thing we asked him was who his favorite character in Guardians (besides Yondu) is and why. Michael went with Rocket. “Rocket’s got the attitude. He reminds me of James Gunn a lot.” Micheal Rooker was hands down one of my favorite interviews I have ever done. He was fun, down to Earth, and seemed to really care about us. He didn’t let the interview be all about him. I truly hope our paths cross again in the future – what a great guy!

GUARDIANS OF THE GALAXY VOL. 2 is in theaters May 5th!