tick, tick….BOOM! is a love letter to the Broadway and musical theater community. It may be rushed and choppy, but Andrew Garfield gives it his all.

tick, tick…BOOM! may not be perfect, but it certainly has its reasons to watch. Andrew Garfield is completely in his element here. His performance is completely captivating from the moment he is first shown on screen to the last.

Overall the pacing of the film feels quite rushed as viewers will find themselves feeling like they are thrown from one moment into the next. That said, Lin-Manuel Miranda’s directorial debut has its moments, some of which are quite beautiful.

This movie is an adaptation of a musical, which I have to admit, I have not seen. So I watched this film with completely fresh eyes and having nothing to compare it to.

For those who are fans of the stage show, I cannot speak to if it will live up to expectations or not, but what I can say is that it is an entertaining journey to go on. And as a massive fan of RENT, this was an eye opening story about the life of Jonathan Larson. 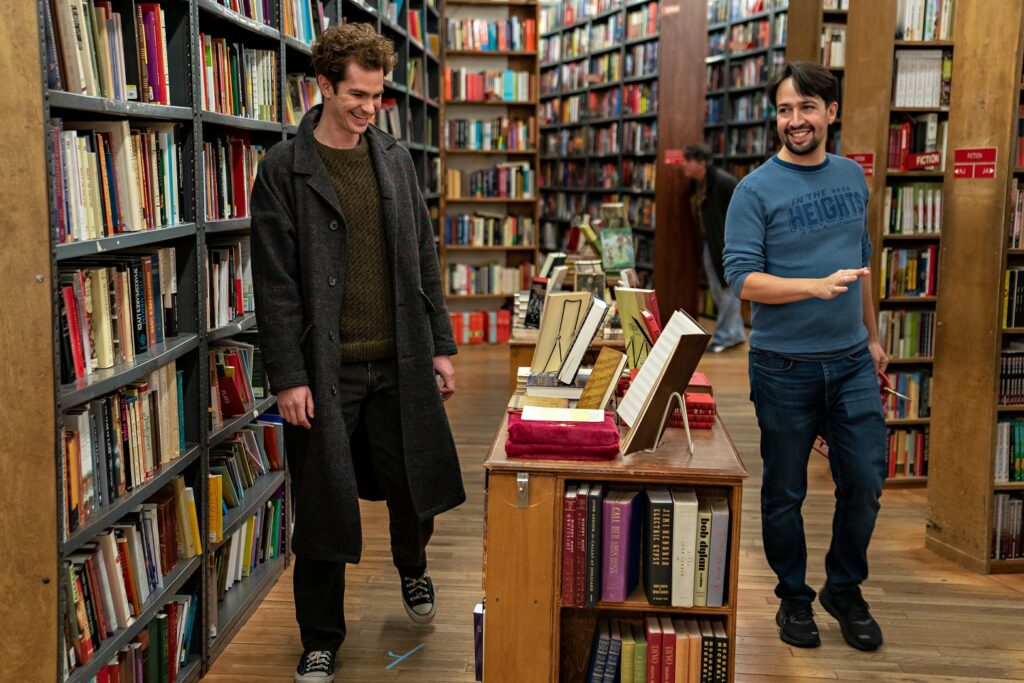 What Works With tick, tick…BOOM!

Andrew Garfield is hands down the best part of this movie. He truly shines in every single scene as it is obvious he gives this role his all. He pours his heart and soul into it and it truly pays off. Because of him, the movie is worth watching. Perhaps even worth watching more than once.

It is a powerful performance that is sure to evoke laughs, smiles, and many, many tears.

Garfield makes up for any issues that this movie has and then some with his acting, singing, and dancing. He becomes Jonathan Larson by embracing the chaos and intensity of the real man.

tick, tick…BOOM! is a love letter to the musical theater community not just in the story and the scenes, but with the music. Nearly every song is toe-tapping and catchy, and their placement in the film helps to drive the plot forward, although sometimes too quickly.

Another great thing about this movie is the connection that Larson has with all of his friends, particularly Mike. It is heartwarming to see on the screen and helps drive home some great lessons about friendship, but also about living each moment to the fullest.

Larson is so concerned about running out of time and about his 30th birthday, while not even knowing he won’t live past 35.

For Broadway fans, there are a lot of cameos sprinkled throughout the movie that will make them smile from ear to ear. Surely this is director Lin-Manuel Miranda’s doing, who is a talented writer of musicals himself.

Miranda’s love for theater shines through easily, making much of this movie a complete joy to watch.

What Doesn’t Work With tick, tick…BOOM!

This movie is told in an interesting way. Andrew Garfield’s character, Jonathan Larson, is on stage performing and describing it, while sprinkled throughout the movie are scenes acting out his story.

Because of this jumping around, the film is choppy and disconnected at times. It also feels like it tries to do too much in two hours, and seems to never slow down. The positive side of this is that the two hour runtime isn’t felt, and the majority of the film flies by.

This is Lin-Manuel Miranda’s first time as a director. Even though he has had a lot of experience with writing musicals, it is clear that this is a new path for him. This is not necessarily a bad thing, but he certainly has room to grow.

Related: In The Heights Is A Vibrantly Beautiful Musical Masterpiece

tick, tick…BOOM! is not perfect, but it is Andrew Garfield’s commitment to his performance that makes it more than worth watching. The supporting actors do a great job as well, but Garfield is just so captivating that he demands attention when he is on screen, pulling attention away from the others.

This is Lin-Manuel Miranda’s directorial debut and while he has some things to work on, the only issue here really is the pacing and how choppy the style of shooting is when going back and forth. The movie seems to fly by, which is impressive for being two hours long, but because of this the audience will feel like they never have a moment to breath.

It could be worse though, tick, tick…BOOM! could have been slow and boring instead of the whirlwind that it is.

Andrew Garfield puts his heart and soul into this role, which pays off because he is the reason to make sure you don’t miss tick, tick…BOOM!

Pulitzer Prize and Tony Award winner Lin-Manuel Miranda makes his feature directorial debut with tick, tick…BOOM!, an adaptation of the autobiographical musical by Jonathan Larson, who revolutionized theater as the creator of Rent.

The film follows Jon (Academy Award nominee and Tony Award winner Andrew Garfield), a young theater composer who’s waiting tables at a New York City diner in 1990 while writing what he hopes will be the next great American musical.

Days before he’s due to showcase his work in a make-or-break performance, Jon is feeling the pressure from everywhere: from his girlfriend Susan, who dreams of an artistic life beyond New York City; from his friend Michael, who has moved on from his dream to a life of financial security; amidst an artistic community being ravaged by the AIDS epidemic.

With the clock ticking, Jon is at a crossroads and faces the question everyone must reckon with: What are we meant to do with the time we have?

tick, tick….BOOM! is in theaters now and comes to Netflix November 19th.