My daughters love to game, just like their mama, so they were thrilled to check out the WizKids Games Crate from Loot Crate, which is perfect for gamers!

I told you guys about the new WizKids Games Crate from Loot Crate a little bit ago and now that we have had a chance to check it out, I am excited to tell you more about it. This crate’s theme was Medieval Madness, so we were on the edge of our seats waiting to see what games would show up at our door. For those of you that don’t know, the WizKids Games Crate comes with three games — the perfect way to upgrade your family game night!

Loot Crates make the BEST gifts because they are the gift that keeps on giving. You can get a six month subscription (that comes with a free gift!). The Medieval Madness crate came with the following games: Sovereign’s Chain, Thrown, and Fungeon Party. They came on a Friday night which was perfect, because it meant we were going to have an EPIC family game weekend!

We had so much fun playing games as a family all weekend. Right now the world is crazy and the weather is getting colder, which means we are going to be spending a lot of time inside. As you know already, my family loves to game together — video games yes, but also board games. We like to put away our electronics and just enjoy each other’s company. There is nothing like bonding over a good game day!

Something I really love about the WizKids Game Crate is that we got games I had never heard of before. This gave us the opportunity to try new ones that we never would have known about had it not been for this Loot Crate! And boy am I glad because we had a ton of fun with all of them. They are definitely ones we will play time and time again. 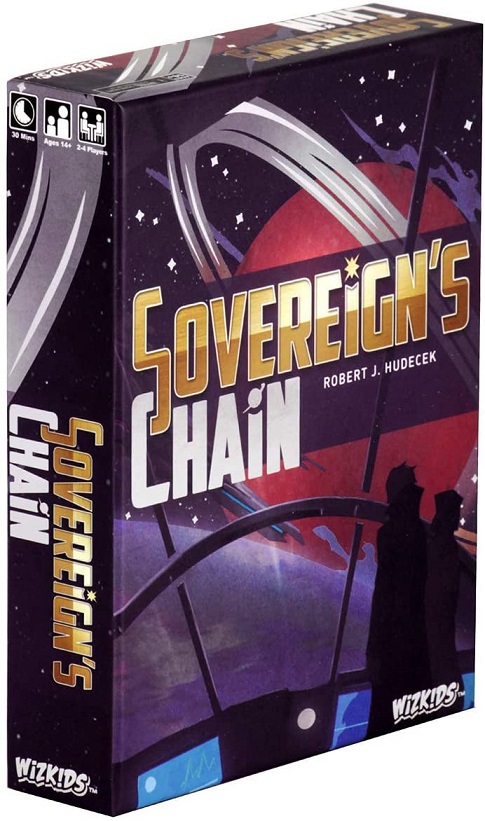 Sovereign’s chain, a strategic, cutthroat card Game, is so named due to the class cards played in front of players, forming chains. You can play cards onto your own chain or those of your opponents. While most cards are played faceup, activating their abilities, some can be played facedown to be activated later.

Class cards come in two suits, stars and planets, and to win, you must have the highest difference in points between These two suits when someone’s chain reaches seven cards. To add a wrinkle to the Game, A small deck of event cards is included, with unique effects that change the Game completely.

This game says ages 14 and up but my daughters, who are 7 and 9, were able to play with just a little bit of our help. This one is actually my 9 year old’s favorite of the three we received. Sovereign’s Chain is a game that I recommend because it created a lot of laughs for our family! We love a game that has us going against each other, and this is one of those games. It was an absolute blast to play.

If you do not have the right suit, then you can roll for trump: rolling a natural 6 on one of your dice in an off-suit will beat the highest value in-suit. Winning a trick gives you gold. The game ends when there are a number of rounds played equal to the number of players. The winner is the player with the most gold.

But wait, there are cards in the game too! These cards give special abilities which are paid for, or activated with, dice of particular colors. Some of the effects include: flipping your or your opponent’s dice to their opposite sides, removing dice, re-rolling dice, automatically winning with a particular roll, and more!

Thrown is a ton of fun for the whole family! another game that will have you trying to take each other out. If you like trump games, this is a really fun one that will likely be your first choice when you are in the mood. Both my daughters had no issues learning the rules and playing along. My 7 year old actually kept winning!

Stack dice on your forehead, bounce dice into the box, knock down a meeple surrounded by dice, balance a meeple on a stick. These, and many more wacky quests await a traditional dungeon party in this truly untraditional dungeon crawler. Each quest adds 30 seconds to the game and an average game uses 6 quests making this a quick, easy, and FUN game to learn and play!

Fungeon Party was my personal favorite of the three games because the family bonding moments were REAL during it. We were all cracking up and creating memories that will last a lifetime. Plus, this is a great one to play on a weeknight because it is quick. 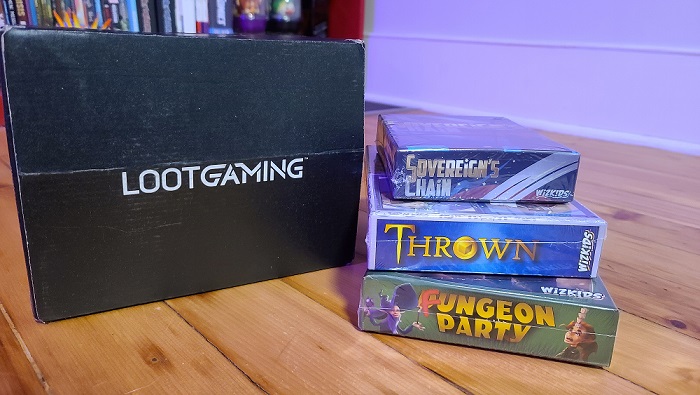 Games Crate will upgrade your family game night with awesome tabletop games. This mystery subscription crate is delivered every other month and includes 3 WizKids tabletop games (a $50+ value!) to your door! Every crate is a surprise and can include card games, mini-games, strategy games, and more!

A single crate is just $19.99 (plus shipping and handling) which is a pretty great deal considering I usually spend more than that on just one game. You can also opt for a six-month subscription which includes a free gift for $149.94.