Taylor Swift – Folklore The Long Pond Studio Sessions is so much more than songs, there are some great quotes too!

Yesterday Taylor Swift surprised the world when she announced a new movie coming to Disney+. Taylor Swift – Folklore: The Long Pond Studio Sessions is so much more than a recording of her singing the songs from her new hit 2020 album, folklore.

In this special movie, which is about an hour and forty-five minutes long, she discusses each of the songs, as well as the creative process behind making the album. We all were thrown for a loop in 2020, and let me tell you Taylor Swift is one of the ones that made the most of it!

Folklore: The Long Pond Studio Sessions is more than just Taylor Swift singing the songs from her hit album folklore — she discusses each one as well as recording the album which gives some great quotes. The ones below are my favorites. If I missed your favorite Taylor Swift quote from this movie, let me know.

“I sort of unexpectedly started writing the new album, and at that point I was just like ‘Oh, I’m just writing songs in quarantine,’ and then it became an album really quickly.”

“I know that other people do this all the time so it’s actually not that special but I’m freaking out over it. We’ve built a home studio in my house.”

“It’s like you’re right there but instead you’re in New York.”

“When lockdown happened I just found myself completely listless and purposeless.”

“I didn’t even tell my label until a week before we put it out.”

“I think it’s really important that we play it. I think it will take that for me to realize it’s a real album.”

“There’s something about the complete and total uncertainty about life that causes endless anxiety, but there’s another part that causes a release of all the pressures that you used to feel.”

“It turned out that everybody needed a good cry, as well as us.”

“I’m just putting out an album in the worst time you could put one out.”

“I had been wanting to write a song about Rebekah Harkness since 2013, probably.”

“You listen to country songs and you’re just like shivers, everywhere, my whole body.”

“Picking a track five is sort of a pressurized situation but I knew from day one this was probably going to be it.” on my tears ricochet

“Writing this song it occurred to me that in all of the superhero stories the hero’s greatest nemesis is the villain that used to be his best friend.”

“There’s this beautiful moment in the beginning of a friendship where these people have no idea that one day they’ll hate each other.”

“It’s a metaphor for everyone who feels like they have to be on for certain people. You have to be different versions of yourself for different people.”

“When did I stop being so outraged that I would throw myself on the floor and throw the cereal at my mom?”

“In my head I think Betty and James ended up together. She ends up with him, but he really put her through it.”

“The idea that there’s some bad, villain girl, in any type of situation who takes your man, is actually a total myth because that’s not usually the case at all.”

“Everybody has feelings and wants to be seen and loved.”

“This is the first album that I let go of that need to be 100% autobiographical.”

“That’s my favorite thing about this album. That it’s allowed to exist on its own merit without it just being ‘oh people are listening to this because it tells them something that they could read in a tabloid.'”

“I wrote it after I sent an ex a baby gift.”

I love this one because she is clearly talking about sending Joe Jonas and Sophie Turner a gift to celebrate the birth of their baby, and I kind of love it.

“For centuries we’ve been expected to absorb male behavior silently.”

“I tried to imagine what would happen in order to make you never be able to speak about something.”

“There have been times in my life where things have fallen apart so methodically and I couldn’t control how things were going wrong, and nothing I did stopped it.”

“This lockdown could have been a time where I absolutely lost my mind, and instead this album was a real floatation device for both of us.”

“You let someone in and they get to know you and they know exactly what buttons to push to hurt you the most.” 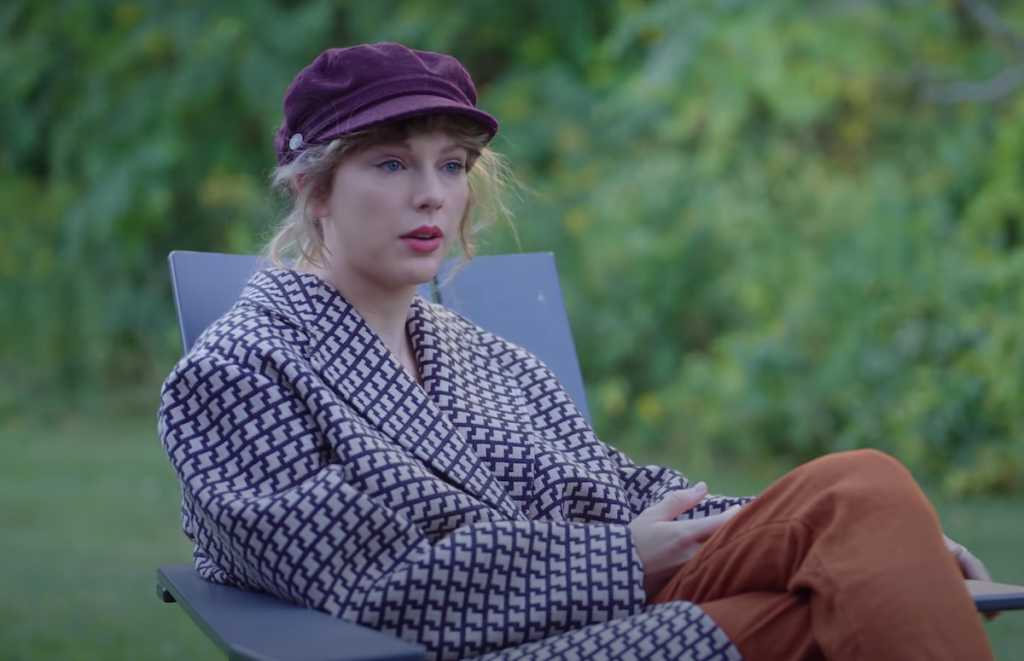 Taylor Swift performs this intimate concert of every song from her recent album, “folklore.” Accompanied by her co-producers and filmed at the historic Long Pond Studios, a setting that evokes the nostalgic, wistful nature of the album, Taylor discusses the creation and meaning of each song as they record their first in -person performance together, since remotely producing the collection.