Blood Of Zeus is the anime we have all been waiting for — perfectly combining Greek mythology into the anime world. This show is a can’t miss!

Blood of Zeus is a new anime coming to Netflix on October 27th and trust me, you do NOT want to miss this one. If you love Anime, Greek mythology, Lord of the Rings, and Game of Thrones — you will love this show! It is beautifully animated, perfectly voice cast, and WOW it plays like a movie. With only 8 episodes, you can totally binge-watch it all in one day!

Something you may not know about me is that I am part Greek! Yes, my maiden name is Alexopoulos (and yes, I hated learning to spell it) but honestly, I know no Greek. I went to Orthodox Church right up until the learning to read and write Greek part. Stinks because that is a skill I wish I had now. And yes, I am way too old to learn.

Anyways I am getting off topic now, my point is, that I love Greek mythology. They always felt like Aesop’s Fables but WAY cooler to me. The way that all of the Gods and Goddesses are connected and the stories that come from their relationships are just mesmerizing. I get sucked into that world and I love every second of it. That is why I was intrigued by Blood Of Zeus the moment I heard about it. Not to mention, I love Anime.

From the first episode of Blood Of Zeus I was hooked. So much so that I finished the series in about two days. I would have watched it quicker but my husband works outside of the home and he refused to let me watch it without him. Not only is this show beautifully animated and looks like a movie, it plays like a movie too. The perfect shots, the epic battles, the deep story — it all comes together beautifully and I am totally here for it.

If you have seen the trailer, then you know about one of the small twists, I will not mention it because I want to keep this review as spoiler free as possible. But I will say that was a good twist, but I kind of saw it coming. There are a few more that WOW, I did not see coming and I was jumping up and down in my seat when they were revealed! 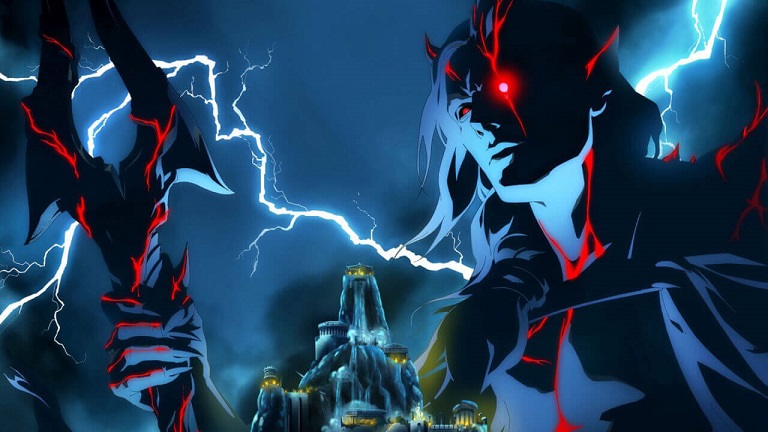 Blood Of Zeus is one of those shows that is going to suck you in. You are going to be on the edge of your seat, rooting for the good guys (or the bad guys, you do you boo boo), and eager and excited to see how the whole thing plays out. Even if you know Greek mythology really well, trust me, there will be surprises.

The villains in this show — the demons if you will — are some of my favorite characters. You guys know I love a good villain and these guys are interesting. Their backstory is pretty awesome and honestly, one of my favorite scenes in the entire series. Plus they look cool.. like REALLY cool.

Of course the heroes in Blood Of Zeus are pretty amazing too. We have Heron, whose character arc I am obsessed with. We also get a good mixture of Gods and Goddesses and MAN did I love Hera in this. For so many reasons. Not only is she gorgeous, she is a strong woman and as a woman myself and a mom of girls, I dig that.

Zeus is, of course, great too. I think a lot of the characters stuck with me because of the voice acting. They made me believe these characters. I knew why they were doing what they were doing and could actually sympathize with each and every one of them. Yes, I have to keep it that vague to avoid any sort of spoilers. There is so much I want to say about this series, but don’t worry!

I will be doing a SPOILER LIVE CHAT with the creators Charley Parlapanides & Vlas Parlapanides and the Director Shaunt Nigoghossian on my YouTube Channel after release so we can get it all out!

I truly am afraid to go too deep into this show because I refuse to give any spoilers. I want you all to go in with fresh eyes and minds, just as I did. There are lots of twists and turns that will likely take you by surprise — in the very best of ways. If you watch the episodes back to back, it really does feel like a complete cinematic experience.

The voice acting is spot on, the animation itself is beautiful (I could spend hours just looking at the backgrounds of scenes), and the story is great — no, fantastic. Plus the season ends with a bit of a cliffhanger so I need you all to watch it so we can get season two!

Just think Greek mythology, anime, Lord of the Rings vibes, Game of Thrones vibes, and cool deaths. We can’t forget the cool deaths! Blood Of Zeus is a must watch for fans of any of those things. Trust me.

Check out my favorite Blood Of Zeus quotes.

About Blood of Zeus

Set in the world of Greek Mythology, BLOOD OF ZEUS tells the story of a young man, who cast aside by his people, learns that he is the illegitimate son of Zeus. He alone can save both Heaven and Earth but to do so he must survive the vengeful wrath of a goddess who wants him dead and the monstrous forces of evil she aligns against him.