Wizards: Tales Of Arcadia is available to watch now on Netflix! Earlier this week I chatted with Colin O’Donoghue (Douxie) and Executive Producer Marc Guggenheim about the final chapter of Tales Of Arcadia.

Wizards: Tales Of Arcadia is now available to watch on Netflix and trust me, you are going to want to binge all ten episodes as soon as you start! The whole season will take you less than five hours to watch and it is more than worth taking the time to do it.

I was sucked in from the very first moment. Mostly because I love the character of Douxie, even though we have not seen much of him before this, and was excited to see him starring in this series. Wizards: Tales Of Arcadia is filled with magic and wonder and is a must watch! If you are a fan of the series, you are sure to love it. But even if you don’t know much about Tales Of Arcadia, Wizards can be a stand alone. Although I can’t guarantee you won’t want to watch the rest of the series after seeing this one!

I was so excited to sit down and talk with Colin O’Donoghue, who voices Douxie, and Tales Of Arcadia Executive Producer Marc Guggenheim earlier this week. We chatted all about Wizards and I got the inside scoop and learned a lot about the behind the scenes of this show!

If you missed it, be sure to check out my Wizards: Tales Of Arcadia review. 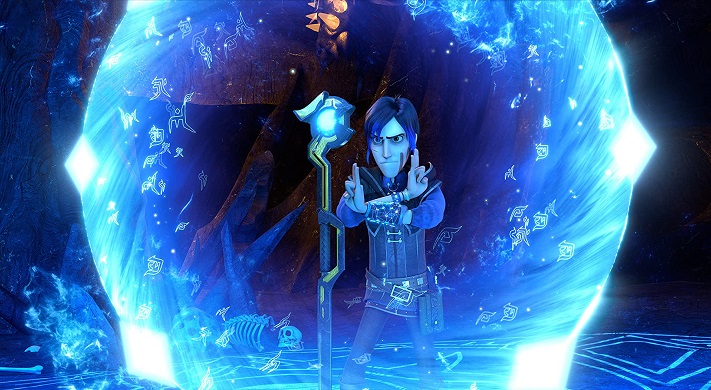 Was This Always The Plan For Douxie?

Fans of Tales Of Arcadia will know that Douxie is in a handful of episodes but was never a major character before Wizards. Of course, I just had to know how Colin O’Donoghue felt about the importance of his character in this season when he learned of it. I also wanted to know if this was always the plan for him.

Turns out, it was! Colin said they he knew when he first started Trollhunters that he was going to be a big character in Wizards. I had no idea about this but yeah, it all makes sense the way they set Douxie up to be a lead in this one. Colin even pointed out what he loves about Douxie’s introduction to the series.

“Looking back now, I think that the introduction of Douxie was great. The way he was only in a couple scenes here or there and people were just wondering, who is this guy? What is he about? With Wizards, you see the whole history of who he is and why he’s there.” – Colin O’Donoghue

Is This The End?

If you have already watched Wizards: Tales Of Arcadia, then you know it ends in a major cliffhanger. I assumed that Marc Guggenheim would not be able to talk about this, but I asked anyways. He did not confirm that this might not be the end, but he did sort of hint at it. Marc had me cracking up when he joked that DreamWorks and Netflix have assassins on their payroll so he had to stay quiet.

“If I were to tell you, it would be the end of me. DreamWorks and Netflix have a team of paid assassins on their payroll — they’re very good shots. You will not have to wait long to get an official answer to your question.” – Marc Guggenheim

So what does that mean? I could spend hours analyzing every word (and trust me, I did). What I take from this is maybe, just MAYBE there will be a follow up season. Or perhaps a film. I don’t think there will be a comic book as Marc was asked that during the interview and he said he pitched one, but it was declined. Although that could always change with the popularity of the show as well. Either way he said fans of the series will know soon — and I for one cannot wait!

EDITED TO ADD: A Netflix original feature film, Trollhunters: Rise Of The Titans has been announced for 2021! And it is currently in production!

Trollhunters… 3 Below… Wizards… the saga concludes in Trollhunters: Rise of the Titans, a Netflix original film coming 2021. pic.twitter.com/lomyDi74qw

One of my favorite things in any show or movie is Easter Eggs. With Guillermo Del Toro at the helm of Tales Of Arcadia, of course there were some to be found in Wizards. The most obvious one is the GDT Arcane Bookstore — get it? Inside that store there is also a portrait of Guillermo hanging up above the fireplace. There are even some mentions of Lovecraft and The Haunted Mansion.

Are there any more? Well Marc says those are the major ones, and he can’t think of anymore off the top of his head. Although we all know that animators sometimes slip things in without even Executive Producers knowing about it.

“The GDT Bookstore itself is an Easter Egg because if you go back to the 3Below show, that predates Wizards, you will actually see the GDT Bookstore in the background of Arcadia. We are very intentionally planting that seed, knowing that we then go to see the inside of the store.” – Marc Guggenheim

I only touched on a few of the amazing Tales Of Arcadia tidbits I learned during my interview with Colin O’Donoghue & Marc Guggenheim here. If you are a huge fan of Tales Of Arcadia, you are going to want to watch the whole interview. They get into their favorite moments, casting the voice acting, making Wizards family friendly, and so much more!

About Wizards: Tales Of Arcadia

Following Trollhunters and the second series 3Below, Wizards marks the final chapter in the epic Tales of Arcadia trilogy that brings together the three disparate worlds of trolls, aliens and wizards. In the newest installment, wizard-in-training Douxie (Colin O’Donoghue) and the heroes of Arcadia embark on a time-bending adventure to medieval Camelot that leads to an apocalyptic battle for the control of magic that will determine the fate of these supernatural worlds that have now converged.

The final chapter in the Tales of Arcadia trilogy is a high-stakes culmination of the three worlds of Trollhunters, 3Below, and Wizards as they begin to collide.