Tiger King: Murder, Mayhem, and Madness is currently streaming on Netflix and has produced the very BEST memes you will ever see. Get ready to laugh!

When my husband and I sat down one night last week and opened Netflix, I had no idea how much our lives were about to change. Up popped a trailer for Tiger King: Murder, Mayhem, and Madness and we both stared in awe for a few minutes before deciding to check out the first episode. We were then brought into the world of Joe Exotic and Carole Baskin and never looked back.

Tiger King: Murder, Mayhem, and Madness is like a trainwreck that you just cannot look away from. Just when you think this show couldn’t get any more crazy — it does. Trust me on that one. Get ready to be sucked in and lose seven hours of your life. The only reason we didn’t binge it all in one sitting is the fact that my husband has to go to work. Or else we would have.

This show is sure to take you by surprise. Just when you think you know exactly what is happening, it takes a quick turn to one side. I can’t tell you how many times I chose a side — Joe or Carol — before I realized they were both banana pants crazy. But that didn’t stop me from watching it, oh no. It just made me get more and more into it.

Is Tiger King appropriate for kids? Well I am not the one to ask, I will let my kids watch just about anything. But my friend Tania at Lola Lambchops is an expert in the field, so she has you covered with everything you need to know.

Who Are Joe Exotic & Carole Baskin?

Tiger King is about several exotic pet owners. Each and every one of them think they are in the right. But it mainly focuses on a feud between Joe Exotic (who think he is a country singer but there is no way that is his real singing voice) and Carole Baskin (who claims to be an animal activist but her big cats are locked up behind cages too).

Carole wants to destroy Joe for several reasons, but mostly because he can’t stop telling everyone she killed her husband and fed her to her tigers (she totally did). But there is so much more to this show than that. Country music, polygamy, and so much more. Every personality on the show is larger than life, and I can promise you, you won’t be able to look away. And when it ends? You will be begging for a season two.

Here you go, the moment you have all been waiting for. A collection of the best Tiger King memes that can be found all around the internet. I truly hope these make your day as much as they have mine. You are welcome. 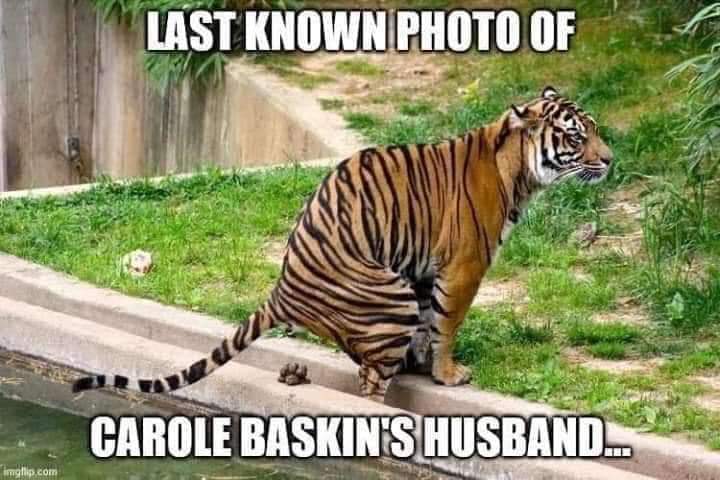 Among the eccentrics and cult personalities in the stranger-than-fiction world of big cat owners, few stand out more than Joe Exotic, a mulleted, gun-toting polygamist and country western singer who presides over an Oklahoma roadside zoo. Charismatic but misguided, Joe and an unbelievable cast of characters including drug kingpins, conmen, and cult leaders all share a passion for big cats, and the status and attention their dangerous menageries garner.

But things take a dark turn when Carole Baskin, an animal activist and owner of a big cat sanctuary, threatens to put them out of business, stoking a rivalry that eventually leads to Joe’s arrest for a murder-for-hire plot, and reveals a twisted tale where the only thing more dangerous than a big cat is its owner.