Spies In Disguise is a fantastic movie that is filled with life lessons — and very emotional moments. Here are my top 10, in no particular order.

I have seen Spies In Disguise twice now, and both times I teared up. There are a lot of moments that will really tug at your heart strings, especially as a parent. This movie teaches some fantastic lessons like always be yourself, and don’t be afraid to be embrace your weird! My favorite though is that you don’t have to fight fire with fire — sometimes fighting it with glitter is the best way.

This article will contain spoilers and major plot points for Spies In Disguise so if you have not seen it yet and want to remain in the dark about it until you can, read my spoiler free Spies In Disguise review.

WARNING: Spoilers ahead for Spies In Disguise.

Walter wants nothing more than to help the world in a positive way. He sees how the agency he works for uses violence far too often — and realizes there is a much better way. However, others see his gadgets as weird. His work space is in the back of the office by the bathroom and you can tell nobody takes him seriously.

When he gets the chance to talk to Lance Sterling up close and personal, he tries to explain how his gadgets can change the world. Then Lance fires him. And my heart ached for Walter. It was obvious he cares very much about his job, and to be fired, especially by the most popular spy on the force, that hit him hard.

Shortly after Lance fires Walter, karma comes back to bite him when he is framed. When Killian scanned his face during their interaction in the first scene, it was for a reason. He used it to change the look of his face, and steal back what Lance was supposed to be retrieving. When he sees himself steal it, knowing that he didn’t, it really threw him for a loop.

I count this scene as one of the most emotional because I felt bad for Lance — even though he had just fired Walter.

Discovery That Walter’s Mom Is Dead

OK guys, this part made me teary both times I saw Spies In Disguise. Lance is heading to Walter’s house because of their conversation in the elevator — you know, when Lance fired him. Anyways, the first time we see Walter’s house since he was a young kid, we realize something pretty depressing. His mother is dead.

There is a shrine to her that Walter set up which includes a newspaper clipping with the headline “Hero Cop Killed”. The mug that he broke as a child is also there, glued back together. Poor Walter lost his mother, and we now see why he wants to solve problems without violence. And can you blame him?

I haven’t laughed so hard at a scene in a movie in a very long time. The entire car chance between the agency and Lance and Walter is hilarious! My girls and I were cracking up — and at one point I had a hard time catching my breath. From the arguing over which method to use to stop the agency (oil slick or a whole bunch of guns) to the slow motion effects — it was perfection.

Probably my favorite part is when the pencil hits the Tetris buttons and puts the block down in the wrong spot. I feel your pain Walter, that would have made me upset too.

Walter & Lance On The Boat

One of the first really heartfelt moments we see if between Lance and Walter on the boat. Walter is working on the antidote for Lance (which doesn’t end up working) and they are discussing using lethal or non-lethal ways to fight the bad guys. It is here that you can really see just how strongly Walter believes in doing the right thing. Lance explains that you have to fight fire with fire, but Walter still tries to convince him there is a better way.

I love me some Ben Mendelsohn, so I quickly fell in love with Killian, the villain in Spies In Disguise. And by fell in love I mean he is a love to hate him kind of guy. When he is holding Walter down to retrieve the agent database from him, and calling out to Lance to come try to save him, I couldn’t help but feel there was more to him.

And when Walter throws breadcrumbs all over him, conveniently shouting “breadcrumbs!”, my girls and I started giggling uncontrollably. What a classic moment. And hey, it worked. A birdnado (as Walter so cleverly named it) distracted Killian enough to allow Lance and Walter to escape — and for Walter to place a tracker on him. Not a typical emotional moment in Spies In Disguise, but it did have me laughing — and feeling for both the villain and heroes of the movie.

It is always heartbreaking to see one character tell another to leave them alone — even if it is done to save them. When Lance tells Walter he is going to continue the fight himself, and that this is not a time for his weird gadgets, Walter won’t allow it. Lance has to shoot him with a tranquilzer and send him away himself.

But as he leaves, Lance mutters “I can’t lose any more good people.” That is when I realized Lance really did enjoy his team up with Walter, and that he was just trying to protect him. Of course this part gave me all the feels.

At this point in the movie my daughter turned to me, with tears in her eyes, and asked her why I didn’t warn her Spies In Disguise was such a sad movie. This part is by far the most emotional moment in all of Spies In Disguise for me — and probably most people.

Killian is easily able to capture Lance now that he is back in his human form, and when he realizes how much Lance cares for Walter, he uses it against him. Even though Lance sent Walter away, he returned for him when the tranquilizer wore off. He sends his drones out to blow up the submarine, and kill Walter in the process. Lance begs Killian not to do it, saying that the boy has had nothing to do with any of it, and doesn’t deserve to die. But Killian gives the order, and the submarine explodes.

Lucky for us, Walter had all of his weird gadgets on hand, and he used the inflatable hug he created to save himself from the blast. Seeing him walk in to rescue Lance gave me chills. And when he nonchalantly said he would always have Lance’s back, because that is what it means to be a team, I had tears in my eyes.

Of course it didn’t help that Lance himself shed a tear, which was by far the most emotional we have seen him in Spies In Disguise up until this point.

The final fight against Killian is one of the coolest parts of the movie! It is filled with action and I loved seeing everyone come together to take on the “bad guy”. Marcy, Eyes, and Ears join Walter and Lance in what is an action packed fight — done with all non-lethal weird gadgets Walter has come up with. The security blanket, kaleidoscope, and bonding bubbles all had me cracking up. And you know I just love the Kitty Glitter.

When Marcy and Lance get spritzed with the truth serum, I was cracking up. The things they were saying had me giggling like a school girl. Especially when Marcy was talking about her five cats named after the New Kids on the Block (I too, am a fan of boy bands Marcy!).

Lance & His Flock Save Walter

When Walter chooses to stay with Killian as he is trying to escape so that he can finish hacking in to his robot arm and save the agents’ lives, that touched my heart. He was willing to sacrifice himself for the good of others. And then he does the unthinkable. He realizes that if he shuts down the drones that will include the drone Killian is using to escape.

Which means they will both plummet to their deaths. Because Walter is not a killer, he decides to use the inflatable hug to save Killian’s life, and die himself. However that is when Lance (who has taken the pigeon formula and turned back into a bird) and his flock show up to carry Walter to safety. Awwww…. am I right?

When Eyes and Ears find Killian, floating in the inflatable hug in the water, they are surprised that Walter saved him, and sacrificed himself. They talk about it out loud and it seems like that is when Killian truly realizes what the boy did for him. His robotic eye turns from red, to blue. This is an emotional moment of Spies In Disguise because it seems like he really got it.

Walter Is Chosen To Lead A New Agency Team

The ending of the movie is great for a couple of reasons. First of all, Walter’s work is validated and I love that! We also see Lance say he won’t lead a new team without the help of Walter (even though Walter was the one being asked), which shows he has grown to really like him AND appreciate what he is trying to do.

But the main reason I love when Walter is asked to lead his own agency team is because that means there could be a Spies In Disguise 2! Let’s keep our fingers crossed — because the world needs more weird. 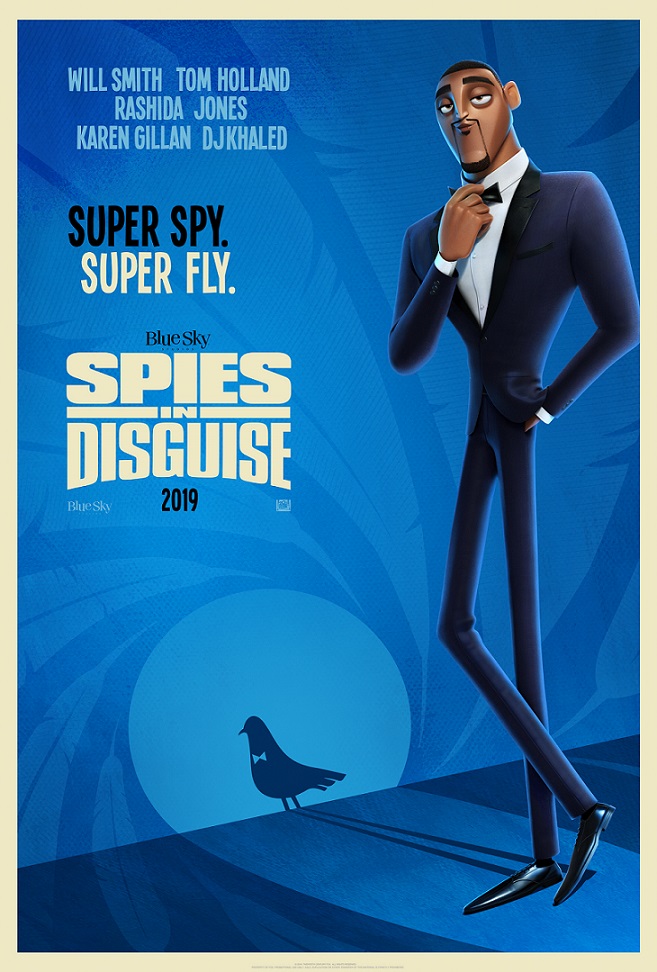