When I saw the announcement from D23 that Ms. Marvel was going to be a new show on Disney+, I was ecstatic! The “new” Ms. Marvel is Kamala Khan, and she is amazing. If you didn’t know, Carol Danvers used to use the name Ms. Marvel before she became Captain Marvel. But Kamala Khan inherited it when she came in to her powers after being hit by the Terrigen Mist.

First Muslim Character To Headline Her Own Comic

One of my favorite things about Kamala is that she is the first Muslim character to headline her own comic book. And you have to admit, that is pretty awesome. And her books are good. Like really good. She has some fun team-ups with lots of different characters, including Captain Marvel and Spider-Man. She even appears in the animated series and films Avengers Assemble and Marvel Rising.

Her Powers Are REALLY Cool

Kamala’s powers are that she is a polymorph. That means she can stretch her arms and legs, which comes in real handy when fighting bad guys and protecting civilians. She can make herself really tall, or make her hands really large — basically she can do a LOT of cool things.

Get To Know Her In These Comics

Something else I really like about her is that she is a comic book fan! I mean, clearly we are kindred spirits, Kamala and I. If you have no idea that I love comic books — do you even know me? Ms. Marvel quickly became one of my favorite characters once I started reading her stuff, for several reasons. She is a pretty amazing kid. But don’t take my word for it, experience her for yourself! These are some of my favorites, but really any Kamala Khan comic book you pick up you are sure to love!

The all-new Ms. Marvel, the groundbreaking heroine that has become an international sensation! Kamala Khan is an ordinary girl from Jersey City – until she is suddenly empowered with extraordinary gifts. But who truly is the all-new Ms. Marvel? Teenager? Muslim? Inhuman? Find out as she takes the Marvel Universe by storm!

As Kamala discovers the dangers of her newfound powers, she unlocks a secret behind them as well. Is Kamala ready to wield these immense new gifts? Or will the weight of the legacy before her be too much to handle? Kamala has no idea either. But she’s comin’ for you, New York! It’s history in the making from acclaimed writer G. Willow Wilson (Air, Cairo) and beloved artist Adrian Alphona (Runaways)! Purchase.

Who is the Inventor, and what does he want with the all-new Ms. Marvel and all her friends? Maybe Wolverine can help! Kamala may be fan-girling out when her favorite (okay maybe Top Five) super hero shows up, but that won’t stop her from protecting her hometown. Then, Kamala crosses paths with Inhumanity for the first time – by meeting the royal dog, Lockjaw!

Every girl wants a puppy, but this one may be too much of a handful, even for a super hero with embiggening powers. But why is Lockjaw really with Kamala? As Ms. Marvel discovers more about her past, the Inventor continues to threaten her future. The fan-favorite, critically acclaimed, amazing new series continues as Kamala Khan proves why she’s the best (and most adorable) new super hero there is! Purchase.

Love is in the air in Jersey City as Valentine’s Day arrives! Kamala Khan may not be allowed to go to the school dance…but Ms. Marvel is! Well sort of – by crashing it attempting to capture Asgard’s most annoying trickster! Yup, it’s a special Valentine’s Day story featuring Marvel’s favorite charlatan, Loki! The fan favorite, critically-acclaimed, amazing new series continues as Kamala Khan proves why she’s the best (and most adorable) new super hero there is! Purchase.

She’s your new favorite. She’s everyone’s new favorite. And now she’s joining the big leagues. Look out world, Kamala Khan is officially an Avenger! But will being one of Earth’s Mightiest Heroes be everything she imagined? Or is life as a celebrity harder than she thought? But while saving the world is important, Jersey City still needs its protector too.

A development company that co-opted Ms. Marvel’s face for its project might well have more in mind for gentrification than just real estate. Can Kamala take down the evil suits destroying her home without ruining her personal life? Speaking of which, who exactly is that with Bruno? Get back on board and cling on, Kamala Korps, the ride is about to get wilder than ever! Purchase. 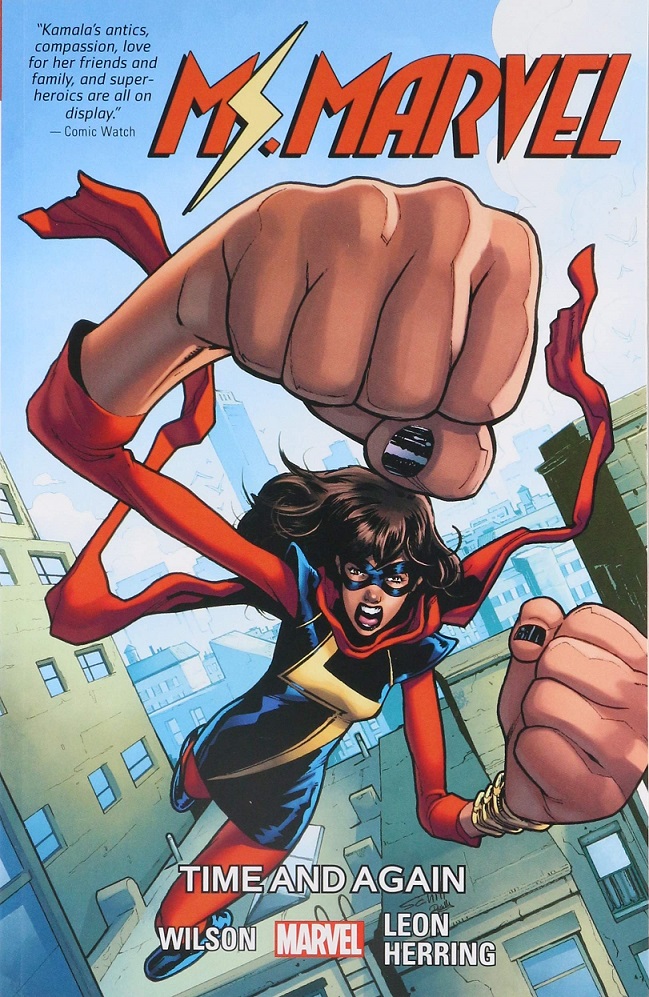 Kamala Khan continues to mix super-heroic adventure with fun and friendship! Starting with…a slumber party! But if calamity strikes Jersey City while Kamala is having a sleepover with Nakia, Zoe and Mike, how can Ms. Marvel save the day without bailing on her best friends? And speaking of BFFs, Bruno is back – and he and Kamala are learning how to be pals again.

What better bonding experience than geeking out over a little science? And what better experiment to run than trying to figure out how Ms. Marvel’s powers work? But when things go awry, Kamala is going to have to pull it together – and fight a classic Marvel villain! Purchase.