If you have been to any of my live YouTube chats, or had any kind of conversation with me, you probably know that I love me a villain. Especially a Disney villain. In fact, my left arm is being saved for a Disney Villains sleeve tattoo (which I cannot wait to get started on). So when I found out that Walt Disney World added a new after hours event – Villains After Hours at Magic Kingdom – I just knew I had to go! Thankfully, they invited me to attend the inaugural night – and here is what I thought about it.

While the event doesn’t technically start until 10 p.m., those attending can enter to park at 7 p.m. This is one of my major tips – get there as soon as you can and take full advantage! I have said this before when it comes to Mickey’s Not So Scary Halloween Party and Mickey’s Very Merry Christmas – and the same goes for this after hours event.

Disney certainly knows how to set the tone for everything – and doing that for Villains After Hours is no different. There is the perfect music playing, frightful lighting, and even the Maleficent fire-breathing dragon slinking about the park (her first time out at night!). They even had stations where you could get your face painted!

The way to my heart is Disney food. So when I was told there would be free snacks at this event, I was all about it! Of course, this includes ice cream, popcorn, and select bottled beverages. These are all available at carts placed around Magic Kingdom, but then Disney went ahead and tempted me with other special treats!

Here are all the villainous snacks and where to find them.

The Hades Nachos were tasty, but simple. I found them to be not as spicy as I would like, but I like things HOT. My friends had some and said they thought they were very spicy – so something to keep in mind.

The Maleficent Cone was interesting. I wasn’t sure about the flavor of the ice cream, but it did work when eating it with the cone. 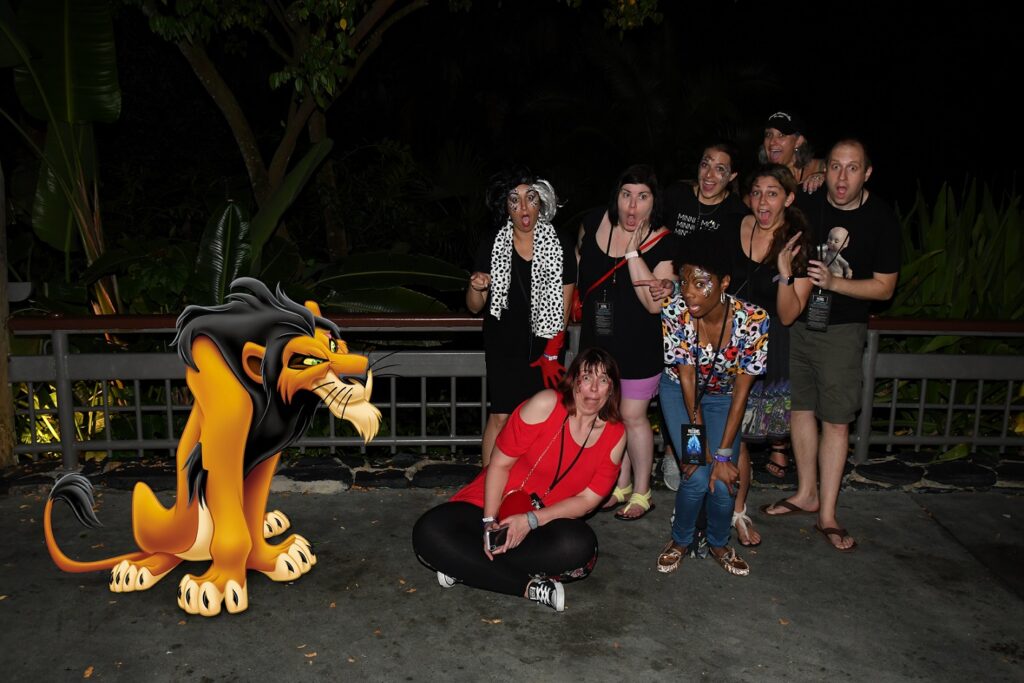 While villain character greetings are not a part of this event, there are still plenty of special photo opps that you will want to take advantage of. I have to admit, I was very curious as to what was going to be available because I love me a good photo opp!

There are four magic shots with villains available throughout the park.

There are many photopass photographers around to take your photos, so I highly recommend you taking advantage of that!

Walk on the Rides

With the limited amount of people that are allowed in the park after it closes at 10 p.m. you can pretty much walk on all the rides. The longest we waited to get on something was 5 minutes!

Most of the rides at Magic Kingdom are open during this exclusive event. You really should have no problem hitting everything, even with seeing the show. Especially if you head in to the park as soon as you are able to, at 7 p.m.

During Villains After Hours, both Space Mountain and Pirates of the Caribbean have villain inspired additions. The Pirates one is very similar to the overlay for Mickey’s Not So Scary Halloween Party – where there is a pirate outside as you wait, and one inside on the bridge. Honestly, nothing special there.

But the overlay from Space Mountain had everyone in my party saying that it would be worth the event ticket price itself. You ride in complete darkness to an insane new soundtrack. I have never screamed so much in my life. I know that ride, but I still had no idea what was going to happen next. It was INSANE.

I am going to admit something. I’m the type of person who sees a stage show once and then I don’t need to see it ever again. But I really thought what I saw of this show was fun. It features Hades, Meg, Jafar, Dr. Facilier, The Queen, and Maleficent – and it is a must see! It lasts a little longer than 20 minutes, so it doesn’t take up too much of your shopping, eating, and riding time – don’t worry!

I am a sucker for exclusive merchandise – and if includes Disney Villains as well, I have to have it! As a Disney Vacation Club member and Annual Passholder, I was hoping for some extra exclusive goodies to take home. Unfortunately, they didn’t have anything for DVC and AP – but I hope they will in the future.

While there is some new merchandise specific to the Villains After Hours event, there is also a lot of villains apparel and merchandise available that has been in the past. From clothing, to headbands, to mugs – there is a lot of things that you are going to want (at least I wanted it all!). 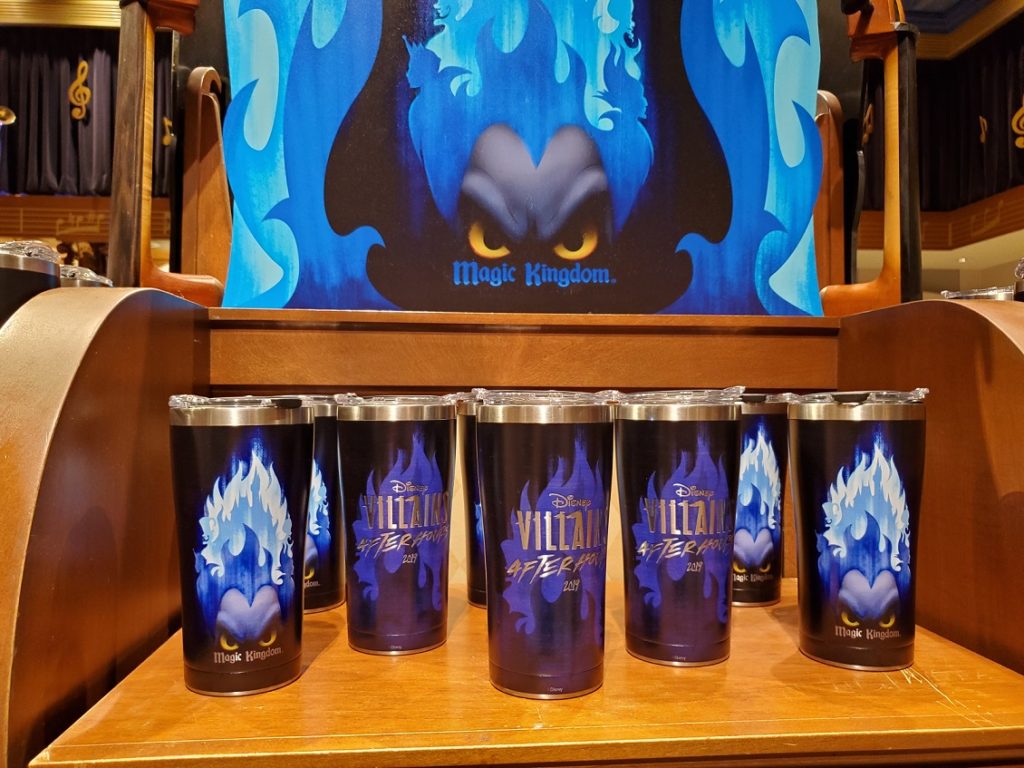 The event exclusives includes some really cool items featuring Hades. He seems to take center stage for most of this event – and I am not complaining. He is featured on a Villains After Hours 2019 hat, t-shirt, cellphone case, and a travel mug. They all have Hades iconic hair and piercing eyes. The logo is actually really cool, and easily one of my favorite Disney event logos.

If you are looking for something that includes all (or most) of your favorite villains, they have you covered. The t-shirts and tanks have eight of everyone’s favorite Disney Villains – Ursula, Cruella, Scar, Jafar, Maleficent, Dr. Facilier, Captain Hook, and Hades. That is basically the line up for my tattoo, so you know I wanted to grab that one! 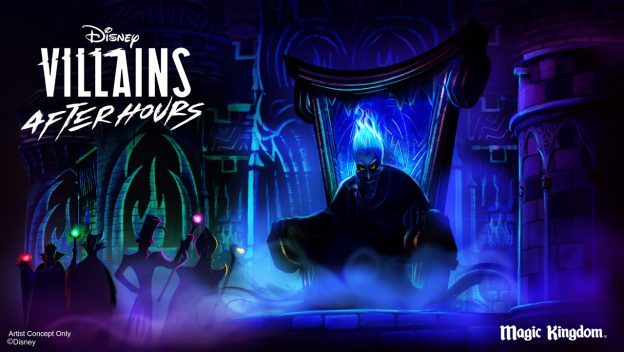 Attend Villains After Hours Yourself!

Trust me when I say this is a MUST DO event! I have been to many Walt Disney World parties, and this one ranks up at the top with my favorites. Event attendees can enter the park at 7 p.m., but it officially kicks off at 10 p.m. and ends at 1 a.m.

Here are the rest of the dates that Villains After Hours will be going on:

Disney Villains After Hours tickets cost $139 plus tax in advance, and $144 plus tax on the event night. However, if you are an Annual Passholder or Disney Vacation Club Member (I am guilty of both!), you will receive a $30 discount on event admission. That adds up quickly!

While I would have loved to see more villains – perhaps out and about walking the streets, this event is totally worth it if you want to walk right on all of your favorite rides and enjoy free snacks. Something we found out a little too late is that villains are always hanging out at the train station – and even interact with you!

You cannot take photos with them, but you can of them. We saw the wicked stepsisters, the Queen of Hearts, the Bowler Hat Guy, and the Big Bad Wolf!

Read more about Disney Villains After Hours at Magic Kingdom Park (and grab your tickets!).