When I first heard about HBO’s show Barry I was excited, but also nervous. I love me some Bill Hader but I was unsure of if he could pull off a darker, more serious character. I was used to him on Saturday Night Live (which is one of my favorite shows), but I was intrigued. Well, all my concerns went out the window after the first episode. The second season finale aired last night, and it has me begging for a third season.

If you have read my review of the Barry Season 2 premiere, you know I was excited about where the show could potentially go. I loved seeing a darker side of NoHo Hank, and it was interesting to see Barry’s internal struggle with what he did at the end of season one.

If you have not yet watched this show – binge it. NOW. Seriously. And stop reading unless you like spoilers, because I am about to dive in to the finale of Barry season 2.

WARNING: The following contains spoilers for the Barry Season 2 Finale. 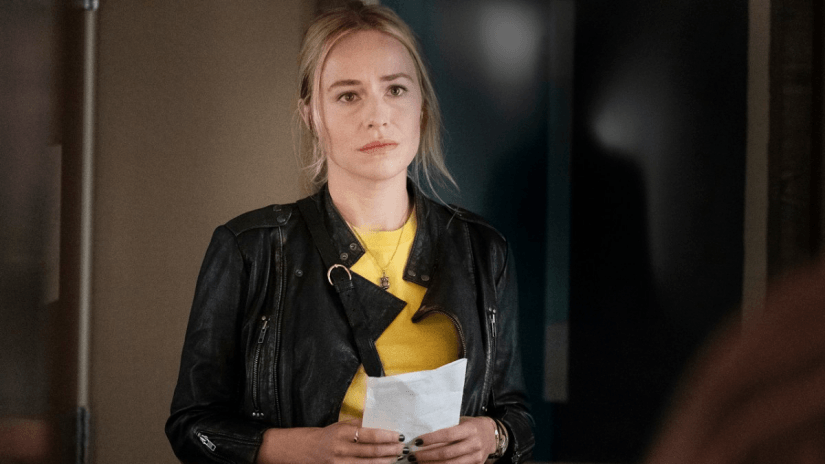 I have to admit, this part had me a little upset at first, but the more I thought about it, the more it made sense for Sally’s character.

The whole class was performing art pieces about their lives. Honest ones. In hers, she telling the story of her abusive husband. Originally it was a very powerful piece, showing that she kept taking him back after how he treated her.

But, while her and Barry are on stage, she flips the script. She gets in his face and says she is leaving him. Sally performed what she wished had actually happened, because she didn’t want the audience to think less of her.

This was the right move for her career wise as everyone comes up to her after the show talking about how amazing she was – and how proud and impressed they were that she stood up for herself.

The last episode had ended with Gene, finding Janice’s car (and body), thanks to Fuches. I was not sure where this was going to go – I thought for a minute that Fuches was going to kill him. And I think that was the plan. But he couldn’t follow through.

So the cops arrest Gene because, after all, he confessed to the murder (well Fuches did, pretending to be Gene). Fuches was mad at Barry for wanting to get out of the business – and this is how he decided to get pay back. Although, making Barry mad never really worked out for anyone, did it?

Fuches tells Barry he can easily save Gene – by confessing to the murder himself. Not an option for Barry. Instead, he plans to hunt down Fuches and kill him.

In the end, Gene gets let go because a pin was found that was clearly Chechen. So the police think that is who did it, and release him. But the very last scene is him sitting up in bed remembering something Fuches told him – “Barry did this.”

If that doesn’t have you excited for season 3, I don’t know what will.

Barry has been put under a lot of pressure this entire season. Not only was he having to deal with killing Janice, he was going through a lot with Sally and NoHo Hank. It seems like the more he tries to get out of the killing business, the more he gets sucked in to it.

In the end, the pressure was too much and he just snapped. Once Sally slapped him on stage he stormed out – to go after Fuches. NoHo Hank had texted him letting him know that Fuches was there – and had helped solve the problems he was having with his partners.

Barry goes in to the house guns blazing. And I mean blazing. It is obvious he just saw red – and blacked out. He kills basically every one. The guys he has been working with all season? Dead. The kid that was like his prodigy and looked up to him? Dead.

Eventually Barry snaps out of it, and I think he feels really bad. I cannot even imagine what he is going to be going through in Season 3. Because he was struggling hard enough this season after how the last one ended….

My overall thoughts on this finale? Explosive. Poweful. Kind of perfect. On the entire season? They blew it out of the park. Barry is easily the best dark comedy on television right now.

I am looking forward to seeing what Sally does with her newfound fame. Will she crumble and admit the truth? Or use it to get bigger and better roles? I am guessing the later – and she will struggle with the decision she made.

What will happen to NoHo Hank now that his boss has arrived and pretty much all of his men are dead? Will he continue to trust Barry or is this the final straw that will break their friendship?

What will happen with Barry? Is he going to have a mental breakdown after realizing what he did? Will he turn himself in? Will he try to pass it off like he did this because of what they did to Janice (even though we know they didn’t)?

And perhaps most importantly, what will Gene think of Barry now? Will he confront him? Will he believe Fuches? And what will this do to Barry – to lose the father figure that Gene is to him?

So many questions that have me itching for season 3!

What did you think of the Barry Season 2 finale?

Why IT Chapter Two Made Me Cry (More Than Once)! | Mama's Geeky

[…] Two was perfectly cast. The adult actors cast for their children counterparts were so on point. Bill Hader probably being my favorite. With James Ransone being a close […]