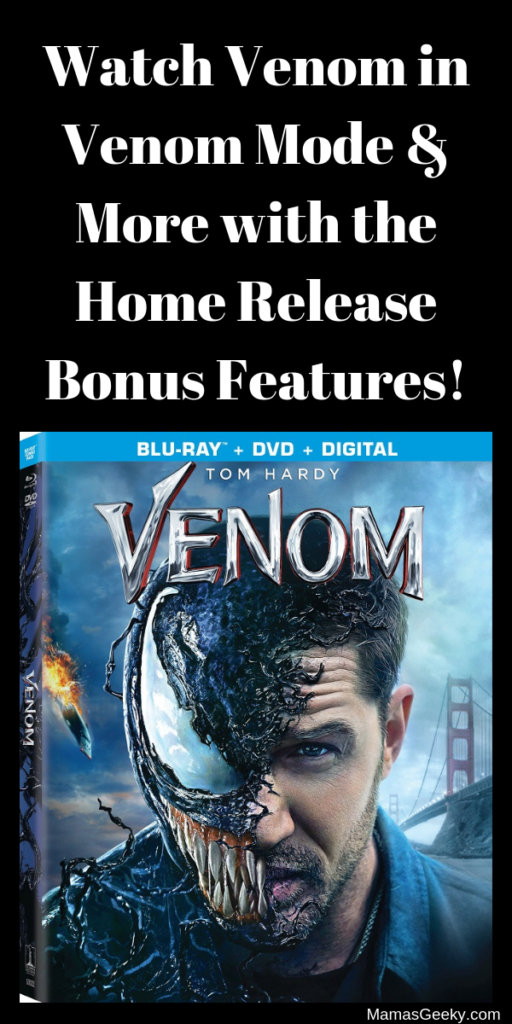 When I first heard about Venom coming to the big screen, I was thrilled. He has always been one of my favorite Marvel characters. Then as the trailers were releasing, I admit, I had mixed feelings. The final trailer put my concerns to rest and I headed to the theaters to see this movie. Boy, am I glad I did, because I loved it! I think that Venom is a must see for any Marvel comic book fan! I was thrilled when a copy showed up at my doorstep – and you know I had to immediately check out the bonus features!

My favorite thing about picking up a movie on home release is all the bonus features. I feel like the deleted scenes always bring the movie to another place for me – and often tie things together more. But for Venom, what I was most excited about was Venom mode! I love Easter Eggs and having Venom point them out for me – even better. I have read many Venom comics but there were a couple of references I missed. This is a MUST WATCH mode for Venom fans!

Watching Venom for a second time, everything really held up for me. I know there have been some mixed reviews out there, but for me, I think I enjoyed it even more. All of the comic book nods really brought this film home for me. It is so much fun and I cannot wait to see more. Carnage is going to be amazing!

Pick up your copy of Venom on December 18th!

I would like to thank you for sponsoring this really great giveaway, and for giving us all a chance.

I’m here for my daily entry and to wish everyone a safe and Happy New Year ?????See you next years!!

This looks like a movie my husband would really enjoy

Thanks for the review/ giveaway, sounds action packed. My teenage son loves all those extra easter egg bits!