Thank you to Disney for sending me out to LA for the Ralph Breaks the Internet Event! All opinions expressed are 100% my own. 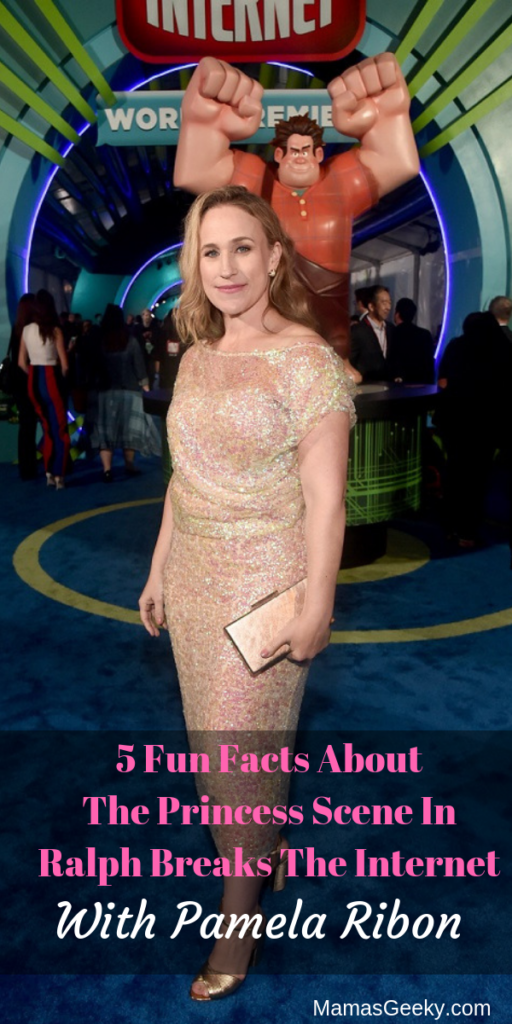 During the Ralph Breaks The Internet event we were all lucky enough to sit down with Pamela Ribon. If you don’t know who she is – you should. Not only is she a brilliant mind, but she is so much fun. Pamela totally used to be a blogger too, so you know we all bonded. Well, she co-wrote Ralph Breaks The Internet, and even voices Snow White. She is the one responsible for the AMAZING Disney Princess scene, and she let us in on all the details of it’s creation. Oh, and we all cried together over women empowerment.

All The Original Voices of the Princesses

Well. Almost. You have to remember some of these films were made quite a while ago. The voice of Snow White has passed, and Pamela herself actually took over for her in this role. Jennifer Hale, who is a really famous voice actress, has stepped in for Cinderella, and Kate Higgins voices Aurora. Other than that, we have all the originals – Irene Bedard, Linda Larkin, Paige O’Hara – the list goes on. It is so cool to see (and hear) them all together.

Check out this amazing Oh My Disney app castle toy!

Oh My Disney! Was Thrilled

Pamela told us that when Oh My Disney! was asked to be a part Ralph Breaks The Internet, they were thrilled! She joked that they said “They like us, they really like us!“. But seriously, they are a really great fit for this movie as they as a major Disney website. I have subscribed to them for years! There are many, many Easter Eggs in the Oh My Disney scenes, so keep those eyes peeled! I can understand their excitement to be included because if Marvel wanted to somehow add in a Mama’s Geeky reference to one of the films, you know I would be over the moon about it!

The Voice Actresses Added To Their Characters

Of course these actresses have been voicing these characters for years and years! I mean, they ARE the Princesses. Pamela let us know that each and every voice actress added to the script and the scene. They know what their characters are like – the things they would and wouldn’t say. For example, Pamela let us know that one of the actresses told her that her character would not use contractions when speaking. It is things like that some people might not even realize or pick up on, but when you have been that character for years, you just know it. Pamela added, “Some of it is just who they are now – and that is surreal. You feel like you are meeting two people at the same time.”

There Is A Lot of Honesty In This Scene

Disney Princesses have gotten a lot of flack over the years. I think this scene nails it when they ask “Does everybody assume all your problems were solved because a big strong man showed up?” I am raising two daughters, as you probably know, and that is not the mentality I want them to have. However, I love Disney, and always will. Movies were made in different times and I don’t think it is necessarily a bad thing. I do love that Disney is OK with….poking fun at itself though. And having all the Princesses together to interact with each other is just what we all needed.

“I am so thrilled that people are actually going to see it now,” Pamela told us. “When you try to explain it people can’t grasp what it really is like. It’s got a lot going on. What they are saying, and why they are saying it, and who they are saying it to.” If you keep your eyes and ears open, you will notice that the Princesses are doing a lot for each other in this “backstage moment“. It is loving and sweet, but also honest about how women are when they are helping each other out. I don’t want to give much more away, but just pay attention.

This Scene Was Risky

If I were Pamela, I would have been nervous pitching this idea too. Having seen it, I am SO excited that it all worked out. “My hope is that [this scene]is entertaining, and that’s the risky part. Is the Studio ready to talk about itself this way? Working on [Frozen and Moana] and watching the studio embrace Princesses, and be ready to talk about them in a modern way — what does it mean to be a Disney Princess?” Pamela explained to us. She then went on to talk about being a mother and a feminist, and that she hopes the audience understands and appreciates what she is bringing to the table with this scene. I know I sure do. It has a lot that needed to be said, and was said in a perfectly funny and witty way, in my opinion.

“A relationship can’t grow if we don’t talk to each other when it’s hard.” That is what Pamela had to say about Ralph and Vanellope’s relationship. I know I promised you guys fun facts about the Disney Princess scene, which I gave you, but I wanted to throw this little bit in too. In Ralph Breaks The Internet, we get a lot of heart along with the humor. Bring the tissues guys. I loved seeing this side of Ralph and Vanellope – and I think it is important that we do.

About Ralph Breaks The Internet

In “Ralph Breaks the Internet,” video-game bad guy Ralph and best friend Vanellope von Schweetz leave the comforts of Litwak’s arcade in an attempt to save her game, Sugar Rush. Their quest takes them to the vast, uncharted world of the internet where they rely on the citizens of the internet – the Netizens – to help navigate their way. Lending a virtual hand are Yesss, the head algorithm and the heart and soul of the trend-making site “BuzzzTube,” and Shank, a tough-as-nails driver from a gritty online auto-racing game called Slaughter Race, a place Vanellope wholeheartedly embraces – so much so that Ralph worries he may lose the only friend he’s ever had.