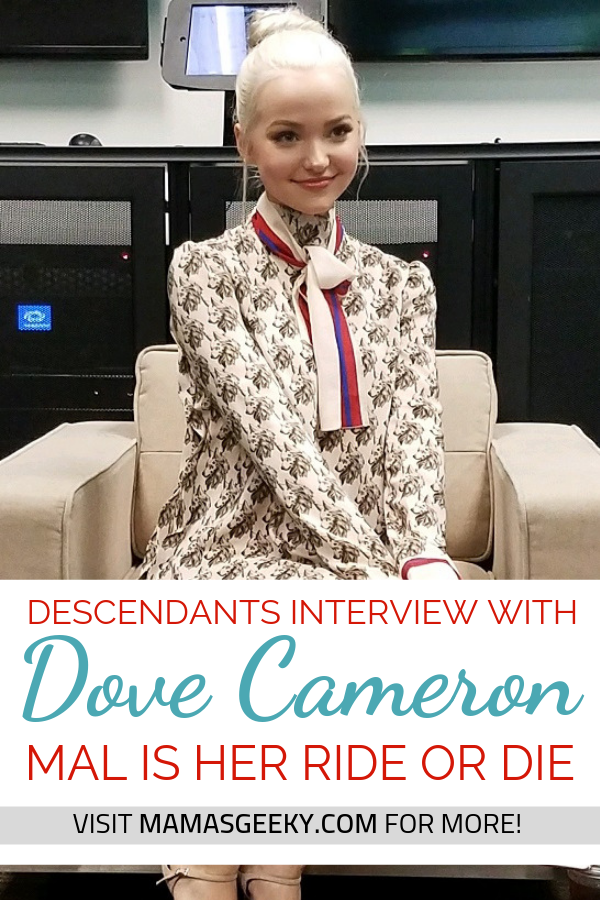 When in LA recently I was lucky enough to talk with Dove Cameron, who plays Mal in Descendants and Descendants 2. She was beyond sweet and I just loved our time with her. Speaking with her, I could tell how much she loves playing Mal and how much the character means to her. She is one of the few actresses that my young girls really look up to, and having met her, I can say I am very thankful of that.

How Mal Has Changed

From what we had seen of Descendants 2, we could tell something was different about Mal. She was not the same as we left her at the end of Descendants. We asked Dove about this, and I just loved her response. “Kenny, the writers, and myself all threw [strict notions of Mal’s character]out the window because she, as a human does, goes through life changes and experiences. She never had anyone growing up and she couldn’t ever really find her footing with the one person that she did have to rely on [her mother, Malificent]. So she learned to rely on herself.”

Taking From Her Experiences

Since Mal went through so many challenges and changes, we asked Dove if she pulled from her own experiences while filming. “As an actor, I do that as much as I can in every role, but Mal is my ride or die. I fell in love with her when I read the ‘Descendants’ script back in 2013. [Disney Channel] didn’t tell me anything. They didn’t say, ‘We’re going to set up an audition.’ It was more like, ‘Will you read this and tell us what you think?’ I had an emotional, visceral response. I said, ‘She’s my girl!’ because I related to her so much.”

“Even though all of the characters and Mal are in fantastical circumstances, their experiences are very relatable. A lot of people don’t always have an easy home situation. They don’t always have all the support that they deserve. I think all of us in this room can relate to feeling like we lacked something there that we now have to deal with as we’ve gotten older. That was something that I had such a lovely time with, for myself psychologically and also as an actor, to inject pain into an experience that we [all share].”

“This is a movie for children, and so we have to ride that line between [communicating]really helpful and relatable messages, but still keeping it light. That was challenging and interesting for me. I did bring a lot of things I felt like I lacked from my own childhood. It definitely helped keep Mal real. It also helped me as a human to explore somebody else’s issues, and to fix my own at the same time.”

Descendants is extremely popular with young kids, so these actors are all an inspiration to them. We asked Dove what she wants kids to walk away with after seeing Descendants 2. “What’s beautiful about having such a broad cast of characters is that we all have our really unique storylines. One of my favorite storylines actually isn’t my own, it’s Lonnie’s, and you’ll see that when the movie comes. She has this beautiful, empowering message for girls that gets me every time I see the movie. I want to say, “Yes! Lonnie!” I’m being serious. I’m being campy, but it’s so real. In terms of the whole movie, there’s a beautiful synergy between the fact that the whole cast has been having this yearlong love affair with each other. We’re so there for each other in a sibling-like, familial way and it translates to the film.”

“It projects a message of togetherness, of banding together, of supporting people that you love. That sounds like such a simple concept, but when you’re absorbing things as a kid, separatism is such a thing. We’re encouraged to be our own island. Especially with things like social media, we all have our own brand and image, and that’s what’s taught. I think that it’s so beautiful to rely on and trust people. If you hand someone your whole heart, they’re much more delicate with it. So I do believe in trusting the world around you, and I do believe in kids learning to rely on each other and their surroundings and the world in general. It’s just a really empowering story. There’s not one character that doesn’t go through some weird arc where they’re much more fully formed and healthy. So [the overarching messages would be the importance of]help, togetherness, support [and]trust.”

A Much Bigger Set

We saw a few scenes from the movie, and learned later that some of it was CGI and we would have never know. We asked Dove how it was working with such a big set this time around. “Intoxicating. Because there wasn’t water, but when I watch it back, I think ‘Was there water?’ It was amazing. While we did not have water, the ship was real. I have no idea how [the set decorators]did it. Our set decorators turned out for this one.”

“I remember seeing the concept and thinking, ‘There’s no way it’s going to look like that.’ They outdid themselves. Being on the actual set was safe, but it didn’t look safe – we were all sword fighting. Nobody would ever notice, but I’m a pipsqueak. I’m so tall and in the film, I am wearing shoes that are one inch short of being stilts. My shoes are this big, and I’m sword fighting in them. There are stairs and wood and railings. It helped me so much because it’s so fun being physical. As an actor, it’s exactly what you want. You want to feel lost in it. It’s like opening up your favorite book and then being able to jump into it. People are saying, ‘Oh, be careful.’ You’re thinking, ‘I know. Let me do my thing.’ So yeah, it was an amazing thing. It definitely helps. All of the sets were real minus things like the water and some special effects.”

The story deepens in the music-driven sequel to the global smash hit “Descendants,” as the teenage sons and daughters of Disney’s most infamous villains – Mal, Evie, Carlos and Jay (also known as Villain Kids or VKs) – try to find their place in idyllic Auradon. When the pressure to be royally perfect becomes too much for Mal, she returns to her rotten roots on the Isle of the Lost where her archenemy Uma, the daughter of Ursula, has taken her spot as self-proclaimed queen of the run-down town. Uma, still resentful over not being selected by Ben to go to Auradon Prep with the other Villain Kids, stirs her pirate gang including Captain Hook’s son Harry and Gaston’s son Gil, to break the barrier between the Isle of the Lost and Auradon, and unleash all the villains imprisoned on the Isle, once and for all.