DC’s Titans Season 3 Episode 3 is titled Hank and Dove because it focuses on these two a lot — but we also dive more into Red Hood.

DC’s Titans Season 3 has it’s sights set on being the best season yet, and episode 3 just took it to a whole new level. There is so much to love about this episode as fans get to five into Hank and Dawn’s relationship a bit more, hence the title of episode. However, there is also a lot more of Red Hood too, and some unexpected things happen — especially at the end. This is hands down the best episode of the season yet.

Warning: Spoilers Ahead for Titans Season 3 Episode 3
Hank and Dove

The episode opens up with Dick Grayson digging up Jason Todd’s grave to see if his body is there. Shocker, it isn’t. As he is doing so, fans get some really great flashbacks to their fight and the reveal of Red Hood’s identity that was at the end of the previous episode. Dick is then explaining it all to the Titans, who are trying to figure out who helped Jason come back to life. Of course, Starfire suggests that perhaps this person can bring Donna back.

The team is unsure what to do about Jason, for the most part. They all care about it, but Hank says in his mind, they just need to forget he is Jason and take him out because he is a clear threat. Dawn is very upset by this, and it starts a fight between the ex-lovers.

Hank’s phone rings and it is Jason, who seems to be on the floor of some abandoned building. He is crying and telling Hank that he doesn’t know what is happening to him and he wants help. He didn’t know who else to turn to and doesn’t trust Dick.

Hank offers to help him, which fans know is not what he plans to do if he stays true to the conversation he just had. Jason then leads Hank all around town. First to somewhere to break his phone, then to a closed down gym where he makes him strip naked and swim in a pool to prove he has no wires on him. As Hank gets to the end of the pool, Jason as Red Hood knocks him out.

Hank then returns to the Titans with a bomb in his chest. It turns out Jason was messing with him the whole time, of course, and now he only has a set number of heartbeats left until it explodes. There is no way to remove it without causing some serious damage and setting it off. The insertion mechanism was meant for insertion only, there are barbs on it that would kill Hank if removed.

Jason calls Dick and gives him the demands. He wants the Titans to rob a gold bar delivery, $50 million to be exact, and turn it in to him. If they do, he will deactivate the bomb. If not, Hank dies. Of course it isn’t about the money, the point is to put on a show and of course, to make the Titans do something they really do not want to do.

The team decides to put Hank on a beta blocker drip to slow his heart down. As Dawn takes care of him the two talk and reconnect – they even kiss. She decides to do whatever she can to make sure that he stays alive as she now realizes just how much she still loves him.

Finding Out How Jason Came Back

Dick goes to see Scarecrow to ask his opinion of things. Scarecrow agrees that Jason could not be working alone, and that this must stem from some daddy issues that he has. He has likely found a new mentor to fill that daddy figure sized hole. My best guess is still Scarecrow, as that seems to fit the best.

At the same time, Starfire goes to Barbara and they take a look at the morgue cameras. There was someone who wheeled the body out and was gone for four minutes before coming back in. The body could have easily been removed or replaced. They get a good look at the face, and Dick goes to find him. However, when he pulls up, the body is dropped from the building by Red Hood.

Up To Superboy To Save The Day

After looking through many databases to find the schematics of the tech used to create the bomb in Hank’s chest, the Titans realize it must be Waynetech. They are right and get a hit! This is a weapon that Bruce created and even had patented. Superboy speed reads through the manual and is tasked with creating a deactivation device in less than 3 hours to save Hank. He begins working on it, and they stress that he must get a 0% fail rate on his test in order to use it.

Dove has decided that she will rob the delivery if it means saving Hank. When she does this and brings the gold bars to the location given to her by Jason, he shows just how cruel he is. He leaves a gun for her, telling her to shoot him, and then the device will be deactivated as his hand lets go of the device he is holding. She is about to and the Dick shows up.

The two fight for a little bit while we see Superboy getting closer and closer to that 0%. Finally Dove gets the gun, just as Superboy gets to 0%. He is rushing to get to Hank, who has just seconds left to live. At the same time Dove pulls the trigger on the gun which turns out to be the detonator — she just killed hank. He explodes as Superboy is just about to enter the room. Red Hood says oops, and disappears.

DC’s Titans Season 3 Episode 3 is amazing for so many reasons. Of course it is sad to see Hank go, but WOW, what a way to go out. This is sure to have a massive impact on the Titans going forward. Dawn is going to blame herself for a while, as she should. It is superhero 101 to never trust the bad guy.

This episode roved just how formidable Jason Todd as Red Hood is, and he is constantly giving me chills. What an incredible villain. There wasn’t as much action, but this was the necessary emotional goodbye to Hank that fans needed. I cannot wait to see what happens next.

Time is running out for one of the Titans. 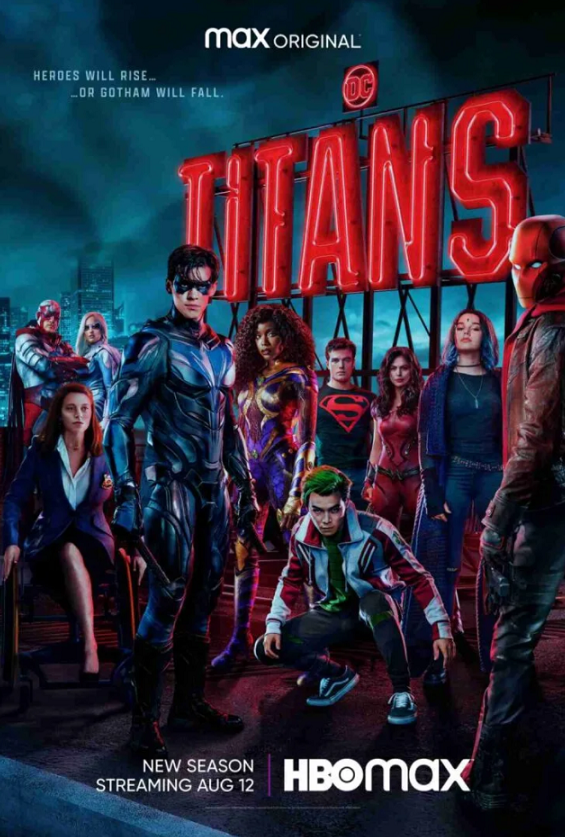 Titans follows young heroes from across the DC Universe as they come of age and find where they belong. In season three, circumstances draw our heroes to Gotham City, where they will reunite with old friends and face new threats.

Titans Season 3 kicks off on HBO Max with Episodes 1 – 3 dropping on August 12th!

[…] to see the inventor of the device. Good thing too because she is tied up with that same bomb that Hank had in his chest and has just 60 heartbeats left until she explodes. Conner is there and quickly creates the […]