The Mandalorian Season 2 Episode 7 is for sure a filler episode, but it is a fun filler with lots of action and sets up for what is sure to be an EPIC season finale.

The Mandalorian Season 2 Episode 7, titled “The Believer”, is definitely a filler episode, but it is a good one. Yes, it is one of the weaker episodes of the season, however, there are a lot of amazing things in it. Tons of action, some great surprised, and some fantastic Slave One moments.

Here is my recap and review of The Mandalorian Season 2 Episode 7 — but be warned, major spoilers ahead.

Warning: SPOILERS for The Mandalorian Season 2 Episode 7
“The Believer” 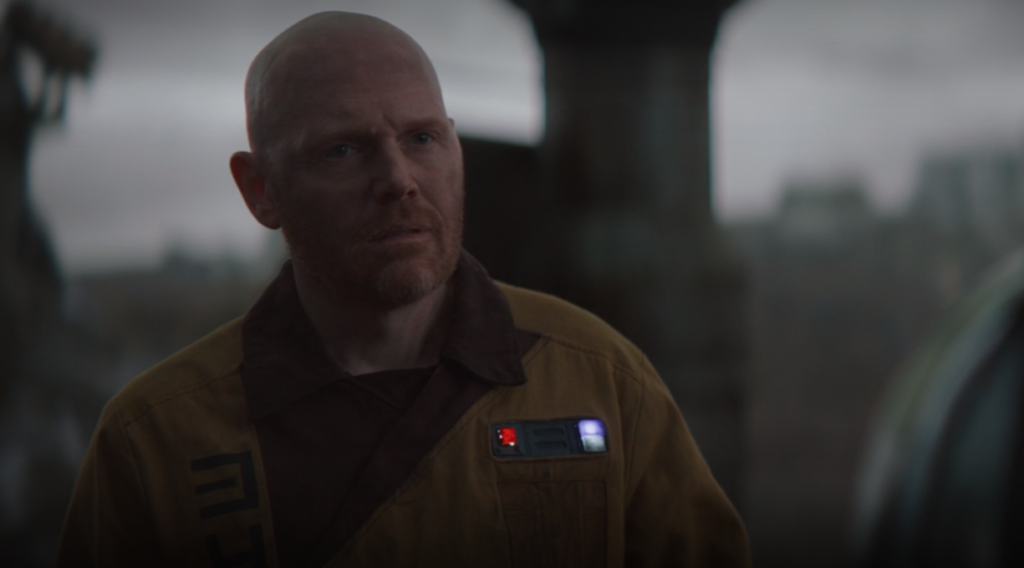 Marshal Cara Dune releases Mayfield to help locate Moff Giddeon’s cruiser. They tell him he will not be pardoned, but will get a “better view”. Boba’s armor got cleaned up

Mayfield says they need access to an internal Imperial terminal in order to get the coordinates, and there is one on Morak where there is a secret Imperial mining hub for rhydomium. Boba, Cara Dune, Fennec, Mayfield, and Mando land on Morak in the Slave One. Mayfeield tells them the base has scanners and if your genetic signature shows up on any New Republic register, you will be detected.

So it is determined that Mayfield and Din will go — but Din cannot be wearing his Mandalorian armor. He still won’t show his face though — as they swap out for troopers.  Along the way there is a pretty epic battle with pirates who are trying to blow up their transports with thermal detonators, since ryhdomium is very volatile.

However, they make it to the base and then Tie Fighters and Stormtroopers show up to save them. This scene is the best because Mando is out of ammo and literally standing there with his fists up like “let’s do this thing”.

When they get inside, Mayfield does not want to risk accessing the internal Imperial terminal because he sees his old commanding officer, Valin Hess, in the room. Din says that he will access it, but there is a facial scanner. This is where it gets insane because he removes his helmet for the scan, and since Hess approaches him — he leaves it off for like 6 minutes.

When Hess approaches, he asks Din for his TK number, Mayfield saves the day coming in and saying he is his commanding officer and gives both their “TK numbers” to Hess. He also says that Din is hard of hearing and he will have to speak up for him. Hess tells them they are the only transport to arrive and he wants to have a drink with them.

Mayfield decides he needs to get something off his chest and brings up that Operation: Cinder, where Hess killed a lot of innocent people on both sides on the planet Burnin Konn. He then shoots Hess starting a bit of a fight. Din puts his helmet back on and they fight there way out, and are picked up by Slave One on the roof.

Slave One Has Its Moment

Mayfield then sharp shoots the transport with rhydonium in it, and explodes the whole base. Tie Fighters come after them though, but don’t worry, Boba has it covered. Slave One takes care of the Tie Fighters with a seismic charge (amazing). Cara and Mando say how it is a bummer that Mayfield died in the blast — indicating that they are letting him go. Mayfield walks off — I hope we see him again.

Mando sends a threatening message to Moff Gideon stating that Grogu means more to him than he will ever know and that soon he will be back with him.

I feel like this episode is most definitely a filler episode, however it was packed with enough action (and a ton of Slave One) that I didn’t mind. Boba’s armor being so clean totally threw me off every time I saw him though.

The Mandalorian Season 2 Episode 7 is setting up what is sure to be an epic finale. I love the cryptic message that Mando sent to Moff Gideon and I cannot wait to see them go toe to toe next episode, because you know they will!

I also think that the end of the next episode will have a Jedi showing up to train Grogu — who could it be?

Check out my favorite quotes from The Mandalorian Season 2.