The first full trailer for Marvel’s WandaVision is here and it is worthy of a breakdown because it revealed so much! Coming to Disney+ soon!

As a huge Marvel fan I am, of course, looking forward to all of the Marvel shows coming to Disney+, however, WandaVision has been at the top of my list. I love me some Wanda and I think that she is really not showcased enough in the MCU. She is INSANELY powerful — proven in one of my favorite comic book storylines, House Of M.

I have been speculating for a while now that this series just might bring House of M into the MCU. It is how we get her children, Wiccan and Speed, which helps set up the Young Avengers. If you know me then you know I have my fingers crossed for a Young Avengers movie (or several) eventually.

During the Emmy’s we got the first full trailer for Marvel’s WandaVision, which is coming to Disney+ later this year, and in this breakdown article, I am going to point out some things you might have missed. If I missed anything, please, let me know!

As a fan of the comic books I am kind of obsessed with the fact that this trailer for WandaVision shows them in their OG costumes from the comics! Since they are going the sitcom route (which is likely inside Wanda’s warped reality), these are their Halloween costumes.

I am so here for this reference! I love it. It is perfect and I know that other fans of the comics must feel the same way. To see Wanda and Vision in their original old school costumes is just… well… amazing.

Read this wine bottle. Mansion Du Mepris. House of Misery – House of M. Does this mean we are gettig a House of M storyline? In this show? In the future? Or is it simply a nod to one of the best comic book runs ever? I guess we will have to wait and see. 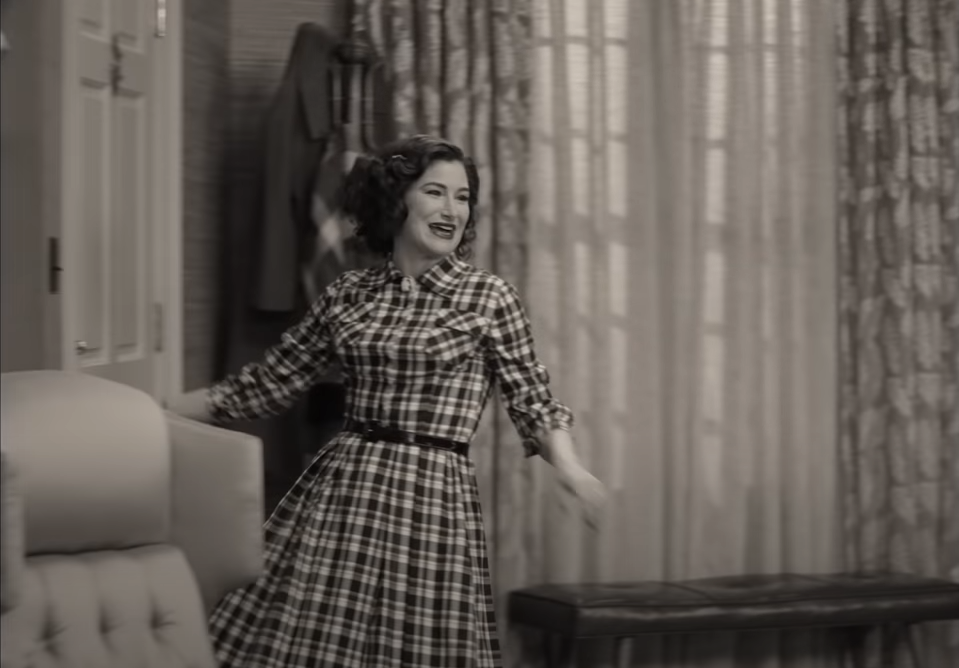 Of course there is no official news on Katherine Hahn’s character, but everyone on the internet is speculating she could be Agatha Harkness and honestly, I have to agree. Especially with the mention of her knowing that Vision is dead in the trailer. The conversation goes:

Hahn: Am I dead?
Bettany: No! Why would you think that?
Hahn: Because you are.

If you don’t know her from the comics, let me briefly explain. Agatha trained Wanda as with. A REAL witch. Wanda uses that energy to make herself pregnant. With twins. Yeah, super weird. I know. Then Mephisto gets involved and it’s a whole thing, but, let’s ignore that bit for now.

Either way, I think Hahn could totally be playing Agatha, since they have a connection in the comics. Which makes me think this town might be New Salem from the comics, which is home to witches, warlocks, and wizards.

They are mutant children and Speed has the abilities of his Uncle, Quicksilver. Wiccan has those of his mother, Wanda. They end up a part of the Young Avengers. Wiccan dated Hulkling and they are one of my favorite comic book couples — so I hope this brings them into the MCU.

I talk a bit about Monica Rambeau in this article, but in this WandaVision trailer we get the adult version of her and I am super excited about it! It is assumed she is linked to SWORD (Sentient World Observation and Response Department) thanks to some set photos where she is wearing a badge with the SWORD logo. I have a feeling she is entering this reality so that she can stop Wanda from making it everyone’s reality. Again, Wanda is insanely powerful. And she can do this very easily.

Losing Her Grip On Reality

As things change from Black and white to color, it seems like Wanda is losing more of a grip on reality. She is getting deeper into her fantasy, which cannot be a good thing for the real world. Because she can make her reality the real one. The actual world.

I have said over and over how powerful Wanda is. And she is. The House of M storyline proves that. I imagine someone is going to be trying to stop her from making this an actual reality. Which makes sense why Monica and SWORD (Sentient World Observation and Response Department) are involved.

WandaVision is “coming soon” to Disney+!