After watching I’m Thinking Of Ending Things movie I knew I was going to need to read the book to clarify the ending. While still vague, I am glad I did!

I’m Thinking Of Ending Things is a unique story that will leave many people scratching their heads trying to figure out what they just watched. After seeing the movie I had my suspicions, but still wasn’t one hundred percent sure of the big “reveal”. It was a little too off the wall for me to completely understand. So I went ahead and ordered myself the book version of I’m Thinking Of Ending Things, after several of my YouTube Channel subscribers suggested it to me.

While still a bit vague, there was a lot of clarification in it. While there are several differences between the two, the major ones come at the end. The ending was much better in the book than the film — which is often the case, isn’t it? I am so glad that I read it because it makes me appreciate the movie that much more. 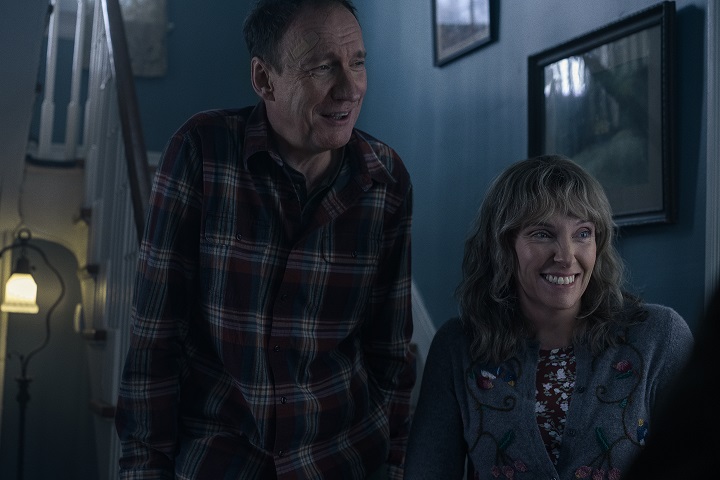 The end of I’m Thinking Of Ending Things is very weird and confusing. The Young Woman and Jake have arrived at the school that we have been seeing throughout the movie. It is to be assumed that the janitor is Jake, which I had guessed earlier, but they don’t really ever confirm that. Especially since they use a different actor to play him.

The Young Woman admits that she can barely remember Jake, and for sure cannot describe him. Then we see a very strange dance number. Again, with two completely different actors than the ones we have been watching this whole movie. They play out someone being killed, but really, it all makes no sense.

Then the janitor ends up in his truck, gasping for breath. He imagines a cartoon pig, one that is being eaten by maggots (much like the story he told earlier). He strips himself naked and walks in to the school, and then into, what we imagine, is death. We then see Jake up on stage reciting a speech as everyone applauds him.

The book is completely different from the point where they get to the school, and I honestly prefer that ending a lot. 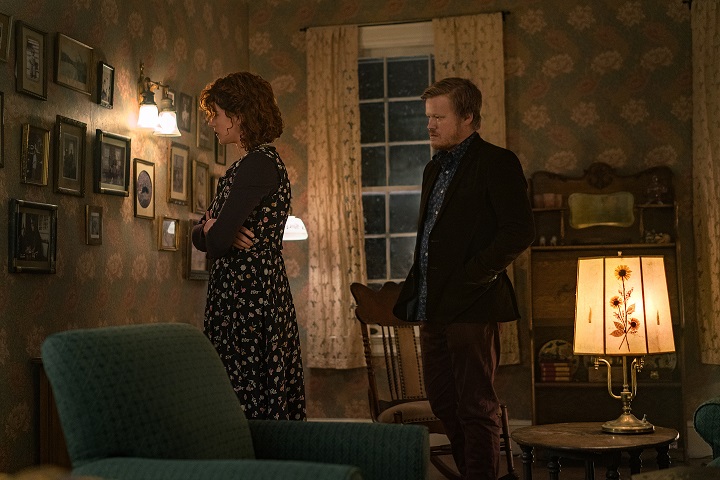 One The Young Woman and Jake arrive at the school it becomes extremely obvious that they are the same person. Yes, they hint at it early on (in both the book and movie) but this ending gives us confirmation, where the movie ending does not.

When they arrive at the school, The Young Woman looks at the portrait she was given by Jake’s mother. It is supposed to be of Jake when he was younger, but she now realizes it is her. And well, that they two of them are the same person for sure. In the movie, and even the trailer, we see this photo but they don’t do much with it after that scene.

The Young Woman discovers that she is a figment of Jake’s imagination. Old Jake, who is confirmed to be the Janitor in the book, appears and hands her a clothes hanger. She then stabs herself in the neck, which kills them both.

This ending was likely changed and replaced by a dance with ribbons dignifying the blood because it is so violent. But honestly, I like the clarification better. Which ending do you prefer?

About I’m Thinking Of Ending Things

Nothing is as it seems when a woman experiencing misgivings about her new boyfriend joins him on a road trip to meet his parents at their remote farm. Despite second thoughts about their relationship, a young woman (Jessie Buckley) takes a road trip with her new boyfriend (Jesse Plemons) to his family farm. Trapped at the farm during a snowstorm with Jake’s mother (Toni Collette) and father (David Thewlis), the young woman begins to question the nature of everything she knew or understood about her boyfriend, herself, and the world.

From Academy Award winner Charlie Kaufman (Eternal Sunshine of the Spotless Mind) and based on Iain Reid’s acclaimed novel.