Readers of The Umbrella Academy comic books already know that there are many differences in the Netflix show — same goes for Season Two.

If you have read the comic books you know that the siblings don’t often go by their actual names. The following are their nicknames, which honestly, I kind of love. 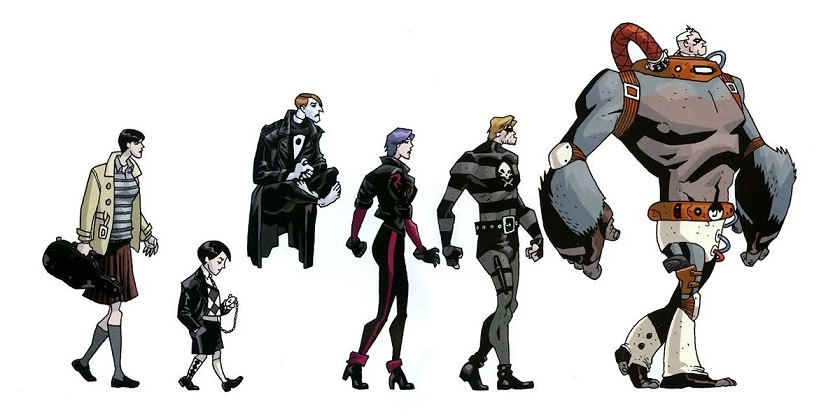 Pick up your copies of The Umbrella Academy comics because trust me, they are really worth a read even if you have watched the show. They are similar, but different. And yes, I appreciate both for what they are.

There are several differences that fans of the comic books picked up while watching the first season of the Netflix show. As a fan of the comics, I enjoyed both versions. Now, after watching the second season, there were so many more changes.

What did I like about this? That I did not see most of it coming. I know a lot of people are loyal to the comic books and despise changes, but I really don’t mind them. Actually, I enjoy them. How boring would it be to go into a movie or television show and know the ending already?

The characters of Cha-Cha and Hazel are actually quite different in the comic books. They don’t even show up until Dallas (season two), which is very different than the Netflix show. I personally liked getting to know them more in the first season of the show, then for just a handful of pages in the second volume of the comics.

A notable difference is that in the comics they are both male. And Hazel never falls in love with the donut shop worker. I think I like the show version of them better. Although, they are still pretty badass in the comic books taking out Klaus and Luther.

We only see Hazel for a brief moment in the first episode of The Umbrella Academy season two episode one, and we don’t see Cha-Cha at all. Of course.

Five Doesn’t Bring Them Back In Time

At the very end of The Umbrella Academy season one, Five jumps the whole family back in time. He goes just a little too far, and the siblings end up scattered throughout time, but each of them in Dallas. This article will explain more of where The Umbrella Academy is now. When Five arrives he realizes that they did it again. He witnesses another apocalypse and Hazel saves him just in the nick of time.

This doesn’t happen at all in the comics, although some of the family jumps back to 1963, this is at the will of the commission (called the Temps Aeternalis in the comics). They are trying to make sure the JFK is murdered to restore the correct timeline and need The Umbrella Academy’s help to do so.

The Way Allison Regains Her Voice

In the Netflix show, Allison ends up gaining the use of her voice again after a few months. If you remember, in season one Vanya slit her throat and vocal chords. In the comic books, Vanya still slit her throat, but the doctors said she would never speak again. This doesn’t fair well for her powers, since she has to speak “I heard a rumor…” for them to work.

The comics center around JFK’s murder as well as the show, but he is killed in a much different way. See, in order to stop the anomaly, the Temps Aeternalis needs Allison to do them a favor. They threaten to kill Five’s mother when she was pregnant — WITH TWINS. Allison decides to work for them and they do surgery to fix her vocal chords.

Just what did they need her to do for them? Whisper a couple of words — “Mr. President, I heard a rumor that the back of your head exploded.”

Not Vanya’s Fault This Time

The upcoming apocalypse is not Vanya’s fault this time when it comes to the comic books. In the show, well, that is another story. In fact, Vanya is barely even in the comic book version of “Dallas”. So when season two gave us a great story of her amnesia, which she did have in the comics, and then extended it into a new love interest, I was totally taken by surprise.

In the comic books Vanya spends all of her time bedridden after nearly bringing on the apocalypse. In the Netflix show? She is on a farm with a family and things get complicated when she falls in love with Sissy, the wife of the family she is living with. The husband is not a fan of this, as is to be expected.

He turns her into the FBI as a suspected Russian terrorist, there to assassinate the President. As they torture her, her powers go crazy and the building she is in explodes. This causes the FBI to suspect that it was an attempt at the President’s life. He blames the Russians and starts a war. A nuclear war. That causes that new apocalypse.

Diego learns of this after his visit to the commission and tries to stop it. Ben ends up being the hero. I don’t want to dive too much into exactly what happens because honestly, you just have to watch it. It is so good. And have tissues ready.

No Ben At All

One of the saddest parts about the comic books is that Ben dies and then, that’s it. While yes, Klaus has powers to commune with the dead, Ben does not follow him around like he does in the Netflix show. Klaus’ powers are much stronger in the comic books and he can even travel through electricity. It is pretty wild.

Ben is one of my favorite characters in the Netflix show, and he is a pretty major part in season two. So it was strange not to have in the comics during Dallas at all.

I absolutely loved this story line in the show. The Handler is doing everything she can to take over the commission, including recruiting Five to murder the board of directors. He only does this because he thinks it is the only way to get him family home. But of course, she tricks him, giving a timeline that is impossible to meet.

Lila is introduced as someone who is stuck in the mental hospital, alongside Diego. But come to find out, she is working for The Handler. And is her daughter (adopted). I do not want to spoil the whole story here because it is so good that it needs to be experienced first hand. However, this was a complete twist for me because neither of these characters appear in “Dallas” at all.

One of my favorite things about the comic book is the reveal that two of the siblings are actually biologically related. This is something that could totally be added to the Netflix show in the future, and I really hope that it is.

How do we find out? Well remember when I said the commission was ready to kill Five’s mother back when she was pregnant? They reveal to Allison that she was pregnant with twins and lead the reader to think that Allison and Five are the siblings. Turns out she did what she did to save Luther. Awww… so sweet right? So yes, Luther and Five are twins and I am totally down for this to come to the show.

So basically everything that happens is different than in the comics because, well, that just isn’t the set up there. Not all of the family is in 1963 and the ones that are, are there for a very short period of time. This makes the comics worth reading and the show worth watching. Two different, but similar stories, that are both pretty darn amazing if you ask me.