Smash Up is a card game that is fun for the whole family! And with multiple expansion packs, there is something for everyone!

My family loves to play games together. It is something we do every weekend. In fact, Sunday is usually family game day! We pick several games and spend hours playing them — laughing together and bonding. Because we have been cooped up in the house so much recently, we have been adding a lot of games to our game cabinet.

Over the next several weeks, I plan to tell you about some of our favorites — and why you should be checking them out too! First up is Smash Up, a super fun card game that has so many expansions, it will always feel like a new game! This game is for two to four players, and perfect for family game night. 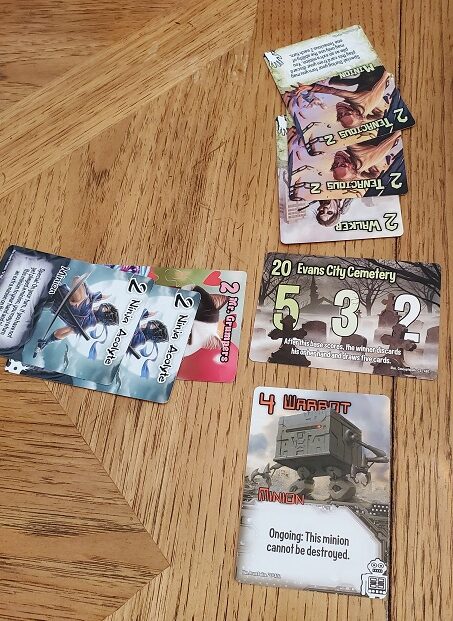 The name Smash Up is perfect and I will tell you why. There are multiple faction decks of cards — princesses, pirates, ninjas, robots, dinosaurs, cats, mythical horses, etc. Each player chooses two factions to “smash up” to make one deck. There are nearly endless possibilities, especially when you stock up on expansion packs — making this game always different. Not to mention all the different bases that are available.

So how do you play? It is a pretty easy game actually (but that does not take away from the fun of it). Five bases are put out in the middle of the players and each round, each player plays a Minion and/or an Action. Each Minion has a power number, as does each base. Once the power number of the Minions on the base add up to or exceed the base power number, that base is blown! 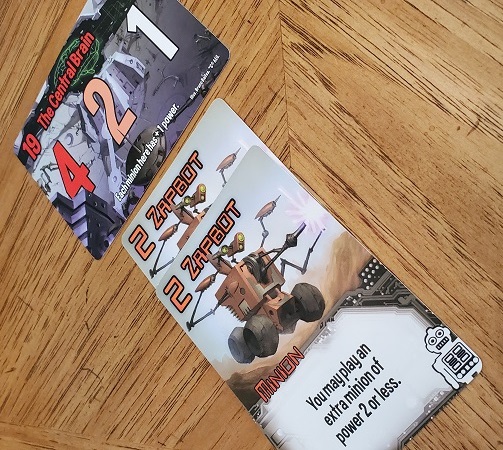 The base has three large numbers on it. The player with the highest Minion power number gets the first number of Victory Points, the second gets the second, and the the third gets the third. If a fourth player has Minions on the base, well, they are out of luck and get no Victory Points!

What is our favorite thing about Smash Up? That we haven’t gotten bored with it, even after playing it over thirty times! The different factions all have different skills, and it is really fun to mix and match them, to see what you can come up with! Sure, you might find your favorite deck to play with (I am partial to Princesses and Robots myself), but if you switch it up every now and then, it will always feel like a new game! 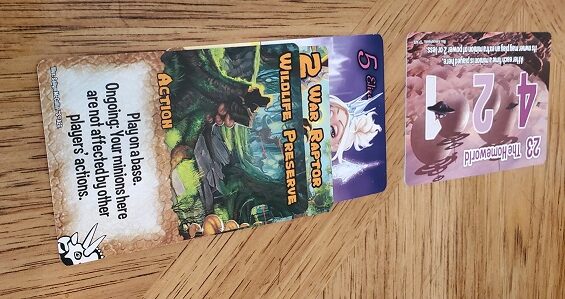 Can Kids Play Smash Up?

The manufacturer recommends that the minimum age to play this game is 13 to 15 years old. But I do not agree with that number. My girls are 7 and 9 years old and they LOVE this game! They are really good at playing and have won more than once. They know how to strategize when it comes to these types of games. Perhaps that is because of the caliber of games we often play with them, and have been playing with them for years.

When we first started playing, we would have to read a card or two here and there. One time we had to get encourage our 7 year old to play dirty, and use action cards that would hurt others in the game (she is just too nice sometimes). Overall, I think as long as your child can read, and understand simple rules, they will be fine with Smash Up.

The “shufflebuilding” game Smash Up starts with a simple premise: Take the twenty-card decks of two factions, shuffle them into a forty-card deck, then compete to smash more Bases than your opponents. Each faction brings a different game mechanism into play – pirates move cards, zombies bring cards back from the discard pile, dinosaurs have huge power – and every combination of factions brings a different play experience.

During play, Base cards (each with their own difficulties and abilities) are in play. You attempt to have the most power on the Base from your minions when the Base is smashed. Sounds easy? How easy is it when an opponent’s Alien-Ninja decides to Beam Up your minions to other Bases – flat out Assassinate them?

What about when the Pirate-Dinosaur player Full Sails in and releases King Rex to stomp your minions into the ground, or when the Wizard-Zombies use their Mystic Power to create an Outbreak, suddenly flooding minions onto the Base from the discard pile? Or what if you faced a Zombie-Dinosaur player instead and he created an Outbreak of massive beasts all at once?

When a Base is smashed, each player in first, second and third place scores points. Fourth place? Sorry, bro – try harder next time. With eight different factions, Smash Up includes dozens of combinations to try. Pirate-Aliens play different than Ninja-Aliens, for instance. Which will you use to smash up your opponents? And did we mention the dinosaurs have laser beams?

Shop Smash Up and its Expansion Packs on Amazon!