Irresistible successfully points out the issues with politics nowadays without choosing a side. Instead it just points out all the flaws, in a very flawed system. 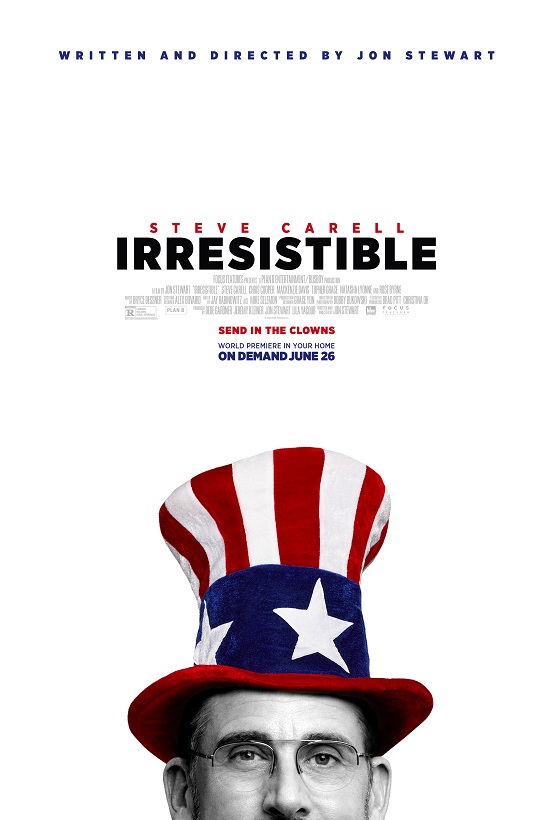 When I first saw the trailer for Irresistible, I knew it was a movie I was going to watch. Steve Carell is always a good casting choice, in my opinion, so I was instantly excited about this film. That, and the fact that it seemed like it was going to touch on politics — but without really choosing a side. Which I can respect. A movie for a broader audience, if you will.

Irresistible starts off with the results of the 2016 election. It places two of the main characters Gary (played by Steve Carell) and Faith (played by Rose Byrne) right in the thick of it. Viewers see Faith working with the Republicans on the Trump campaign, and Gary working with the Democrats on the Clinton campaign. I must say, the press room scene with them both being totally honest — talking about lying and twisting words — is pure perfection.

When Gary sees a viral video of a small town man who wants to run for mayor, he is intrigued. This man embodies democratic morals but also appeals to republicans because of his life choices (military, farmer, widow..). Gary knows this man could make national headlines, and show people that democrats are learning how to speak to and understand the “working man”.

His goal is to make national headlines with this mayoral race and he does just that. It gets the attention of the republican part, who quickly send in Faith to help the republican Mayor keep his position. The antics between the two are hilarious because we know they are real tactics. Opening up super pacs for donations, making up lies, digging up dirt… these are all things that real politicians do.

Then the movie takes a major twist. When you put it all together, you won’t be able to do anything but laugh and shake your head. The crazy thing about it all is this is not based on a true story, but it could be. That is what makes you realize the divide in the country we live in just might be for ridiculous reasons. Should we do away with political parties? I don’t know. But we certainly should take a deeper look at them.

Irresistible will not only make you think, it will also have you laughing. The all star comedy cast is fantastic and makes this movie a must watch. The exchanges between Steve Carell and Rose Byrne are some of the best comedic gold I have seen in a while.

Written and directed by Jon Stewart, Irresistible is a comedy about what happens when a small Wisconsin town becomes the main attraction of our modern-day political circus.

When the Democratic National Committee’s top strategist Gary Zimmer sees a video of retired Marine colonel Jack Hastings standing up for the rights of his town’s undocumented workers, he believes he has found the key to winning back voters in America’s heartland.

However, when the Republican National Committee counters him by sending in his brilliant nemesis Faith Brewster, Gary is more than primed to up his game. As Gary and Faith square off, what started out as a local race quickly becomes escalates to a national political battle and a hilarious fight for the soul of America.