Living in upstate New York also means living really close to the Canadian border. At least twice a year we drive across, and visit our neighbors to the North. We love to check out museums – and one of our favorite is the museums in Ottawa. The Canadian Museum of Nature rotates special exhibits and it just so happens we decided to visit the opening day of the Pterosaur exhibit.

I was shocked by how much I learned about these flying animals (that are NOT dinosaurs!). If you are ever in the area, I highly suggest checking it out!

I was shocked at the amount of fossils that were on display in this exhibit. Some of the coolest ones were the skulls, where we could see which Pterosaurs had skin flaps, and which ones didn’t. The crests are REALLY cool and it seems like we don’t 100% know what they were used for – could be balance and flying, or could be for mating.

I recommend taking at least 20 to 30 minutes to check out this exhibit fully. There are lots of things to read and see – and lots of things for the kids to play with! There is even a museum employee set up with a few different things to see up close! You can see the difference in wings and even touch a bird wing!

For the Young Ones

Probably because of myself and my husband, my girls enjoy visiting different museums as well. The Pterosaur Exhibit is the third special exhibit we have seen at this museum (my youngest ate a bug during the bug exhibit a few years back – GROSS), and one of our favorites.

The special exhibit always has things that are specifically for the kiddos, which I love being a mom of two little ones! My youngest daughter was a huge fan of the nesting area, where she could put on some Pterosaur wings, sit on some eggs, and even hatch them (well there are little stuffed animals). Too cool!

There was even a spot where you could learn to build the different Pterosaurs! There were magnets of their bodies, heads, and tails (when they had them). My daughters thought it would be fun to mix and match them, however. But this was a really cool way for kids to learn more about these creatures.

There is also a section where my kids (and yes, my husband and myself as well) could fly like a Pterosaur! We were able to dive for fish, eat bugs, and soar above the lake. Yeah, it was really cool! I tried too, and thought it was pretty hard to do, although she got the hang of it quickly. She even caught a fish within seconds of flying! 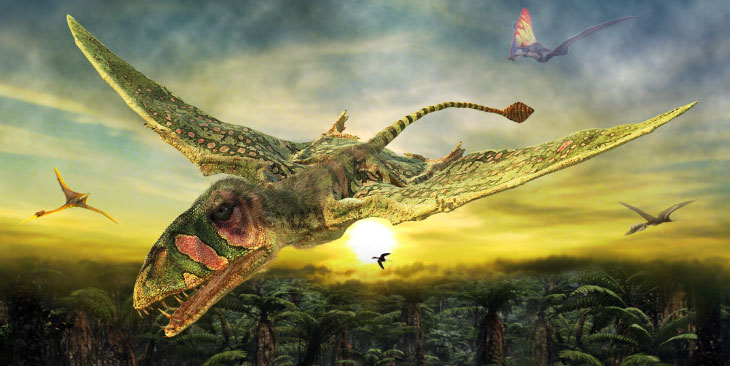 Discover an extraordinary chapter in the history of Earth. Just as dinosaurs began dominating the planet, pterosaurs ruled the prehistoric skies. With a wingspan as wide as that of a jet plane, some of these flying reptiles were as spectacular in appearance as they were amazing in flight.

Join world-renowned naturalist and documentary filmmaker David Attenborough as he recounts the fascinating story of how humans first discovered not only that these creatures were real, but also that they could actually lift off and soar—until they suddenly disappeared from existence.

The movie has suspenseful scenes. Enquire at the reception desk for more information. This award-winning documentary was produced by Atlantic Productions. Duration: 20 minutes.

Flying Monsters 3D was amazing and I really recommend it. It plays in English and French, so be sure you choose the right viewing. It was really cool to learn more about these animals – I totally thought they were dinosaurs until now, but they aren’t! They are also super cute when they walk around on all fours!

The Pterosaur Exhibit is currently the featured special exhibit at the Canadian Museum of Nature, now through September 2nd, 2019.

Big as a fighter jet, or small as a sparrow, they lived for 150 million years—the original fear in flight. Don’t miss the largest gathering ever of winged reptiles in this limited-time, Canadian premiere exhibition.

Live like a flying predator. Navigate a pterosaur over a prehistoric landscape. Soar, turn, or dip over land and water, and even swoop down to catch fish. Experience this larger-than-life exhibition for yourself.

Pterosaur: Flight in the Age of Dinosaurs is totally worth checking out!
Only at the Canadian Museum of Nature!