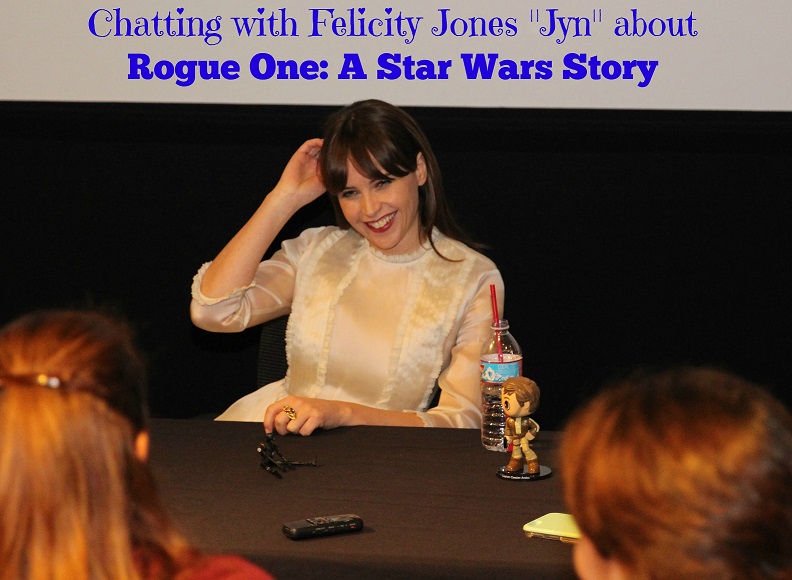 I am a huge Star Wars fan – in fact my husband and I planned our wedding around the dates for Star Wars Weekend at Disney World. So, of course, when The Force Awakens was announced several years ago, we were super excited. After it blew our minds, we knew that Rogue One: A Star Wars Story would do the same. We were excited to learn about more characters in the Star Wars universe and see just how the Rebel Alliance got the Death Star plans in their hands.

When I was invited to San Francisco by LucasFilms and Disney, I about died. I was THRILLED to be selected and could not wait to see who we would interview. We got to chat with a lot of the cast (who are all amazing, so keep checking back for more interview stories) including the female star, Felicity Jones, who plays Jyn Erso. After seeing a little bit of Jyn in the 28 minutes of Rogue One footage we were shown, I was already in love with her. She is a kick ass girl and I could not wait to talk to Felicity about her.

We all wanted to know a little bit more about Jyn, so we asked Felicity to tell us about her.

“She has a very strong ideology. She hates the empire – she hates everything they stand for. They have destroyed her family so anytime she sees a storm trooper she is like an animal who wants to take them down. At the same time she has a wonderful humanity. She learns how to be a leader throughout the film. She starts off as a bit of an outsider and is very suspicious and untrusting of people. She’s had a bit of a hard life. There’s been quite a lot of struggle, so it’s not easy for her to trust people. Throughout the film you see her actually forming these kindred spirits with the other rebels.“

This I could tell by watching the footage I saw – and honestly in the trailers of the film. I am happy to know that she grows throughout the film and cannot wait to watch more of her journey.

Finding Out She Was Joining Star Wars

Star Wars is a pretty big deal, I think anyone can agree on that. Someone asked Felicity how she found out she got the role of Jyn.

“I had a phone call from Gareth Edwards but my agent, who I’m very close to, said to me, ‘I’m pretty sure it’s yours but, when Gareth phones you up, can you make sure that you sound really surprised?’“

I can only imagine trying to sound surprised when you get that news and you already kind of knew about it. The best part of her story though, was how she reacted when she found out.

“‘I was thinking, ‘that’s great but there’s gonna be a lot of training involved in this film so I’d better get my ass to the gym.’“

The entire room cracked up! Felicity really made us feel welcome and like we were just some close friends she was chatting with.

What She Brought to Jyn

I’ve heard more and more about actors actually bringing a lot to their roles and making suggestions for the directors. It seems like the set of Rogue One: A Star Wars Story is no different.

“Throughout everything, [the set]was very collaborative. Originally the costume [was]combat style: combat trousers and a flack vest. I tried that and it didn’t feel quite right and it didn’t feel Star Wars enough. So we had quite a lot of discussions about bringing in something more Japanese style that you see in those early films with OB Wan Kenobi – the martial arts type clothing that they wear. [In order to] bring out that side of Jyn – to bring something a little bit more spiritual into her characterization through the costume. Every step of the way it was a very, very open dialogue for all of us to bring as much as we wanted to the characters. “

I think that is a really important thing for directors to allow on the set. The cast really is becoming their characters and so they usually can add a lot of great points to why a character would do something or wear something.

Training for the Role

Speaking of how tough Jyn is, we asked Felicity what sort of training went in to her role. We learned that she took Judo when she was a young girl, but that she needed more training to prepare for Rogue One.

“I’ve never done any of this stuff before so it was just learning everything from the very beginning. Working very closely with the stunt team who took me through these acrobatic moves that Jyn would have to perform eventually in the film. It was just a lot of practice.“

Since Jyn’s role is very physically demanding, we wanted to know if there were any injuries. Felicity let us know that she went home after filming many times with huge bumps and bruises that she blames on her adrenaline.

“You don’t realize because the adrenaline is pumping so much and then you get home and you literally to have enormous bruises all over. I probably bring it upon myself because I get really into it and take it very seriously. I like to do as much as possible. It’s nice when you can see the actor actually doing as much of the stunts so that it feels believable.“

We tried to get Felicity to give up the details on any love interest in Rogue One, but she was biting her tongue. However guys, she never said no, she just said “There may be something.” I have my fingers crossed that Jyn will find love. She did however, let us know that Jyn will be rewarded in some way for dealing with such a hard life.

“What’s great about her is her perseverance and her determination. It definitely pays off and at the end you feel like there’s justice. “

Being a Part of Star Wars

We asked Felicity what being a part of Star Wars means to her and her response was very similar to what I was saying if I were asked (and I think the same as many Star Wars fans too!).

“I feel the reason it’s lasted for so long is [that]it is about family – and it’s not just blood relations – it’s also the family that you form with friends. I think what’s so special about it is those friendships are across different races and different languages. It’s people who come together and they’re united by fighting the forces of evil. I think generations and generations tap into those relationships and really empathize with those characters.“

Speaking of forming friendships that are like a family, Felicity let us know that the cast was very close on set.

“I absolutely love all of them and everyone is very different and we all have our quirks and our ways but there is a real spirit of collaboration. I never felt like there were any huge egos, it felt like everyone was in it together and there was real support. Working with a group of men you could think that they would be sort of trying to cut you down or compete, but I was very lucky. They were very supportive throughout everything.“

The Women of Star Wars

We brought up that the women of Star Wars tend to be very strong – and that from what we saw of Jyn, she might be the strongest yet. Felicity told us her thoughts on that.

“I just wanted the audience to really care about her and empathize with her and be in it alongside her. She’s very resourceful and it was very clear to Gareth and I [that]we didn’t want her to keep being saved. Sometimes in films the female character is often the one who’s in distress and then the male character comes and gets her out of it. We were very clear about making sure that she could survive on her own. She’s capable but at the same time they do need each other – there is a team and a part of what makes someone strong is being able to work in a team.“

When asked what she wanted young girls to take away from the character of Jyn and her experiences, Felicity’s response was great.

“What I like about her is she’s not a princess, she’s not rich, she’s not privileged – that’s what we’re used to seeing in these leading Disney roles. She’s very much an ordinary woman and ordinary girl who’s had to make the best of things. What I would like young girls to take from it is resourcefulness and self reliance. Jyn isn’t always sweetness and light and giggles – she is exactly who she wants to be. I think that it is important that young girls don’t feel like they have to conform to some idea of what a girl should be. You can be whoever you want, whatever you are, and take confidence in that. There isn’t a standard that we should all be working towards. It’s about finding you, celebrating what’s different about us, and society letting that come through.“

That is something that I certainly try to instill in my young girls as they get older. I want them to be who they are. It sounds to me like Felicity Jones and Jyn Erso will make perfect role models for them.

Be sure to check out Felicity Jones in Rogue One: A Star Wars Story!