Disclosure: Mama Smith was provided with an all expenses paid trip to cover this event. All opinions expressed are 100% her own.

I am a huge fan of Disney’s Short films. One of my favorite parts about seeing a Disney movie in the theater is knowing that I will most likely get to check out a fun short before the film. They always amaze me because they are only around 8 minutes long (hence the name shorts) but they tell a complete story. Disney knows how to bring the feels! These shorts know how to make me laugh, and boy oh boy do they know how to make me cry. When I learned that Disney Animation Studios was releasing a collection of these shorts on BluRay/DVD I was super excited! My girls and I love watching them and having them at our fingertips to watch whenever we please is awesome. The DVD arrived about a week and a half ago and we have already watched it through at least 10 times. This collections consists of Frozen Fever, Feast, Get A Horse!, Paperman, Tangled Ever After, The Ballad of Nessie, Prep & Landing: Operation Secret Santa, Tick Tock Tale, How To Hook Up Your Home Theater, The Little Matchgirl, Lorenzo, & John Henry. While at the D23 Expo this past weekend I was lucky enough to sit down with some of the creators of these incredible shorts.

Talking with these creators was like a dream come true. I loved learning about the different shorts, how they came about, and even about some fun Easter Eggs! Let me start off by saying that these four people are ridiculously brilliant and just being in the same room with them was an honor. The first question asked was to Dorothy about which one of the short’s that she worked on was her favorite. Of course this was a tough question because she has worked on so many incredible shorts. She stated that she loves them all for different reasons but that she leans toward Get A Horse!, which I must say is a great choice. Her reasoning? “Just to be able to bring a continued Walt’s legacy and his dream of doing shorts and using his voice in that short. Everything authentically was Walt in that short.” Yup, you read that right, even though the animation was completely new, they used Walt’s voice completely in that short. As a matter of fact, we learned that they could not find the word “red” anywhere and when they screened it to John Lasseter – he picked it out immediately. They went back and finally found the correct syllables to piece together the word.

When it comes to inspiration, the creators admit that they find their inspiration in many different places. Mike Gabriel says that his inspiration for Lorenzo came from Joe Grant, one of the earliest Walk Disney super stars of the studio. “So Joe had this idea for Lorenzo the cat made back in the 40’s. He left in 1950. So he’d been there from ’33 to ’50. 17 year run, he left for 40 years. He came back in 1989. He still had this Lorenzo idea in his head and he put it up in the drawings. He kept it alive.  When Don Hahn started doing a Fantasia 3 – it didn’t get finished, but he was developing Fantasia 3 – Joe kept those drawings out in front of his office. Don said, ‘Mike you wanna check the Joe idea with the cat and the tail thing and put it to a tango for this Fantasia 3?’ And I said, ‘Hell yeah I do.’ So you know that’s sort of where the idea came from and I was the lucky to be one that was asked to do it.” Lorenzo is one of my favorite shorts. I think it is fun and even a little dark – but mostly fun – so I am really glad that this idea came about. My daughters love it as well – it has a Tom and Jerry feel to me. Classic. 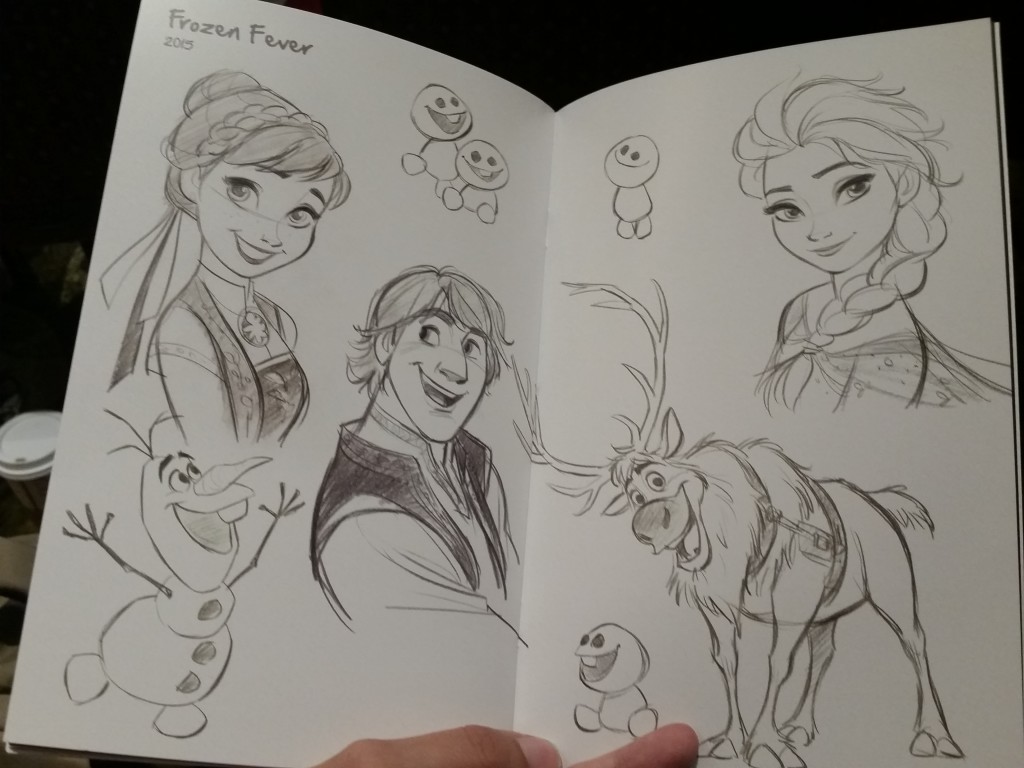 Mark Henn pointed out that the legend of John Henry is something that he grew up with – and he thinks all of us have at some level. “What I found interesting is the fact that Disney and some of their short films involved American Tall Tales and Legends it actually alluded to John Henry. It is mentioned twice in the title sequence to Johnny Appleseed and Paul Bunion, but they never did anything with it as far as I knew or could find, except for those two little title cards, and I thought this would be a great. We should do something with it.”  For Peter, of course we know where the main inspiration came for Frozen Fever – from Frozen itself. He goes on to explain that “the idea that we get to explore a different side of Elsa and find certain comedy in her really appealed to us. And we started the short not that long after the movie – about 6 months after the movie – but we had just released in some of the foreign territory. So the movie was very fresh in our minds, but it was really the idea of exploring a different part of Elsa.“ 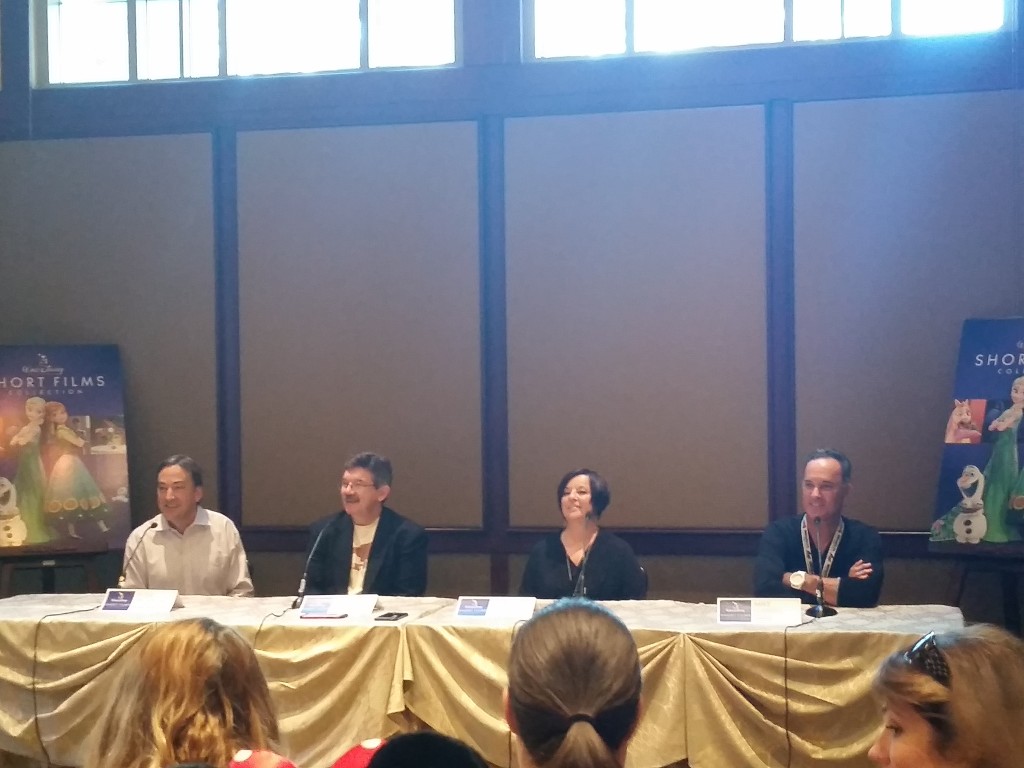 When asked if anyone has ever done a short and then wanted to take it further and create a feature, the answer seemed to be no. Mark mentioned that he was not aware of the reverse – because we all know several short films have come after the feature (Frozen Fever and Tangled Ever After for example). Mike chimed in saying that he has had people ask for a Lorenzo feature (I love that idea!) but that there is one feature that was inspired by a short. Can you figure it out? Fantasia! This idea stemmed from the short, The Sorcerer’s Apprentice. Boy am I glad that was brought to a feature! One really cool thing about Walt Disney Animation Studios is that anyone – even a production assistant – can take an idea to John Lasseter. He allows anyone to pitch to him. I think this is awesome because a fantastic idea could come from anyone. I also learned that a lot of shorts are used to test out a director or new technology. “The Old Mill, for example, was playing with the multiplying camera back in the 30’s and 40’s.” Mark Henn explained. “I’m thinking of a little short called Goliath. It was about a miniature elephant, but they were basically testing out the Xerox camera process which replaced inking painting – our inking at that point in the studio’s history. So those kind of things get their birth or get launched in a short and often get implemented in a feature.“

As for the Easter Eggs we heard about – one of the Snowgies in Frozen Fever resembles a certain lovable, inflatable, BIG personality – Baymax from Big Hero 6! Dorothy McKim let everyone know that in Get A Horse, Oswalk peeks through right at the end. We also learned from Peter Del Vecho that there is an Easter Egg in the Frozen feature film that no one has found yet. They wouldn’t share with us so it is time to watch Frozen on repeat in slow motion until we discover it! The animators also love to put themselves and others who have worked with the films in them as characters. For example, in John Henry, Byron Howard (who directs Zootopia), appears as one of the railroad workers in John Henry. Mark Henn appears as one of the polyps in The Little Mermaid (the one with a mustache) and as soon as he mentioned that, I knew exactly which one he was talking about. For another take on this interview – and more photos! – read Christa from The Fairytale Traveler’s take. 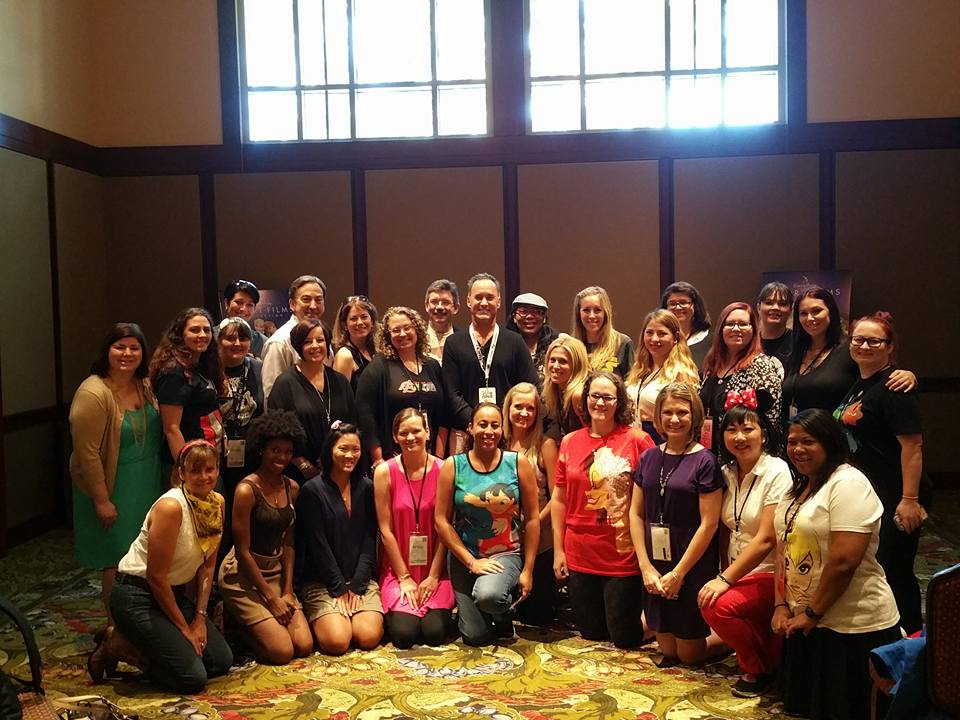 The Walt Disney Animation Short Films Collection is available on Blu-Ray/DVD/Digital HD as well as Digital HD on the Disney Movies Anywhere app and website TODAY! The bonus features include a short (no pun intended) interview with the creators by TJ Miller (the voice of “Fred” in Big Hero 6)!
Purchase yours here.