Disclosure: Mama Smith received an all expense paid trip from Disney/Pixar to attend this event. All opinions expressed are 100% her own.

“There is nothing like a Disney Red Carpet.” That is what I was told as we pulled up to the Inside Out red (or should I say purple) carpet premiere at the El Capitan Theater in Hollywood. I knew this was going to be an amazingly wonderful once-in-a-lifetime experience but I didn’t know the half of it. I got butterflies as I stepped out on to the purple carpet. I snapped a picture and then put my phone in my wristlet so I could look around and take it all in. I could have stood in that spot the entire night and watched the bustle of the carpet. The paparazzi on one side, behind barriers, yelling stars names hoping for the perfect shot – on the other side, fans hoping to get a selfie with or a wave from their favorite actors. A wave of emotions overcame me (fitting I guess considering the movie) and I felt overwhelmed for just a minute. Then it was time to focus and enjoy my night.

The carpet was filled with family friendly activities. Everywhere I looked there was a project or a game that kids and their parents could enjoy. Right at the top of the carpet there was a hair coloring station where kids could add a streak of red, blue, purple, yellow, or green to their hair. I was really tempted to get something added myself! As I walked down the red (purple) carpet I stopped to get my photo taken with all of the characters displayed on the backdrop. That in itself was very surreal. I have seen countless photos of actors and actresses in front of premiere backdrops and never thought I would get my photo in front of one. At the end of that walk was the desk from headquarters inside Riley’s head from Inside Out. And behind that – well, behind that was something I could never have imagined.

As I walked through the giant archway, the first thing I laid my eyes on was a juggler on stilts. Behind him were tables and tables of food – bars filled with drinks, and coolers strategically placed with water and soda (it was a hot one guys). Right in the center was the memory bank. There was balls of each color (Joy – Yellow, Disgust – Green, Fear – Purple, Anger – Red, Sadness – Blue) and I was able to write a memory on one of those balls and put it in the memory bank. I chose Joy, and wrote about the birth of my daughter – then sent it up the shoot in to the bank. This was a really fun and cool experience. I love how it really tied in with the movie (just like all the activities did) and was fun for everyone to participate in. There was also Imagination Island (where you could create stress balls, family trees, decorate Snackeez, and emoticon rocks), Honesty Island (where you could wear a helmet and take a lie detector test to see if you really like broccoli pizza or have imaginary friends), Goofball Island (where you could play fun games like tossing a ball into spinning circles). There was even a place to make your own flip book (check out the video of mine below with April from April Go Lightly and Shelley from Sweep Tight).

Had a blast in LA turning strangers into new friends! Miss you ladies already – @aprilgolightly & @teenybod!

Walking around the carpet and seeing celebrities experiencing this fun with their families was amazing. I got to watch Garcelle Beauvais and her family were in front of us in the flip book line and we got to see them goofing around as they made theirs. I got to watch Patton Oswalt and Mario Lopez play at Goofball Island with their daughters. Having two girls myself, I love seeing that father/daughter bond in action. It is truly heartwarming. There were many other celebrities at the Inside Out premiere – Johnny Knoxville, Billy Crystal, Bobby Moynihan, Rashida Jones, even Pink! If you scroll down just a little bit, I have included lots of photos of the celebrities from the Inside Out Premiere and purple carpet.

Joy and Sadness were also walking around the carpet taking photos with people. That was a fun touch that I know all the kids loved (and OK the adults too). As everyone was heading in to the theater to watch the movie, the voices of Inside Out went up by the headquarters desk and got a group photo (with Joy and Sadness). I was right behind them as they took it and that was pretty awesome to see – so much talent all together, laughing about their journey making this film and excited to see it on the big screen.

We had to check our phones and cameras in before going in to the El Captian Theater to watch the film so I do not have any inside photos for you. That was one of the coolest parts of the night. As I went to my seat someone was up on stage playing the piano and putting everyone in a party mood. I got to sit in the front row of the theater and really take the whole movie in. It was an incredible experience all around. I will have a full review of the film coming soon (Hint: bring tissues), as well a post about the product line, and Inside Out’s involvement with Disney Infinity 3.0. I even got to sit down and chat with Kyle MacLachlan (who voices Dad in the movie) and will have something up about that as well. Inside Out comes to theaters this Friday, June 19th so be sure to go see it. After watching the film, I can honestly say it is going to be as big as (or even bigger) than Frozen. 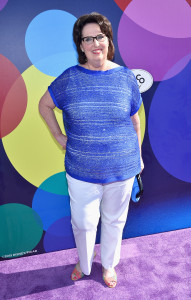 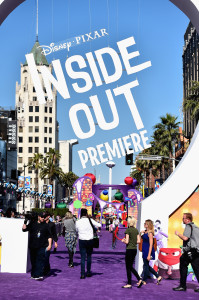 Do you ever look at someone and wonder what is going on inside their head? Disney•Pixar’s original new film “Inside Out” ventures inside the mind to find out.

Based in Headquarters, the control center inside 11-year-old Riley’s mind, five Emotions are hard at work, led by lighthearted optimist Joy (voice of Amy Poehler), whose mission is to make sure Riley stays happy. Fear (voice of Bill Hader) heads up safety, Anger (voice of Lewis Black) ensures all is fair and Disgust (voice of Mindy Kaling) prevents Riley from getting poisoned—both physically and socially. Sadness (voice of Phyllis Smith) isn’t exactly sure what her role is, and frankly, neither is anyone else.

When Riley’s family relocates to a scary new city, the Emotions are on the job, eager to help guide her through the difficult transition. But when Joy and Sadness are inadvertently swept into the far reaches of Riley’s mind—taking some of her core memories with them—Fear, Anger and Disgust are left reluctantly in charge. Joy and Sadness must venture through unfamiliar places—Long Term Memory, Imagination Land, Abstract Thought and Dream Productions—in a desperate effort to get back to Headquarters, and Riley.