The Devil All The Time is a new movie on Netflix that has an absolutely amazing cast — but is quite a slow burn. So is it worth watching? 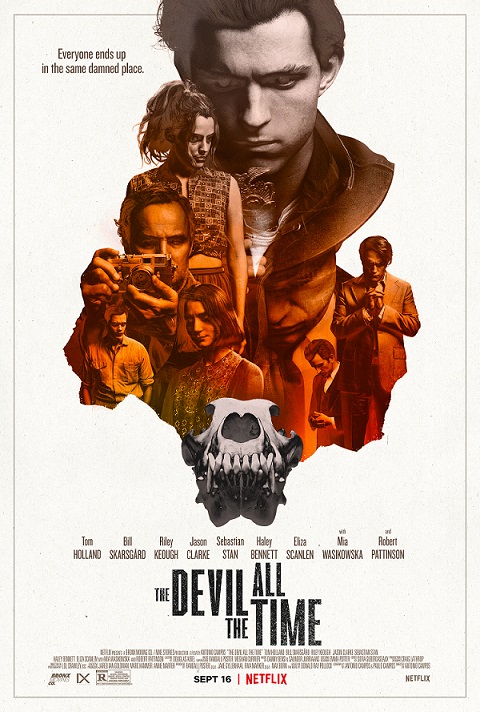 The Devil All The Time is not a fast paced movie filled with twists and turns. Instead it is a slow burn, but all totally worth the nearly two hour and twenty minutes you will spend watching it when you get to the end. The final half hour is when it all really comes together and everything gets connected, and tied up in a neat little bow.

In The Devil All The Time there are several different stories going on, and you are jumping through time. We see Arvin grow up from a baby, to a 9 year old, to a teen (this is when he is played by Tom Holland). This is mostly his story, but there are a lot of other stories along the way as well. Eventually everything comes together.

Each and every one of the stories is at least a little but dark. There are suicides, murders, rape, and deceit. If you do not like that sort of thing, this may not be the movie for you. But if those things don’t bother you in a film, The Devil All The Time is well worth the watch. Here’s a fun fact, the author of the book (Donald Ray Pollock) is actually the narrator of the film, so that is a really cool touch.

An All Star Cast

Although the entire cast is simply amazing, and the acting in the whole movie is exceptional, Tom Holland and Robert Pattinson really stand out. Robert Pattinson was not in the movie nearly as much as I would have liked, but he excelled in all of his scenes. Bill Skarsgard is another actor who does a great job, but is not in the movie much. There are a lot of those, honestly. The characters come and go throughout the movie, but each one has a great actor or actress playing them.

The main plot of the movie centers around Tom Holland’s character, Arvin. While Tom is not in the whole movie (Arvin is portrayed at different ages), his is the best performance, in my opinion. He is one talented actor and I could feel what he felt most of the time. When he was angry, I was angry. When he was scared, I was scared. And when he was heartbroken, so was I.

This cast ensemble really makes the movie worth watching all on their own. And had the film not picked up after the halfway mark like it had, I still likely would have rated this a must watch just for that reason.

Like I said before, all of the stories have some darkness to them. Viewers get the idea that everyone has their secrets. Everyone has their dark side. And maybe you shouldn’t ever rely on someone else to be there for you. Not when it really matters, anyways. Humans and mischievous and deceiving, and will often do whatever they can to get their own way.

There were a handful of scenes that I had to look away from. Not because they were grotesque or filled with gore, but because they got too real. There are people out there like these ones, and that is a hard thing to think about. The world is not as safe as everyone might like to think it is.

As you sit down to watch The Devil All The Time brace yourself, the first half is slow. There is a lot of information, not much action, and stuff you need to pay attention to. But it doesn’t take away from the whole movie and you will be thankful when you get to the end, I can promise you that.

As the stories all start to come together, and viewers put together the entire timeline, the film picks up. The last half hour or so is spent telling the rest of Arvin’s story, as he heads back to where he started. The side plots all come to dramatic endings, ones that make for a big payoff to those that stuck through the first hour.

The Devil All The Time may not be a perfect film. But it is a slow burn with an ending that makes it worthwhile for those that stick around. Tom Holland stands out as the best performance in an ensemble of stellar performances.

Have you checked out my favorite The Devil All The Time quotes?

About The Devil All The Time

In Knockemstiff, Ohio and its neighboring backwoods, sinister characters — an unholy preacher (Robert Pattinson), twisted couple (Jason Clarke and Riley Keough), and crooked sheriff (Sebastian Stan) — converge around young Arvin Russell (Tom Holland) as he fights the evil forces that threaten him and his family.

The Devil All The Time hits Netflix on September 16th!