The Owners is a super creepy, wild, crazy ride filled with twists and turns and a whole lot of gore. An absolute must watch for fans of thrillers! 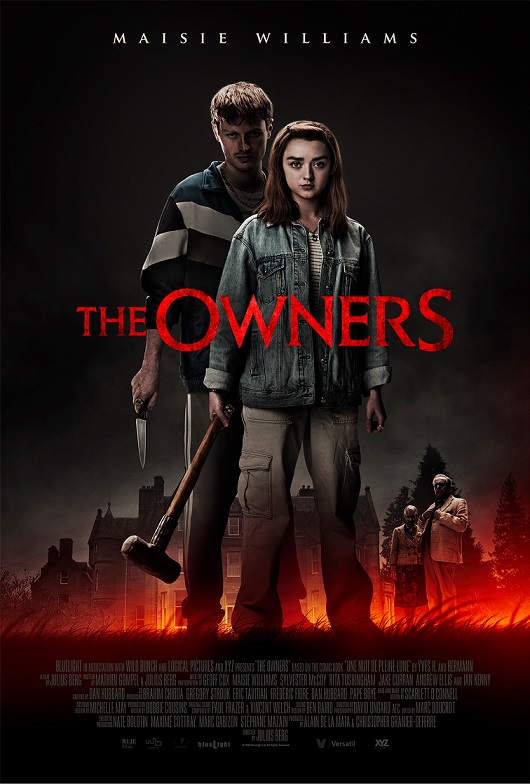 As soon as The Owners started, I had a feeling I was really going to love it. This movie is a thriller at heart, with some serious horror vibes sprinkled throughout. There is blood, gore, and a whole lot of suspense. Which if you know me, you know that is right up my alley. I was immediately sucked in and couldn’t turn away. This movie surprised me time and time again. Honestly it was the most fun I have had watching a thriller in a long time.

The set up of the movie is exactly what you would expect from a horror thriller film. A group of young friends decide to rob the empty house of a elderly doctor. They are sure there is a lot of money inside, and this can be their last big score. When they can’t crack open the safe they find inside, they decide to wait inside until the couple gets home. The plan is to scare them into opening the safe up for them> Sounds simple enough right? Nope. That is not at all what happens.

(L – R) Andrew Ellis as Terry , Jake Curran as Gaz and Ian Kenny as Nathan in the thriller , THE OWNERS , a RLJE Films release. Photo courtesy of RLJE Films .

Sure, the plan seems to be going well at first, but then things quickly take a turn and what comes next is one epic twisted tale. There were many moments where my jaw literally dropped because I did not see something coming. I was on the edge of my seat, soaking it all in, while simultaneously begging for more.

The actors that play the elderly couple, Rita Tushingham and Sylvester McCoy, are beyond brilliant. They give off some serious creepy vibes right from the beginning and I am pretty sure I am going to have nightmares about The Huggins for the rest of my life. They were that good.

Maisie Williams as Mary in the thriller , THE OWNERS , a RLJE Films release. Photo courtesy of RLJE Films .

Maisie Williams plays the main character, Mary, and I love seeing her in a role like this. I am so used to her playing Arya in Game Of Thrones. Even though she does come through with some pretty brave moments in The Owners, she is much different than that role. This movie showcases her talents and how much depth and range she has an actress. To say she was the perfect casting choice is an understatement.

The rest of the supporting actors were fine in their roles. None really stood out to me, but none had a negative effect on the film either. They played their parts well and got the movie where it needed to go.

(L – R ) Ian Kenny as Nathan and Rita Tushingham as Ellen Huggins in the thriller , THE OWNERS , a RLJE Films release. Photo courtesy of RLJE Films .

The Owners is ridiculously creepy from beginning to end. Half the time I had no clue what was going on, or what was going to happen next. My heart was pounding, I was on the edge of my seat, and I had no idea who could be trusted. My mind was spinning almost the entire movie trying to figure it all out.

This movie clocks in at just about an hour and a half which is the perfect length for a movie like this. You don’t have to wait to long for the action to start and once it does, it doesn’t stop until the very end. Speaking of the ending, this was one big twist that I did not see coming at all and wow was in incredible. I actually backed it up and watched the last 15 minutes twice.

(L -R) Ian Kenny as Nathan and Sylvester McCoy as Dr. Huggins in the thriller, THE OWNERS, a RLJE Films release. Photo courtesy of RLJE Films.

A group of friends think they found the perfect easy score – an empty house with a safe full of cash. But when the elderly couple that lives there comes home early the tables are suddenly turned. As a deadly game of cat and mouse ensues the would-be thieves are left to fight to save themselves from a nightmare they could never have imagined.

The Owners comes to select Theaters, On Demand, and Digital September 4th!