Ghosts Of War is a super creepy war movie that is full of jump scares. I love me some horror movies, but this one sure is intense!

If you know me, you know that I love horror movies. Don’t get me wrong, I hate being scared, but for some reason I enjoy doing it to myself. Yeah, I don’t get it either. One of my favorite aspects of horror movies is the suspense. I also kind of have a thing for gore. Again, I totally know this isn’t normal, but it’s me.

Ghosts of war takes all of the things I love about horror movies, and sticks in it a war movie — another one my of my favorite genres. So clearly, this movie is an absolute must watch in my opinion. This movie is beyond creepy.

Five soldiers are ordered to hold a French Chateau near the end of World War II. When they show up to relieve the group that is already there, they all but run from the place. One even leaves behind his ruck sack. It doesn’t take long for them to figure out why.

Creepy things start happening right away. Hearing noises, seeing things, and eventually, it goes a step further. Eventually one of them finds a journal in the home and discovers that there was a family in the house — and the Nazis murdered them when they first took the house. They drowned the son, hung the daughter, and set the father on fire — all before brutally murdering the mother.

When a group of Nazis show up and try to take the chateau, things get really crazy. The ghosts sort of help them fight them, and one of their own gets severely injured in the process.

As he is dying, he tells them to remember, and that this isn’t real. That it was them. I had no clue what that meant, but I knew it would mean something at the end of the movie. I refuse to give spoilers but let’s just say I had no clue where this twist was going — but it was amazing when it was revealed. 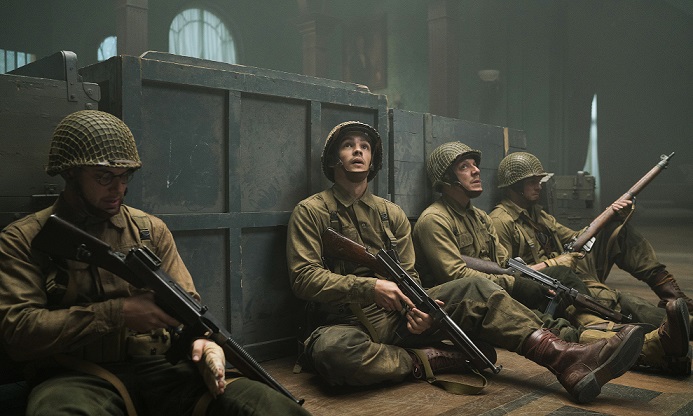 If you love horror movies that are filled with jump scares, Ghosts of War is for you. There is also some gore, although I have seen worse. The story overall is actually a good one. Honestly, often horror movies are lacking when it comes to plot but I was hooked into this one from the beginning, just trying desperately to guess what was happening.

I refuse to give spoilers because trust me when I say, this is more than worth watching from beginning to end. There were moments where my heart was pounding out of my chest, and then I jumped a mile when the suspense was finally broken.

P.S. The ghosts themselves are terrifying close up. So be ready for that. You can see them on the poster and they don’t look so bad… that changes in the actual film.

About Ghosts Of War

Five battle-hardened American soldiers are assigned to hold a French Chateau near the end of World War II. Formerly occupied by the Nazi high command, this unexpected respite quickly descends into madness when they encounter a supernatural enemy far more terrifying than anything seen on the battlefield.

GHOSTS OF WAR stars the ensemble cast of:

The film is the directorial sophomore film for screenwriter Eric Bress (The Butterfly Effect, The Final Destination).