Doom Patrol season two episode seven is called Dumb Patrol for a great reason. Scants infect part of the Doom Patrol with bad ideas and the results are hilarious.

The last episode of Doom Patrol ended with quite the Cliff-hanger. Do you see what I did there? Ha. I crack myself up. OK, seriously though, if you forgot Niles totally tossed Cliff out of the spaceship and sent him floating off into space. Crazy. So crazy. Needless to say I was dying waiting for the next episode wondering what was going to happen, and if we would understand just why he would do such a thing.

Doom Patrol season two episode seven started off with a previously on that made me think we are going to get some Mr. Nobody again — and that had me thrilled. It was also obvious we would learn more about what is going on inside Crazy Jane.

The very first scene of this episode is a phone ringing. It continues to go unanswered and then the machine picks up. It is call to the Eismann Gallery — another hint that this painting with Mr. Nobody in it will be coming into play again soon.

And it does. A package is delivered to the Doom Patrol and even though it says “DO NOT OPEN” all over it, they are compelled to open it. Probably because of the strange smoke that came out of it and went up everyone’s nose. Inside is the painting but Mr. Nobody and the Beard Hunter are not in it. Oh snap. This had me really excited because I love me some Alan Tudyk.

Meanwhile, Cyborg brings Roni home with him and she is very surprised to see that everyone he talked about is actually real. She thought it was an exaggeration but no, we all know that isn’t true. 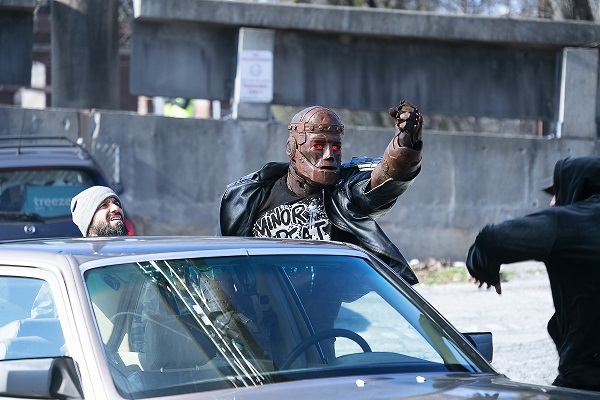 One of the first scenes is Cliff falling from the sky to Earth. So hey, at least he isn’t floating around space all alone (which I thought might happen). He crashes through a billboard featuring an autobiography by the dinosaur that is attached to the guy we saw way back when. Honestly, I kind of love this. Also, the dinosaur is a female named Denise.

The whole time Cliff is walking home, he is repeating to himself that he is going to kill Niles. Over and over and over. Eventually he freezes and cannot move. Lucky for him someone comes by and yes, will let him use his phone, however he makes him do shout outs for each use of his phone.

Eventually his legs loosen up and he gets moving again. He finally makes it home, having missed all the fun with the Scants. When he gets there he sees Clara waiting for him. Niles had sent her a VHS of his confession of what he did to Cliff. Perhaps this will be start of them repairing their relationship?

Niles and Dorothy have landed in the Northern Yukon Valley and it seems that he is searching for something. He leaves her asleep in the ship, bundles up, and heads outside. Turns out, he is searching for Dorothy’s mother. He needs to talk to her about their daughter and explains how dangerous she is right now.

We get to really see the Candlemaker in this episode, more so than we have in the past. Which was pretty cool. Niles calls on Kipling to help him make sense of it all. This is all taking place after the Scants — read about that below.

Niles tells him that this is “that call”. He must give Kipling the where and when and he will make sure it is done. The what is not given to the viewers, but I have to imagine he is ordering the death of Dorothy.

Rita has a dream that she was promoted to the role of the “Blob Lady” in the play. Then her mother crashes it and says she convinced the director of the play in a — less than appropriate — way. She wakes up from this nightmare and starts practicing her role as the Beekeeper again.

In order to perfect her craft, Rita goes to visit the Beekeeper to learn more about her. She witnesses her yelling at her daughter and she speaks up for her. Of course, a mother being mean to her daughter is a sore subject for Rita.

Rita and the Beekeeper end up having a few beers together and Rita ends up confessing everything to her. That she is now doubting herself and her career, because she knows that her mother and the producer hooked up, and she thinks that is how she got ahead.

The Beekeeper tells her that when she gets mad, she yells at her bees. She can’t hurt their feelings and it is a great way to blow off steam. So that is exactly what Rita does. She pretends the bees are her mother and expresses all her thoughts that she has been bottling up.

On her way home, she uses her powers to stop a mugging, and even throws in a nice little line “I’m sorry, did that sting?”. Because she is still wearing her beekeeping outfit. Get it?

As we know from the end of the last season, Miranda has taken over Jane’s body. She makes pancakes as a peace offering for Dorothy, but Dorothy is in space right now. Larry opens up to Miranda about his grandson being in the hospital and that he wants to go visit him.

He asks to speak to Flit and then they head to the hospital together, despite Miranda saying she thinks it is a bad idea. Of course, as soon as he shows up to see him, the government moves in with guns and tries to capture Larry. Flit grabs hold of Larry and transports them out of harms way.

They try again dressed as doctors, but that doesn’t work either. When they transport home they are asked by Cyborg and Roni to help them perform surgery on Roni. Everyone is overly happy and confident in everything they are attempting to do, and Miranda points that out.

At the very end of the episode, Larry goes to visit his grandson at the hospital, but the room is empty. He finds out that he checked out that morning and was doing much better. Crazy Jane realizes that another one of her personalities has gone missing in the underground. When she goes to her station to check on her, her station is closed.

Turns out the painting was infected by Scants. No surprise there. Totally knew something was going on! Good thing Niles has a slideshow presentation on Scants so the Doom Patrol could learn about them. And good thing Willoughby Kipling shows up to, sort of, explain it to them.

He gets them watching the video and they learn that Scants place bad ideas in your head when you are infected with them. The only way to stop the Scant infestation is to kill the Queen. Bad ideas can lead to death, and often do, per the video.

They all decide it would be a good idea to go into the painting and try to help kill the Queen. Miranda, who seems to be unaffected by the Scants, suggests they come up with a plan first. She turns her back for one second and poof, Larry, Cyborg, and Roni are inside the painting.

Inside the painting they see Scants and of course, start to talk to them and tell them their plan to kill the Queen. They get captured because, of course they do, and honestly, the Scants are kind of creepy and hilarious at the same time.

Kipling ends up getting captured too. He doesn’t have his mask anymore and he says he will initiate his plan once he is dead. Clearly he is now infected as well. Miranda still seems to be in her right frame of mind. The Queen doesn’t understand how she is immune to the Scants.

Miranda changes forms a few times and uses her powers to kill the Queen. It was actually pretty awesome to watch. This frees everyone else from her power. Turns out Roni took a bottle of what I assume is the idiot stuff they were pumping from their infected brains. But why? I suppose we will find out eventually.

Miranda helps protect the Doom Patrol from some truly terrible ideas after a mysterious package arrives at Doom Manor. Rita’s visit to the Cloverton beekeeper leads her to confront her lingering mommy issues. While on his way back to the manor, Cliff ends up stuck on the side of the road – literally. Niles heads north to find Dorothy’s mother.

A re-imagining of one of DC’s most beloved group of outcast Super Heroes: Robotman, Negative Man, Elasti-Girl and Crazy Jane, led by modern-day mad scientist Dr. Niles Caulder (The Chief). The Doom Patrol’s members each suffered horrible accidents that gave them superhuman abilities–but also left them scarred and disfigured.

You can watch Doom Patrol on HBO Max!