While The Wrong Missy is full of the humor you expect from David Spade and a Happy Madison Film, but it doesn’t hold a candle to past films and falls a little flat.

When I sat down to watch The Wrong Missy, I was hoping for something fun that would take my mind off what is happening in the world. Instead, I got a predictable movie with joke after joke that fell flat. Honestly, I don’t think I laughed out loud even once, and that surprised me. Who doesn’t love David Spade? And Happy Madison films almost at least make me chuckle.

This movie is predictable from beginning to end. Even if you haven’t watched the trailer, which gives a small reveal toward the beginning away, you will probably figure out what is going on pretty quickly. Tim, played by David Spade, thinks he is texting the girl of his dreams that he recently met. But instead, he is texting a disaster of a blind date he hadn’t talked to in weeks.

Long story short, he ends up inviting her on a work retreat to Hawaii, and doesn’t realize his mistake until she sits next to him on the plane. Missy, played by Lauren Lapkus, has no idea that she was wrongly invited, and thinks she is Tim’s girlfriend. 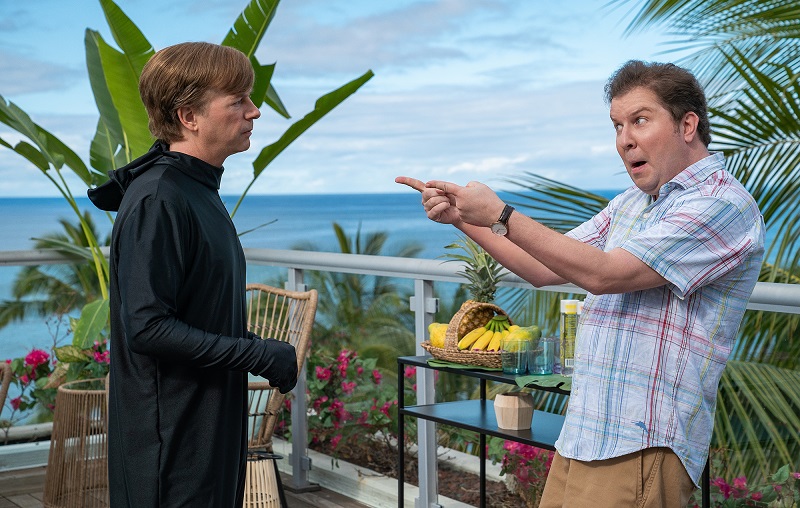 It comes as no surprise that she stirs the pot at his work retreat, and makes several scenes. From doing physic readings, to falling off a cliff, to throwing up in the water and luring in a giant shark — Missy makes her presence known. The problem is that each of these things were meant to be funny, but they weren’t.

As the movie goes on, it is clearly obvious what is going to happen. And if you don’t predict it, you just aren’t paying attention. Of course we get the group of usual actors in this movies like Nick Swardson, Rob Schneider, and Jonathan Loughran, but even they couldn’t save The Wrong Missy.  Maybe I am getting older, these movies are getting dumber, or this one was just a rare misstep.

I thought for sure that I would at least enjoy The Wrong Missy. Some of my favorite actors are in it and I was expecting a feel good film. Instead, I was constantly looking at my watch waiting for it to end. The longer it went on, the dumber and more predictable it got.

I am a huge David Spade fan, and I loved Lauren in Crashing, so I was really hoping for at least an entertaining movie. I certainly wasn’t expecting it to be fantastic or award winning, but I expected to laugh. And I didn’t.

I was looking for some fun entertainment to pass the time in this crazy world. But I lost an hour and half of my life that I can’t get back. The Wrong Missy is not only predictable, it isn’t even a fun ride along the way. Joke after joke falls flat making this one not worth a watch. No matter how desperate you might be for new entertainment. Skip this one and choose anything else to watch instead. Trust me.

About The Wrong Missy

When Tim Morris meets his dream girl and their relationship quickly escalates through texts, he throws caution to the wind and invites her to his company’s corporate retreat on an island resort… However, when a past blind date from hell shows up at the airport for the weekend getaway instead, he learns too late that he’s been texting “The Wrong Missy”.