SCOOB! is full of humor, heart, action, and a big old dose of nostalgia! It perfectly captures the feel of the shows while telling a totally different type of story.

I grew up watching Scooby-Doo, and have since raised my daughters on it. So we were super excited to check out the new movie SCOOB!. I thought this was going to be an origin story, which are always MEH for me, but it wasn’t. Instead, it is full of action, laughter, and heart — three things that help make it a slam dunk movie!

At the beginning of SCOOB! we finally see how Scooby and Shaggy met, but it isn’t an origin story. We also learn how they became friends with Daphne, Fred, and Velma – -and how they solved their first mystery. but the story doesn’t end there. In fact, that is only a small part of the movie, which I am honestly really thankful for.

Origin stories are always hit or miss, especially when it comes to a group of characters that many people know well already. SCOOB! gives us just enough of the beginning of the friendship so that we truly understand it, and then jumps ahead to the real story. 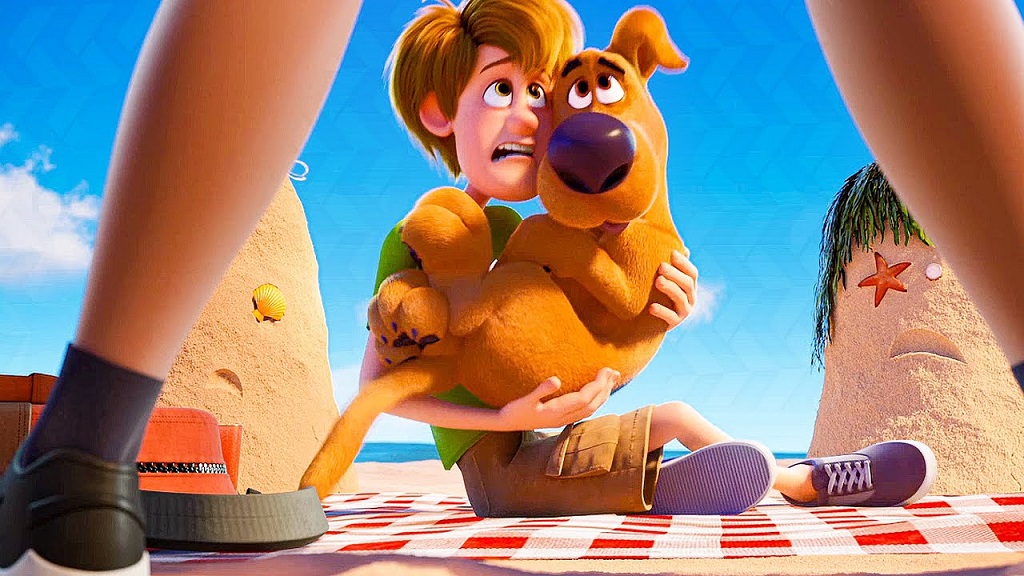 A Big Dose Of Nostaliga

I would be lying if I said when the theme song played I didn’t get chills. Because I did. Lots of them. Complete with goosebumps. This movie was all about nostalgia for me. Not only do we get Scooby-Doo and the gang, the villain is Dick Dasterdly (yes, we get some Muttley clips too). PLUS Captain Caveman makes an appearance. Anyone who grew up watching these characters like I did, is sure to enjoy SCOOB!.

Dick Dastardly has always been one of my favorite characters from Wacky Races. I mean, how could he not be. As you probably already know, I am a big fan of villains — and he wears purple so…. I am a big fan. I loved seeing him as the big baddie in SCOOB! and I think he was perfectly portrayed. Watching him in this made me determined to show my children many, many clips of Wacky Races so they can learn more about him.

What Scooby-Doo movie wouldn’t be complete with classic lines like “Zoinks!“, “Jinkies!“, and “I would have gotten away with it too, if it wasn’t for you meddling kids…“. Every time we heard one of these things I smiled from ear to ear. They were always worked in so well too. They just…fit. Check out my other favorite SCOOB! quotes.

SCOOB! is just about as action packed as an animated film can be. There are multiple battles against villains (all kid appropriate of course), and some super adorable evil robots. My personal favorite though is Blue Falcon and his team. You all know how I feel about superheroes so this shouldn’t come as a surprise to you at all.

Blue Falcon’s team consists of himself, Dee Dee Skyes, and Dynomutt — and they are a group that should not be messed with. They have a lot of cool gadgets that help them hold their own in a fight, multiple times.

Anything To Watch Out For?

SCOOB! is very clearly a kids movie — but if you have sensitive young ones, just be  ready with some tissues. I wasn’t prepared to cry at all during this movie, but found myself tearing up several times. My daughters on the other hand? They were both a sobbing mess — at multiple moments.

Does that mean that kids should not watch this movie? Absolutely not. The moments are few are far between, and resolve themselves pretty quickly. In fact, just the opposite is true. I think this is a fantastic movie for kids that will teach them what friendship is all about.

Friends will grow up and change, but doesn’t mean you have to grow apart. Friendship is something that should be held sacred. In SCOOB! we get to see just how strong the bond between Scooby and Shaggy is. And it is extremely heartwarming.

SCOOB! perfectly captures the feel of the original Scooby-Doo series, while also telling a totally different story at the same time. This isn’t the typical Mystery, Inc. mission that fans are used to. Dare I say, it could be better?

We learn a lot about Scooby and Shaggy’s friendship in the midst of a crazy adventure that neither of them ever expected to be on. SCOOB! is fulled with action, humor, and heart, which makes it a must see family film.

This is a movie that we are sure to watch time and time again. Right now you have the option to rent or buy it, and honestly, I would purchase it. You are almost guaranteed to watch this movie more than once, making it totally worth it. Plus the soundtrack is sure to have you dancing in your seat — or around your living room!

With hundreds of cases solved and adventures shared, Scooby and the gang face their biggest, most challenging mystery ever — a plot to unleash the ghost dog Cerberus upon the world. As they race to stop this global dog-pocalypse, the gang discovers that Scooby has a secret legacy and an epic destiny greater than anyone could have imagined.

SCOOB is available to rent or own today!