Aladdin is probably my favorite Disney animated movie of all time. When I was a young girl, I had the VHS that I wore out, twice. And then the cassette tape. That I wore out. Three times. My friends and I would put on shows for our parents where we would sing the songs, and sit on a makeshift magic carpet. We did this multiple times. So I am hyped that Aladdin is joining the Walt Disney Signature Collection — it deserves it!

I was excited and nervous all at the same time that they were making a live action Aladdin, but ultimately I loved it. That home release is timed perfectly with this one, but that is another post for another day.

In 4K for the First Time, The Animated Classic “Aladdin” Joins the Walt Disney Signature Collection on Digital, 4K Ultra HD™ and Movies Anywhere Aug. 27 and on 4K Ultra HD™ and Blu-ray™ Sept. 10 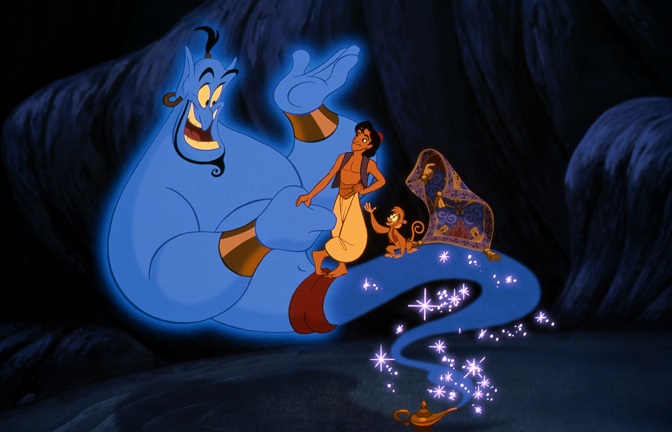 Broken record, I know, but I LOVE the bonus features on a home release. Honestly, they are the major reason I end up purchasing a film. With the Aladdin Signature Collection, I was most excited for the sing along. And I am proud to admit that I totally didn’t need any of the words on the screen — I got every lyric right!

I also really enjoyed the alternate endings! No spoilers here because this is something you need to watch for yourself. But wow, things could have been different! My oldest daughter loves to draw, so she is a big fan of the Genie drawing lesson! So cool…

My nephew loved the live action Aladdin. I would love for him to see the animated movie. I hope that I win.

Good Luck 🍀 everyone! Today is the last day of this amazing giveaway! I am totally stoked!! Thank you Mama’s Geeky.com!! 😍

I just cannot believe that you were old enough to wear out your Aladdin VHS, twice. And then the cassette tape too! You look really young! Well it’s a good thing that they don’t make VHS 📼 tapes anymore 😎

I learn something new everyday! My grandkids like the show “Fuller House”. with D.J., Stephanie and Kimmy from Full House. I never knew that Scott Weinger was the voice of Aladdin for almost 30 years!! I still am amazed that Disney’s movies are being remade and are better than ever!