I am a huge gamer, and when it comes to gaming audio, I only trust Turtle Beach for my headsets! The Recon 70 is a must for any gaming addict like me! Even casual gamers will love these headsets. Here’s why.

I used to love playing Sonic the Hedgehog video games (OK, I still do), so you know I have been excited for the 2019 Sonic the Hedgehog movie since I first heard about it. Well, we finally got the trailer and while there are some issues with it, I am excited. Keep in mind it is still early – the movie doesn’t come out until November – so things can be changed. Jim Carrey is pure perfection in this trailer, and I feel like he will make the movie. 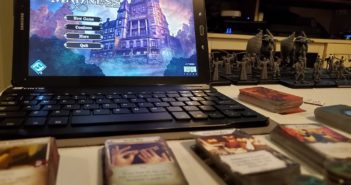 Mansions of Madness Review: Why My Family of 4 Loves This Game

My family loves to game together. We enjoy all types of games, especially video games and board games. But our newest favorite is a combination of both of these – Mansions of Madness. The last few Sundays have become our day to play and we have loved the bonding experience. This is a co-op game, so it is one that we play all together. The box says ages 14+ because it is super creepy – I mean, we are fighting monsters and creatures – but my girls are 6 and 7 and they LOVE it.

Why Star Wars: Jedi: Fallen Order is a Must Buy Game

I am a big gamer, and so is my entire family. We are also huge Star Wars fans so when I found out that the new Star Wars game Jedi: Fallen Order was going to have a panel at Star Wars Celebration, I had to be there. What I saw at the panel, has me so HYPED for this game. I cannot wait to get it in November and take a week off to just sit and play it (I wish). The story line, the characters, and those Purge Troopers won me over.

Fallout 76 Was Nowhere Near What I Had Hoped For

I was so excited when Fallout 76 was announced. One of my favorite series ever, turning into an MMO format, what more could I want? Well, I have to admit, it was not at all what I had hoped for. I got bored. Fast. I got annoyed. Often. Because I am such a completionist, I don’t often get into a game right away, because I am usually finishing up another one. Red Dead Redemption 2 came out right before Fallout 76 and I planned to go back and forth between the two.

One of my favorite past times is playing video games. A lot of great games have come out this year, and I quickly became addicted to Red Dead Redemption 2. I am a total completionist when it comes to gaming, so that is why I have a love/hate relationship with it. Part of me wants to finish the story and see what is going to happen next while the other part of me wants to collect every single plant and complete every single side mission.

Why The Entire Family Will Love Starlink: Battle For Atlas

Everyone in my family is a gamer. We often spend our weekends together playing games – and we recently found a new favorite. Starlink: Battle for Atlas is a game that all of us have been enjoying! From my 5 (almost 6) year old daughter, to my husband. There is something for everyone when it comes to Ubisoft’s Starlink, including amazing upgrades and visually stunning graphics!

Step In To The Internet With Ralph & Vanellope in Ralph Breaks VR!

My family spends lots of time down at Walt Disney World, and this last trip we were really close to checking out The VOID. It was a Star Wars virtual reality experience and we would have gone for sure if our daughters were old enough. So imagine how excited I was when I found out during the Ralph Breaks The Internet Event we would be checking out the new Ralph themed experience! It was all I could have hoped for and more, and now I can’t wait to take my girls and husband to experience it soon. Ralph Breaks VR launches November 21st, along with the movie, and pre-sale tickets are available now.

Why We Love the New Luigi’s Mansion for Nintendo 3DS!

One of my favorite video games is Luigi’s Mansion, so I was super excited to find out they were making a Nintendo 3DS version. I just couldn’t wait to share it with my daughters – and when Nintendo offered to send me a copy, I jumped at the chance. To help celebrate the release of this awesome game, they also sent us a special Poltergust 3000 flashlight (just like Luigi’s) and a Luigi costume!

As you likely already know, we are a family of gamers. Some of our favorite video games are the ones we can all play together. Our current favorite? Super Mario Party for Switch! We were so thrilled to be offered a copy to review, and I pretty much knew we would love it before we even tested it out. Mario Party has always been a favorite of the Smith family, and we have been playing on the Wii U for a very long time. So is Super Mario Party for Switch worth picking up? Even if you have it for other systems? The answer is YES! And here is why.

Previous 1 2 3 4 5 6 … 14 Next
We use cookies to ensure that we give you the best experience on our website. If you continue to use this site we will assume that you are happy with it.OkRead more