The Mad Women’s Ball explores the corrupt system that mental health facilities were built on and while it is intriguing, there are some misses here too.

The Mad Women’s Ball is unafraid to dive into a dark and corrupted system that the mental health care system was built on. These poor women are very much controlled by men, and messed with by them throughout the film. There are many moments that are absolutely heartbreaking and painful to watch — anyone who has been abused in the past can certainly be triggered.

While the story is an important one to tell, there are some swing and misses in this film that can take audiences right out of it.

In this film, a young woman named Eugénie has realized that she can communicate with spirits, with dead. When she confides in her family they have her committed to a mental institution. Here she meets many other women, of all ages, with a variety of ailments. She connects with one of the nurses there, Geneviève, claiming to be able to talk with her sister who has passed.

As the story goes on it becomes more and more sickening how the women are treated by the staff, and especially by the collection of male doctors who would much rather abuse them, than help them.

Why this title? The whole film is leading up to a ball that the hospital is putting on. Where they will allow the patients to dress up and let loose for a night. However, the things that happen that evening are quite horrible.

What Works With The Mad Women’s Ball

Hands down the best part about The Mad Women’s Ball is Lou de Laâge, who plays Eugénie. She steels nearly every single scene she is in, and acts circles around the other girls — except perhaps Lomane de Dietrich. Dietrich plays Louise and while she is not in the film as much, she shines brightly when she is in it. Her character goes through quite the character arc from bright, bubbly, and excited to…well… not. Her role is small, but becomes one of the most captivating ones in the film besides the lead.

This period piece feels very believable because of the detailed costumes and sets. There was clearly a lot of research put into this, and every detail works, right down to the instruments in the doctors’ room.

What is most disturbing about this film though is the story it tells. Yes, these things really happened, and it is clear that is meant to be the focus and the lesson of it all, but there are times where it is so graphic it is hard to watch. Sometimes I found myself looking away from the screen waiting for a scene to end — this happened mostly during the scenes with the doctors. They take advantage of these women who cannot defend themselves time and time again, and it is very difficult to see play out before your eyes.

What Doesn’t Work With The Mad Women’s Ball

Mélanie Laurentas not only plays Geneviève, she wrote and directed this film. Therein lies the issue with her character. It feels like she was so caught up in trying to do everything, that there are moments where she slipped on screen and behind the camera. The Mad Women’s Ball almost feels like two different movies at times, as the direction drastically changes between the quite moments, and the intense ones.

The beginning of this film is extremely slow and it isn’t until Eugénie finds herself in the hospital the story and pacing pick up. To be honest, the first twenty minutes is a struggle to get through, but worth it if you can power through. Her budding relationships with the other women are what makes it more and more enjoyable as it goes.

Being a foreign film there are subtitles. Looking away from the main conversations to read them and take them in, can sometimes take the viewer out of the movie itself. When things are happening quickly, it is easy to miss small details in the shots because you are focusing on the words at the bottom of the screen.

Should a dubbed version come out, that might be the one to try out first — although there is always more of a passion to it all when the film is watched in its original language. So this is sort of a double edge sword for those who do not speak French fluently. 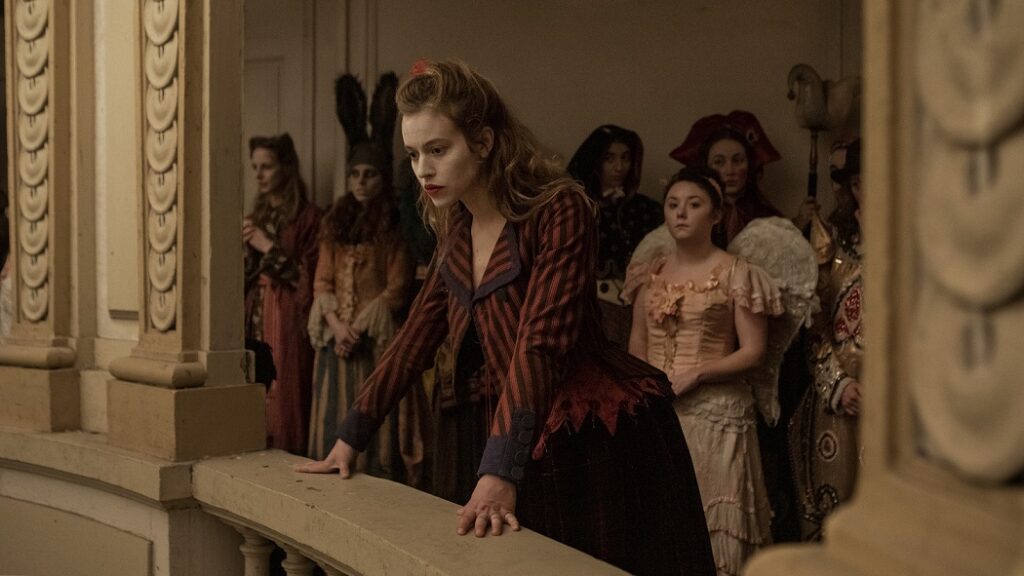 The Mad Women’s Ball is a movie that tells an important story, even if it is hard to watch at times. It is unafraid to dive into the past of mental health care, and go right for the gut. It puts doctors of that time on blast for mistreating and using young women, whether they are truly ill or not.

One of the best parts about this film is the focus on the relationship these women have with each other, and the fact that they are all willing to step up to protect another, no matter what might happen to them.

The biggest problem with it is that one of the stars is also the writer and director. While sometimes this works out because a story is so personal to someone, sometimes it a case of doing too much and everything suffers for it. Unfortunately, the latter is the case here.

This film is certainly a struggle at times, but luckily Lou de Laâge saves it with her incredible on screen presence. The Mad Women’s Ball clocks in at just over two hours, which is far too long. If it was cut down by 20 to 30 minutes it would play out much better. Still, if you can sit through the slowness and uncomfortable moments, this is one worth checking out.

About The Mad Women’s Ball

The Mad Women’s Ball (Le Bal des Folles) tells the story of a young, radiant and passionate woman, Eugénie, living during the close of the 19th century. As a young woman, Eugénie discovers that she has the special power to hear the dead. After her family discovers her secret, she is taken to La Pitié Salpétrière Hospital without any way of escaping her fate.

The hospital is a neurology clinic in Paris run by the famous professor and pioneer of neurology Dr. Charcot, where women diagnosed with hysteria, “craziness”, egomania, epilepsy and other types of mental or physical diseases are committed.

Her destiny becomes entwined with that of Geneviève, a nurse at the hospital whose life is passing her by. Their encounter will change both their futures as they will prepare for the annual “Bal des folles” organized by Dr. Charcot at the hospital.

The Mad Women’s Ball played at TIFF 2021 and comes to Amazon Prime Video on September 17th.