In this interview with the cast who plays the future day characters in The Tomorrow War they discuss their filming challenges and more.

KEITH POWERS and YVONNE STRAHOVSKI stars in THE TOMORROW WAR

In The Tomorrow War a group of soldiers from the future come to the present day in order to recruit people to help them take on a an alien threat, that is destined to destroy the planet. Chris Pratt stars as Dan Forester who is one of those selected individuals. In this cast interview, the actors who play the characters from the future characters discuss the filming challenges they had, what drew them to their roles, and more. The Director Chris McKay also joins the press event.

When asked about the themes of The Tomorrow War, Keith Powers immediately jumped in with what he felt is so super cool about this movie, that he knew he had to be a part of it. The fact that it has several elements to it reminds him of underground music being on the radio. “It’s like underground music meets that radio song. It’s like a radio song with great lyrics. It’s like you’re getting all of it. You can listen to it every day, but you’re getting some game every single time you listen to it. That’s how I feel about this.”

Jasmine Mathews jumps in to explain the sense of hope that she got from the script, and why she is excited for the world to see it. “I would love for people to be able to take that message of – we have this idea of everyday regular people coming together dedicated to one mission, and everyone has their purpose. Everyone has something that they can do to help save the world. You need a Norah [Mary Lynn Rajskub], you need a Cowan [Mike Mitchell] to do what they did in order for the world to be saved as well. It’s this idea that it’s going to take all of us together, focused, and dedicated to save the world and make this a better place. I just love that idea, that unity aspect to it.”

Yvonne Strahovski completely agrees with what everyone else said, and about how important the unity factor is in this movie, and that it is something she hopes the audience takes away from it. “The unity factor is really interesting coming out of the pandemic and how we’ve all been unified during this time of isolation, and how this maybe comes at a really good time where it echoes where we’ve been, and hopefully, where we should go. To really focus on the environmental aspects that we face all together as a people and the reality that we live in now.”

There are a lot of visual effects in a movie like this, which means that the cast is using their imagination for the majority of filming. Obviously there are not blood thirsty aliens coming after them, and most of the time the stunts are not as intricate as they look.

“The hardest thing I had to do was just fall on accident. I don’t know how you make that look real, that you’re pulling something without literally having it. Even when we would do it without the rope, I found myself getting sore because I was just trying to do so much physical movement within myself.” – Keith Powers

“That was my favorite part, being able to use my imagination too. It allows your inner child to come out and play. Given the times where I couldn’t pull from my imagination and my image of the white spikes, I would just substitute somebody who pissed me off and I never could reconcile my emotions with them, I put them up there and just take all my anger out on them, which was really fun.” – Jasmine Mathews

What Do You Owe The World?

Director Chris McKay says that the important part of the script for him was touching on the theme of what do you owe the world? Do you sacrifice the years that you have left in order to leave it a better place for others? Or do you simply try to push that out of your mind and carry on with your life?

“I love genre movies – science fiction, action movies, and horror movies. That’s the stuff that the little kid in me that wanted to make, that’s the thing that I responded to, but also I’m caught somewhere between John Carpenter and John Cassavetes. There’s always a little bit of the human story and the drama. To have an original sci-fi movie that can have a big epic scope and amazing performances with a beautiful cast, but also can have a little bit of heart and a little bit of something to think about – that was why I wanted to do this since it was real. The script in this cast and crew was a real gift.” – Chris McKay 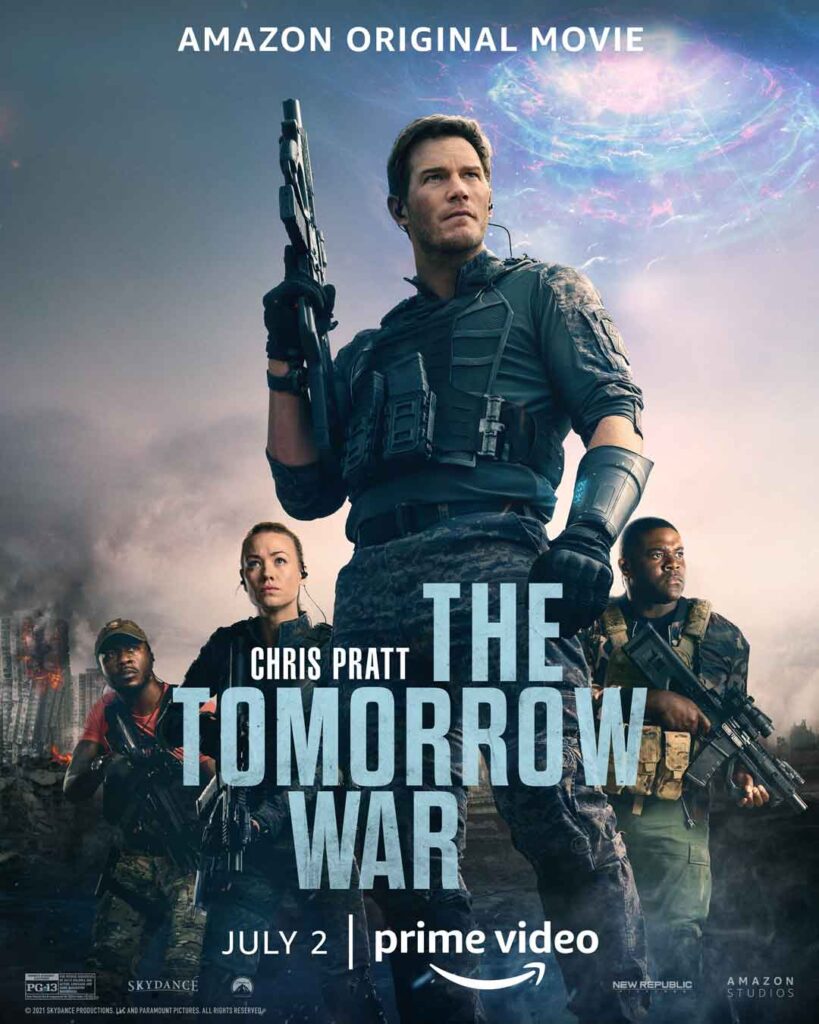 About The Tomorrow War

In the thrilling science-fiction action adventure The Tomorrow War, the world is stunned when a group of time travelers arrive from the year 2051 to deliver an urgent message: Thirty years in the future mankind is losing a global war against a deadly alien species. The only hope for survival is for soldiers and civilians from the present to be transported to the future and join the fight.

Among those recruited is high school teacher and family man Dan Forester (Chris Pratt). Determined to save the world for his young daughter, Dan teams up with a brilliant military scientist (Yvonne Strahovski) and his estranged father (J.K. Simmons) in a desperate quest to rewrite the fate of the planet.

The Tomorrow War comes to Amazon Prime Video on July 2, 2021.