Cherry is an absolutely heartbreaking and powerful movie about the effects of drug addiction and PTSD, in which Tom Holland showcases his talents.

Tom Holland is one of my favorite actors and I love the Russo Brothers as directors, so you know I was in for Cherry from the second I heard about it. If there is ever a movie that can showcase all of Tom Holland’s talent, Cherry is it. WOW. This movie is basically four movies in one — a romantic comedy, a war film, a drug movie, and a heist flick — which is not necessarily a bad thing. However, it does mean that it is long so that all the stories can play out.

It should be said that you need to be in the right mindset when you sit down to watch Cherry. It touches on some really heavy and deep topics like trauma, PTSD, metal health, and drug addiction — so please keep that in mind. Even for someone like me that has not dealt with any of these things, some moments were hard to watch. Which really just goes to show how well done the movie is.

In this movie Tom Holland plays Cherry, a young man who you see go through a whole lot in this movie. He starts off meeting the love of his life, then he joins the Army when she breaks his heart. After a hard stint in war as a medic, he comes home dealing with the effects of the horrors that he has seen. This leads him to a path of drug addiction, which causes him to start robbing banks in order pay for his vice.

What Works With Cherry

So what works best in this movie? Tom flipping Holland. In order to pull something like this off, the casting needed to be perfect. And it is. Cherry is long – clocking in at nearly two and a half hours. So without the right story or the right leading man, a lot of viewers wouldn’t make it through to the end.

Tom Holland perfectly portrays this young man in each and every step of his life. The looks in his eyes sell it all – love, fear, desperation. I knew that he was a talented actor, but this movie proves it. He carries it on his shoulders and because of him, this is a good movie. Without him, I am not sure Cherry would have accomplished what it sets out to do.

The score and the cinematography take this film to a whole new level as well. The music choices flawlessly escalate certain scenes to a whole new level of emotion. I enjoyed the cinematography throughout the entire movie, but probably mostly in the war section. Although, there is a scene early on where Cherry is on drugs, and what was done with the colors makes it one of my favorite moments of the film. 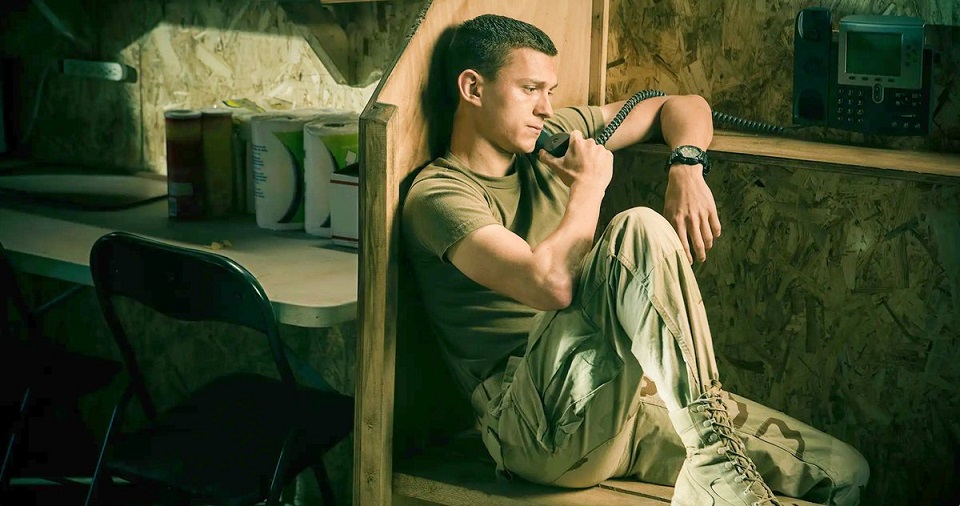 What Doesn’t Work With Cherry

One of the biggest faults with this movie is how long it is. I understand that the length is needed in order to fully tell each aspect of this story, but it feels like four films in one, and I am not sure that was necessary. It is even split up by title screens such prologue and epilogue.

The script probably could have been tightened up a bit to get Cherry closer to that two hour mark. Even though the story didn’t drag, per se, the movie itself feels quite long and this would have fixed that issue.

Honestly, I think the biggest problem with the movie is the length and the fact that it feels like so many movies put into one. Cherry likely would have worked better as a four part miniseries. All that being said, I will be watching this again.

It should also be noted there is some aging up toward the end that is not done well. It looks a bit silly, in my opinion, and should have been fixed before making the final cut.

Cherry is an absolutely heartbreaking movie, whether you have dealt with drug addiction or PTSD in your life or not. Tom Holland does a great job of laying it all out there on the screen and there are moments that feel so real, they will give you goosebumps and touch your soul.

Even if you are not a fan of Tom Holland or the Russo Brothers (first of all, how dare you!), this is a movie that you should watch. It is powerful and sheds light on issues that this country is dealing with today. it may not be perfect, but it is close. There is so much to love about this film, most of all, it is Tom Holland’s outstanding performance.

A quick note — of course there is that classic Joe Russo cameo that he loves to do, so keep an eye out for him!

Cherry follows the wild journey of a disenfranchised young man from Ohio who meets the love of his life, only to risk losing her through a series of bad decisions and challenging life circumstances. Inspired by the best-selling novel of the same name, Cherry features Tom Holland in the title role as an unhinged character who drifts from dropping out of college to serving in Iraq as an Army medic and is only anchored by his one true love, Emily (Ciara Bravo).

When Cherry returns home a war hero, he battles the demons of undiagnosed PTSD and spirals into drug addiction, surrounding himself with a menagerie of depraved misfits. Draining his finances, Cherry turns to bank robbing to fund his addiction, shattering his relationship with Emily along the way. Brought to the screen in bold, gritty fashion by visionary directors Anthony and Joe Russo, Cherry is a darkly humorous, unflinching coming-of-age story of a man on a universal quest for purpose and human connection.