The Falcon and The Winter Soldier is coming to Disney+ in March of 2021 and to help you prepare, here are 5 comic books you should read!

There are a whole lot of angles that The Falcon And The Winter Soldier can take, and here are the comic books that will help you get to know these characters a bit more. Of course, we know them fairly well from their time in the MCU, but that doesn’t mean they won’t pull some story lines from the comic books for this one.

The Falcon And The Winter Soldier Comic Books

Here are 5 comic books that I think could have potential tie-ins to the series, but even if they don’t, they are totally worth reading! Enjoy!

An office of dead government agents. A gifted new killer. Two ex-Captain Americas…When a dramatic attempt on the life of Bucky Barnes reunites him with Sam Wilson, the two old friends are plunged headlong into a race to uncover the new leader of Hydra before a mass casualty event announces the terror group’s resurgence to the world. The clock is ticking…

Sam Wilson takes flight as the soaring Sentinel of Liberty – Captain America! Handed the shield by Steve Rogers himself, the former Falcon is joined by new partner Nomad to tackle threats including the fearsome Scarecrow, Batroc and Baron Zemo’s newly ascendant Hydra! But stepping into Steve’s boots isn’t easy -and Sam soon finds himself on the outs with both his old friend and S.H.I.E.L.D.! Plus, the Sons of the Serpent, Doctor Malus -and the all-new Falcon! And a team-up with Spider-Man and the Inhumans! The headline-making Sam Wilson is a Captain America for today!

The instant-classic saga that brought Bucky Barnes back from the dead – and introduced the world to the Winter Soldier! The shocking murder of the Red Skull leaves an un-finished Cosmic Cube at large. Adding to the imminent danger, a cadre of the Skull’s followers sets in motion a plan to ignite bombs in the hearts of Paris, London and Manhattan! Racing against the rapidly ticking clock, the Star-Spangled Avenger must not only solve the mystery of his nemesis’ murder but also fi nd the Cube before it can be used to rewrite reality! But who is the Winter Soldier – a lethal killer with an all-too-familiar face? The questions plaguing Captain America’s dreams are answered in the most brutal way possible, tearing open old wounds and threatening to carve new scars that will never heal! 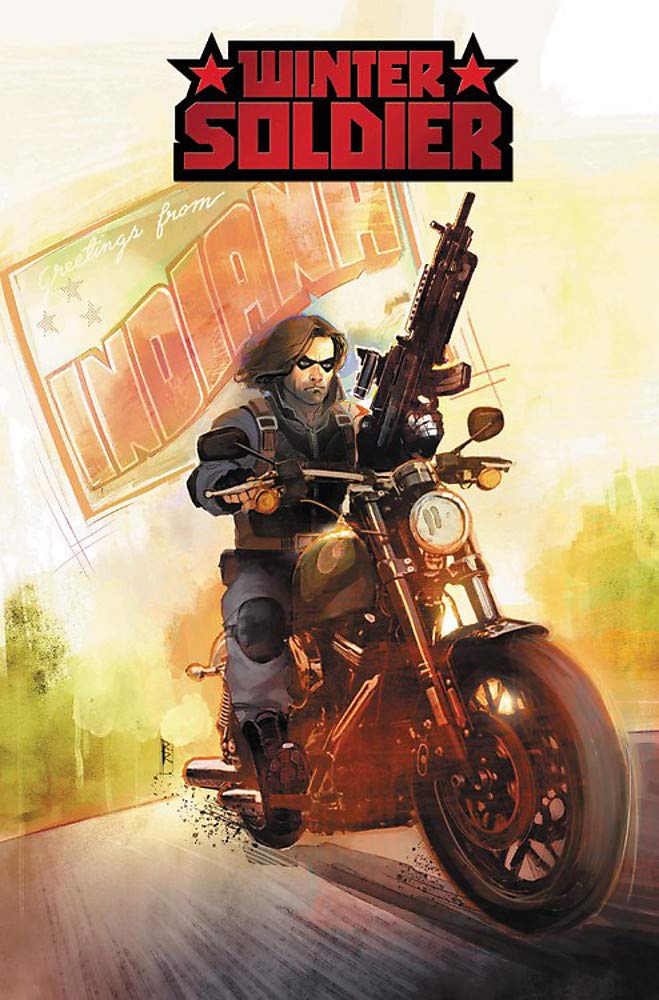 Bucky Barnes believes in second chances. Having survived death, manipulation, loss of identity and a lifetime of murder, the man known as the Winter Soldier has worked hard to atone for his many sins. But now…he’s going to go one step further. What do you do after you’ve found redemption? You help others do the same! Bucky is becoming a “fixer,” working to help others leave behind their lives of crime. It’s his way of channeling his own pain in a productive, personal way…by helping others fi nd the salvation that he has found. But not all paths are the same – and not everyone can be saved…

They’re best friends, teammates, brothers-in-arms – but that bond is tested to the limit when Falcon targets the Rivas drug cartel, and the Super-Sailor known as the “Anti-Cap” sets his sights on Falc! Can Captain America thwart his dark doppelganger before Sam Wilson’s wings are clipped? Fingers crossed, because there’s a Mental Organism Designed Only for Killing out there, and nobody’s better at stopping him than Cap and Falc! But M.O.D.O.K.’s not the only big headache, with the Avengers about to be Disassembled and all. Is this really the best time for Steve to be kissing the Scarlet Witch?

Falcon and the Winter Soldier are a mismatched duo who team up for a global adventure that will test their survival skills — as well as their patience.